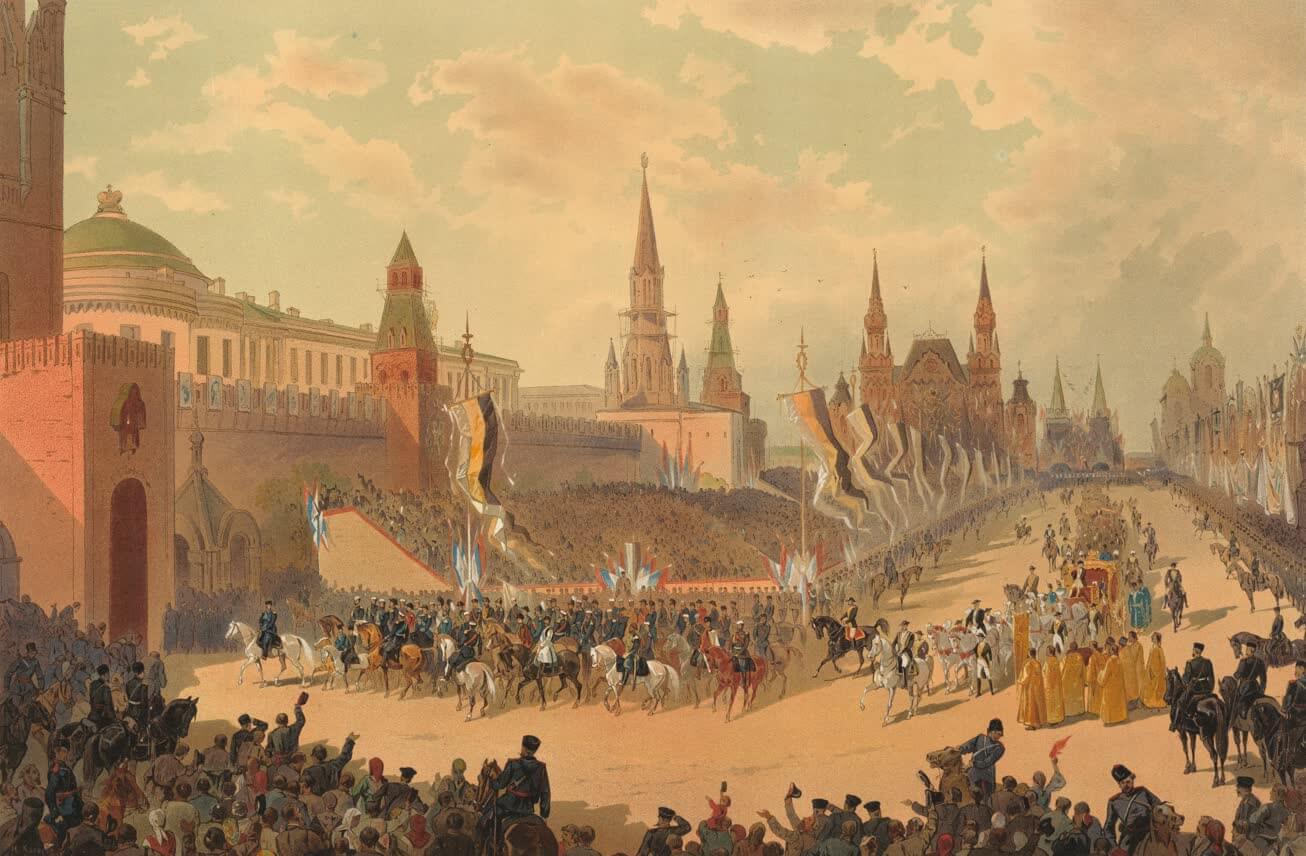 Russia covers a large part of eastern Europe and northern and central Asia, a territory more than twice as large as Europe. Its main divisions are European Russia, with less than a fourth of the whole area but with three fourths of the population; Finland, Poland, Siberia, Caucasia, Turkestan and the Transcaspian region, besides the dependent countries of Khiva and Bokhara.

The entire area of the empire is 8,647,657 square miles, one seventh of the land-surface of the globe. This includes (besides European Russia) Poland, Finland, the Caucasus, Transcaucasia, Turkestan, Siberia, the Transcaspian and the Amur region. The Arctic Ocean made up the whole Russian seaboard, till, at the end of the 17th century, she won the Baltic and Black Sea shores. On the north the Arctic Ocean and White, Kara, Bering and Okhotsk Seas are valuable for fishing and hunting, but these coasts are frozen a great part of the year, and Nova Zembla and the other islands are uninhabited. Vladivostok, at the head of the Gulf of Peter the Great on the Japanese Sea, is one of the finest roadsteads in the world. The chief Russian sea is the Baltic with the Gulfs of Finland, Bothnia and Riga, on which are four of the five chief ports - St. Petersburg, Reval, Libau and Riga. The Sea of Azov is the great gulf of the Black Sea, whose main ports are Odessa, Batum and Taganrog. The Caspian Sea furnishes fish for all Russia; into it falls the largest river of Europe, the Volga.

The Russians are Slavs, and conquered Russia from the west, fighting eastward from the Baltic. However, the name of Russes was first given to Norse warriors who yearly passed through these Slav lands on their way to enter the Byzantine emperor's service at Constantinople. These captains seem to have been asked to protect the Slavs, and one of them, Rurik, with three of his brothers, settled there. Vladimir (980-1015) was baptized a Christian, and soon after his death Kieff, the "mother of the Russian towns," rivaled Constantinople in greatness. Under Yaroslav, who gained control of most of the Russian towns and died in 1054, the first written Russian law was compiled. During the next 200 years the Russians steadily conquered eastward.

Towns and colonies were founded, which in reality were free republics, the only bonds between the different cities being those of language, race, religion and the unwritten law that the prince who was asked to defend a town should be a descendant of Yaroslav. In this period the trading cities of Novgorod, Pskov and Smolensk rose to importance. Slavery existed, though the workers of the soil were its owners, the slaves either being prisoners of war or those who remained in a servant's position for more than a year. In these years also the boyars, the chief warriors, began to gain power, settling the peasants on free lands and making themselves their landlords. Andrei Bogalubski (1157-74) was the prince who changed the center of gravity of Russia from Kieff to the region where Moscow was afterwards founded. He built the city of Vladimir, and plundered and burnt Kieff in 1169. Soon Nijni-Novgorod was founded as a rival of Novgorod, and this region, the home of the Great Russians, grew powerful.

In 1224 the Mongols and Tartars, who under Genghis Khan had conquered Manchuria, North China, Turkestan and Bokhara, won a decisive battle against the Russians on Kalka River. Prom this time Russian princes paid tribute to the khan; their courts, which now had an eastern appearance, were surrounded by Tartars and Mongols; and it was with Mongol help and armies that the rich rulers of Moscow reduced to their rule the formerly independent principalities around them. The Mongol conquest threw Russia 200 years behind the civilization of the rest of Europe, and gave Poland, Lithuania and Livonia a chance to rise into power.

It was in the 14th century under the leadership of Moscow that the Russians first tried to throw off the Mongol yoke. Dimitri Donskoi (1359-89) fought an indecisive battle at Kulikovo, followed the next year by the Mongols for the last time storming Moscow, burning it and killing 24,000 of its people. Ivan III (1462-1505) was the first prince of Moscow to call himself Ruler of all Russia. He conquered Novgorod, and refused to pay further tribute to the khan. A Tartar-Mongol army of 150,000 men, sent to punish him, met the Russians on the Oka, and after a nine months' encampment retreated without fighting, and Russia again was free.

Ivan IV, Ivan The Cruel, was the first to take the title of tsar, and was Russia's first absolute ruler. When at three he came to the throne, the boyars were all-powerful, and a struggle was forced upon him, in which he was successful. Under Ivan's feeble son Feodor (1584-98) the regent Boris Godunoff forbade the peasants to leave the estates on which they worked and thus sowed the seed which grew into the serfdom that cursed the country for the next 270 years. This regent murdered Ivan's son Dimitri. On Godunoff's death a runaway monk, who lived for some time among the Cossacks ("free men"), imposed himself on Russia as the murdered Dimitri. His assassination at the end of a short reign was followed by the conquest of the czardom by Sigismund of Poland. The country was freed by a general rising, started, by Minin, a Nijni-Novgorod merchant, and aided by the Cossacks. The Poles were driven out, and Mikhail Romanov (1612-45), whose grandmother was Ivan's first wife, was chosen ruler.

In the reign of Alexis (1645-76) Russia, chiefly by the aid of the Cossacks, at last gained the upper hand in the long struggle with the rival Slav power of Poland. Up to the reign of Peter the Great (1689-1725) the country had in many respects been Mongol; this able ruler, who first called himself emperor and founded the new capital of St. Petersburg, made it European. He improved the army, started mining and manufactures, imported fine breeds of cattle, set up schools, and dug Russia's great system of canals. The ministers, Menschikoff under Catherine I and Dolgoruki under Peter II, were the real rulers of those reigns. The power of the German party under Anne (1730-40) and Ivan (1740-41) was lost on the accession of Elizabeth (1741-62). Peter III, who by sending his army to the support of Frederick the Great against Austria saved Prussia from dismemberment, was dethroned by Catherine II (1762-96), whose wars and the first partition of Poland widened Russia's domains in all directions. The excessive tyranny of Paul I (1796-1801) brought about his murder.

In the reign of Alexander I (1801-25), the famous friend and enemy of Napoleon, took place the French invasion and the burning of Moscow. Under Nicholas I (1825-55), was fought the Crimean War. Alexander II (1855-81) freed the serfs and initiated many other reforms, which were brought to a sudden close by the insurrection of Poland (1863) and the rise of the Nihilists, who assassinated him on March 13, 1881.

The reign of Alexander III (1881-94) was marked by the famine of 1890-91 and the crusade against the Jews, who were ordered to leave Moscow, Warsaw and other cities and go back to their native provinces.

Nicholas II, the last Russian emperor, ascended the throne on the death of his father, Nov. 1, 1894. His reign was marked by the war with Japan, which began on Feb. 7, 1904, and closed on A?g. 29 1905. The result was disastrous to Russia. She lost 375,000 men in battles on land and sea, her navy was destroyed, and in settlement she surrendered to Japan her rights in Manchuria and ceded half of Sakhalin. There followed a determined revolt throughout the empire against the government. This revolution has so far resulted in important popular concessions, including the establishment of the Duma as already mentioned.

Rambaud's History of Russia and Edwards' The Romanoffs.