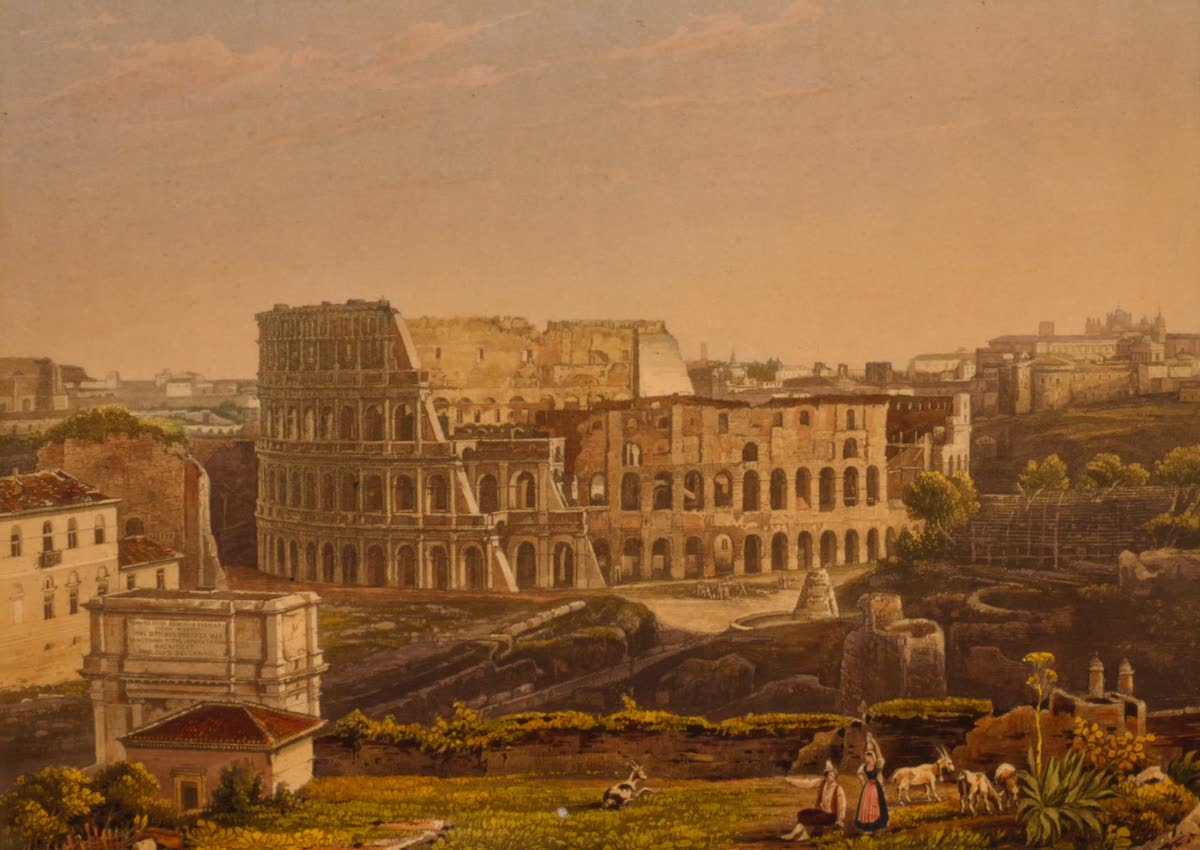 The history of Roman civilization began as an Italic settlement in the Italian Peninsula, conventionally founded in 753 BC, that grew into the city of Rome and which subsequently gave its name to the empire over which it ruled and to the widespread civilization the empire developed. The Roman Empire expanded to become one of the largest empires in the ancient world, though still ruled from the city, with an estimated 50 to 90 million inhabitants (roughly 20% of the world's population at the time) and covering 5.0 million square kilometers at its height in AD 117.

Through conquest and assimilation, it eventually dominated the North African coast and most of Western Europe, the Balkans, Crimea and much of the Middle East. It is often grouped into classical antiquity together with ancient Greece, and their similar cultures and societies are known as the Greco-Roman world.

Ancient Roman civilization has contributed to modern language, religion, society, technology, law, politics, government, warfare, art, literature, architecture and engineering. Rome professionalized and expanded its military and created a system of government called res publica, the inspiration for modern republics. such as the United States and France. It also achieved impressive technological and architectural feats, such as the construction of an extensive system of aqueducts and roads, as well as the construction of large monuments, palaces, and public facilities. Many of these ruins still exist today and are common tourist attractions.

To give an adequate history of this mighty nation from the alleged founding of Rome by Romulus in 753 B.C. to the taking of Constantinople in 1453 A.D. would require many volumes. Concerning the early settlement of Italy it is impossible to form definite conclusions; but we seem at least warranted in affirming that at a very remote period a race emigrated from the east, embracing the ancestors both of Greeks and Italians; and Mommsen the historian's statement that "the Italians, like the Indians, entered their peninsula from the north" may be regarded as certain. But in addition to the so-called Italian races, there settled in Italy in prehistoric times the lapygians, the Etruscans, the Greeks and the Gauls, and from the mingling of all these came the people of Rome. Recent investigations have shown the story of Romulus and Remus to be a mere myth; but it is probable the city was founded before the time when it is alleged that they were suckled by a she-wolf.

Perhaps the most rational view of the city's origin is that suggested by a consideration of its site. It probably was first built as a defense against the Etruscans and as an emporium for river-traffic; but whether it was founded by the Latin confederacy or by the enterprise of an individual chief is beyond even conjecture. The motives which led to the founding of Rome also caused its rapid development, so that the beginnings of Roman history - if the ancient legend may be called history - mainly are records of the city's expansion and growth. An accurate history of the early Roman state is out of the question, as the traditions concerning the first four kings are too mythical to form the basis of sober narrative; but with the fifth king, Tarquinius Priscus, a marked change takes place, and we can at least feel that we are beginning to leave the field of tradition and approach that of history. The expulsion of the younger Tarquin about 509 B.C. in revenge for the outrage on Lucretia marks the overthrow of the monarchy and the establishment of the so-called republic which continued nearly 500 years.

The history of Rome from the establishment of the republic to the abolition of the decemvirate, 449 B.C., was chiefly military, as the Romans were engaged in constant wars with their neighbors, especially the Etruscans. These conflicts continued until 295 B.C., when the final victory over the Samnites and Etruscans ended the struggle and brought all Italy under Roman dominion. Having thus extended her power over Italy, it was but natural that Rome should become involved in wars with foreign nations; and in 264 B.C. began the terrible contest with Carthage, which comprised three separate wars, known as the three Punic wars, which closed only with the complete destruction of Carthage more than a century later. In connection with the Punic wars began the Macedonian wars - also three in number - which ended with the battle of Pydna, 168 B.C., in which the Macedonian empire was completely broken up. According to Polybius the full establishment of the Roman empire was achieved at Pydna, as this was the last battle in which she was confronted by a civilized nation; all her subsequent wars were against rebellions of her own provinces or in contests with so-called barbarians.

The subsequent history of the republic - the war with Jugurtha, the Servile wars, the civil wars of Marius and Sulla, the campaigns of Julius Caesar, the civil wars between Caesar and Pompey and the final assumption of power by Octavius Caesar under the title of Augustus-has been given under appropriate heads, and need not be repeated here. When Augustus died, 14 A.D., the Roman empire extended in the north into Germany beyond the Rhine; in the east the boundary line was the Euphrates; in the south Egypt and northern Africa as far west as Morocco and as far inland as Fezzan and Sahara acknowledged the Roman authority. The subsequent reigns of Tiberius, Caligula, Claudius and Nero are little more than the record of conspiracies, assassinations and acts of tyranny; but the with reign of Vespasian, 69 A.D., a better era commenced, which, if we except the reign of Domitian, continued for the next hundred years and comprised the reigns of Titus, Nerva, Trajan, Hadrian and Marcus Aurelius, the latter of whom, especially, was one of the wisest and most beneficent rulers the world has known. Nothing is clearer than the fact that after the time of Vespasian the worst days of Rome were over. Never again did she give way to the immorality and corruption of the first century.

During the rule of Valerian, Gallienus and the so-called Thirty Tyrants the empire was chaos, subject to inroads and invasions from barbarians; but with Claudius Gothicus its fortunes begin to brighten. By him and his successors (Aurelian, Probus and Carus) the barbarians both of the north and of the east were severely chastised, and when Diocletian became emperor, 284 A.D., it seemed as if the worst was over; but his division of the empire into east and west led to civil wars, which were brought to a close only by the commanding genius of Constantine. Under Constantine, who reigned from 324 to 337 A.D., Christianity, which had hitherto been despised and persecuted, was established as the religion of the state and taken under the protection of the emperor. Constantine also transferred the seat of government from Rome to Byzantium on the Bosporus, where he founded Constantinople, naming it after himself. From the time of Constantine the political fortunes of Rome possess only a secondary interest, as it is the struggles of the Christian sects and the rise of the church that mainly occupy the attention of the historian.

Christianity did not save Rome from destruction, but it enabled it to endure three centuries of barbarism. Julian's attempts to revive paganism were an utter failure in spite of his abilities as a general and the virtues of his personal character; and in the year after his death Valentinian was acknowledged as emperor by the army at Nicaea. In obedience to the wish of his soldiers he conferred the title of Augustus upon his brother Valens, and the complete division of the empire was at last effected, Valentinian becoming emperor of the west and Valens of the east.

Valentinian, Gratian and Theodosius the Great were rulers worthy of better times; but they struggled against destiny, and their efforts were vain. Theodosius, indeed, subdued and even disarmed the Huns, by whom Rome was invaded; but immediately after, they rose again under Alaric against Honorius, emperor of the west. Rome was saved for the time by the bravery and skill of Stilicho, the imperial general; but after his assassination the barbarians returned, sacked the city and ravaged the entire peninsula.

The murder of Valentinian III occurred in 455 A.D., and Eudoxia, his widow, to be revenged on Petronius Maximus, his murderer and successor, invited Genseric from Africa, thus exposing Rome to the horrors of pillage for days. Ricimer, a Sueve, next figures as a sort of governor over the city and the few relics of empire that it still possessed; for Gaul, Britain, Spain and western Africa had all been wrested from it. Of the four emperors whom Ricimer placed on the throne, Majorian was the only one who had any of the qualifications of a ruler.

Ricimer died in 472, and was succeeded by Orestes the Pannonian. Odoacer in 476, placing himself at the head of the barbarian mercenaries, overthrew the last emperor of the western empire, who, by a curious coincidence, bore the same name as the mythical founder of the city - Romulus. This was the end of the western empire; but for nearly a thousand years thereafter the eastern empire, whose capital was Constantinople, maintained its existence in spite of all the enemies by which it was surrounded, until Constantinople was taken by Mohammed II in 1453.