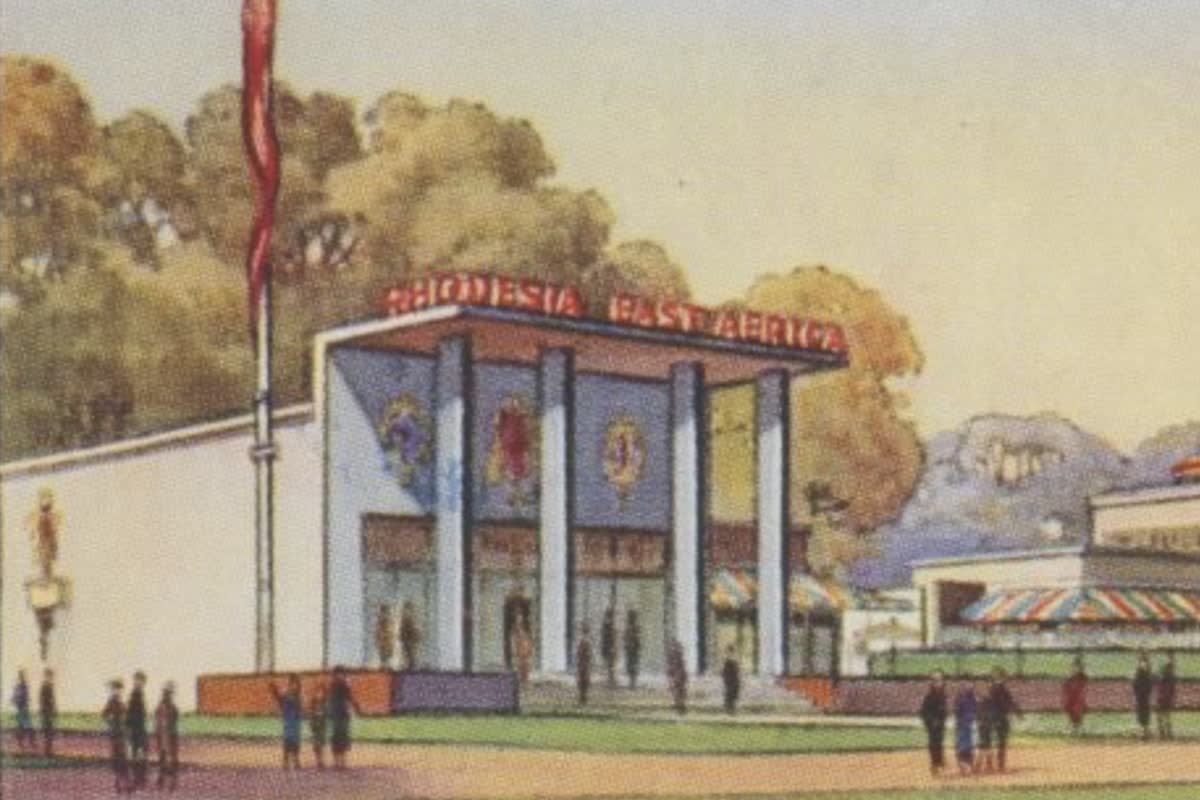 Rhodesia (r?-d?'z?-?), named from Cecil Rhodes, is bounded on the northwest and north by Congo Free State, on the north and northeast by German East Africa, on the east by Portuguese East Africa, on the south by the Transvaal and the Bechuanaland Protectorate, and on the west by German Southwest Africa and Portuguese West Africa or Angola, comprising all the territory formerly known as British South and Central Africa, north of the twenty-second parallel, excepting the British Central Africa Protectorate.

In 1911 there were 11,039 Europeans in the former and 12,543 in the latter province. The entire territory is administered by the British South Africa Company through its administrator and by a resident commissioner appointed by the secretary of state, with executive and legislative councils. Natives and non-natives stand equal before the law except in regard to spirits and arms and ammunition.

Gold-fields with a total estimated area of 5,250 square miles have been discovered in Rhodesia, and 300 companies and syndicates had registered for mining and development work before 1906. Gold to the amount of 231,872 ounces was produced in 1903 and 267,737 ounces in 1904. There are 600 square miles of coal-fields about Wankie, 203 miles northeast of Bulawayo, and a company has been formed for their exploitation. Silver, copper, antimony, blende, arsenic and lead have been found. Southern Rhodesia belongs to the South African Customs-Union.

The railway from Bulawayo to the Wankie coal-fields was finished in 'September, 1903, and 212 miles were thus added to the line up the continent from the Cape. On April 25, 1904, it had been pushed on to the Victoria Falls on the Zambezi, and is heading for Lake Tanganyika across North Rhodesia. In 1906 it was open 374 miles north of Victoria Falls. A branch-line from Bulawayo to Gwanda, 120 miles south, was opened in 1903, and the line to the Matopos the same year. Salisbury is connected with Bulawayo by way of Hartley and Gwelo, and the line from Beira to Umtali has also reached Salisbury, the narrow gauge of the latter having been standardized.

Salisbury is also connected with the Ayrshire mine in the Lomagundi district by a narrow-gauge road, a distance of 84 miles. The Bne between Gwelo and Selukwe is also open for business. The route between Salisbury and Mazoe has been surveyed for immediate construction. Nearly 3,000 miles of railway have been built in northern and southern Rhodesia.

In Southern Rhodesia there are 3,000 miles of post-roads, maintained at a cost of over ^8,000 a year. The Rhodesian telegraph-system, including the African Transcontinental Telegraph Company's lines and those belonging to the police-telephone service, Aggregated 3,984 miles of line and 7,118 of wire, with 99 offices open. Direct communication by wire is opened between Umtali and Beira, and the trunk-line, now 1,600 miles long, has reached Ujiji by way of Blantyre and JCaronga. The telephone systems are extensive. The penny-post prevails, and there are 73 postoffices in Southein and 35 in North Rhodesia.

Northern Rhodesia, formed by the amalgamation of Northeastern and Northwestern Rhodesia in 1911, has an area of about 190,000 square miles and a population of approximately 1,000,000. The Europeans number 1,434. The territory is divided into ten magisterial districts, with administrative headquarters at Livingstone, on the Zambesi. A good road exists between Lakes Nyasa and Tanganyika and the telegraph line runs from Zomba in the Protectorate to Ujiji. The slave-trade has been suppressed throughout the country, and strict regulations regarding spirits and trading with the natives are in force.

There are no works available for the Rhodesia collection.