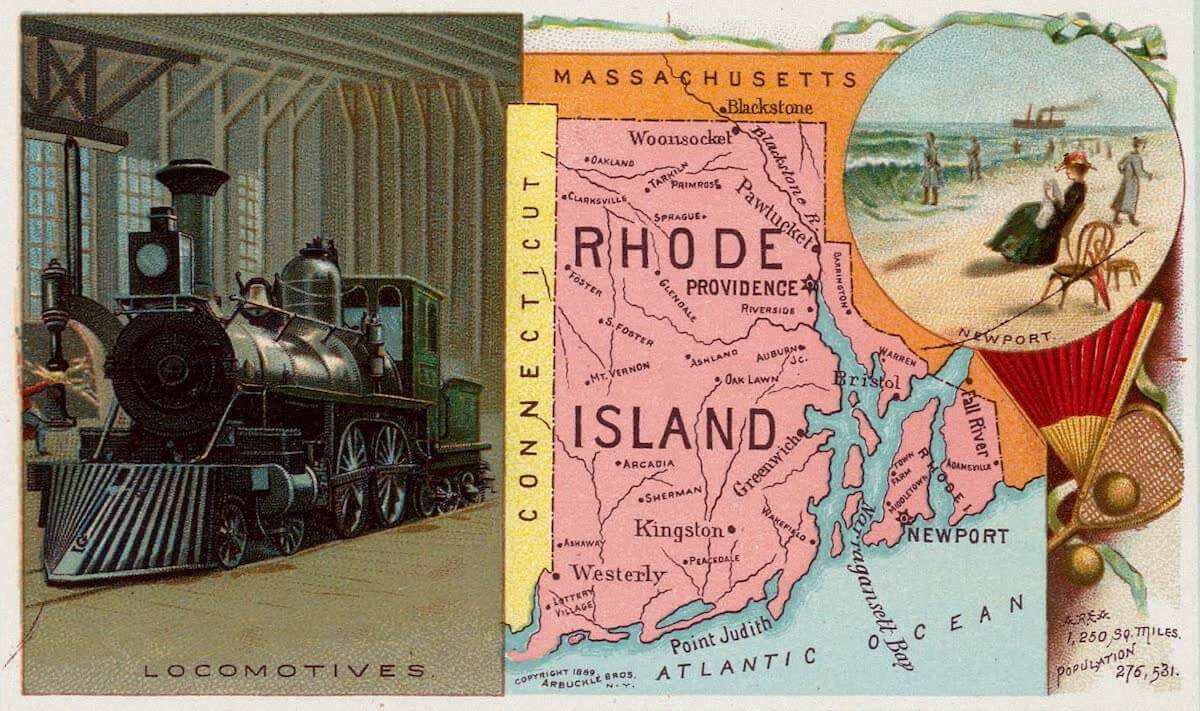 Rhode Island, one of the original thirteen states and the smallest state in area in the American Union. Its greatest length from north to south is between 40 and 50 miles, and its width is less than 40, its land-area being but little over 1,050 square miles. It is bounded on the north and east by Massachusetts, on the south by the Atlantic and on the west by Connecticut.

Rhode Island was settled in 1636 by Roger Williams and his Baptist companions, who were expelled from the Puritan colony in Massachusetts on account, partly, of their religious opinions. It is also believed to have been the Vinland of the Norsemen, who explored its coast in the 10th century. Population 542,610.

The state is divided into five counties, its principal cities being Providence (the capital), Newport, Central Falls, Pawtucket and Woonsocket. Narragansett Bay, which occupies the southeastern quarter of the state, contains a number of beautiful islands, on the largest of which, named Rhode Island, is Newport, a famous summer-resort, formerly one of the two capitals. The country is hilly, and the soil rough and stony, being chiefly devoted to pasturage and orchards. The minerals consist of building-stone, talc, lime and graphite. The principal rivers are the Paw tucket, Blackstone and Pawcatuk In the main they supply waterpower for the numerous factories.

Rhode Island is a manufacturing state, having nearly 300 million dollars invested in various enterprises. The principal lines of industry are cotton, woolen and knit-goods factories. There also are dyeing and finishing establishments; foundry and machine-shop products and rubber and elastic goods are manufactured. Much cheap jewelry is made, and no better solid silverware is manufactured in the United States than in Rhode Island.

The fisheries employ about 2,000 people and have a valuation of one million dollars annually. It was at Pawtucket in 1790 that the first cottonspinning works in the United States were established. Educationally the state does most creditably, expending nearly two million dollars a year. The pupils enrolled number 80,110, and the average daily attendance is 61,487. It has 247 high-school teachers and 6,021 high-school pupils. The state maintains a normal school with 38 teachers and an agricultural school with a faculty of 25. At Providence is Brown University. There are a state sanitarium for consumptives, a state home and school for children, institutions for the deaf and insane, a state work-house, house of correction, a state-prison and many benevolent establishments.

There are no works available for the Rhode Island collection.