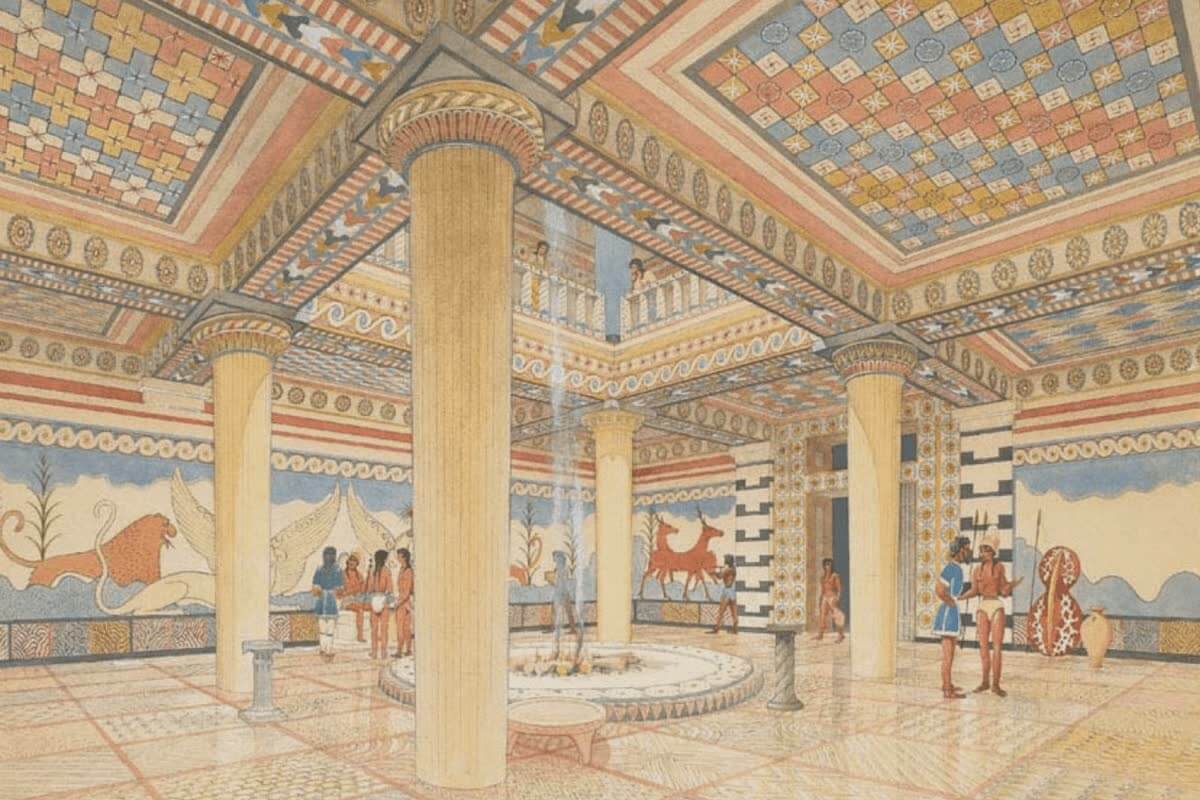 PYLOS (mod. Navarino), in ancient geography a town and bay on the west coast of Messenia, noted chiefly for the part it played in the Peloponnesian War. The bay, roughly semicircular in shape, is protected by the island of Sphacteria (mod. Sphagia), over 2½ m. long from N. to S., and is entered by two channels, that on the S., some 1,400 yds. wide, and that on the N., 220 yds. wide and now almost silted up. To the north lies an extensive shallow basin, called the lagoon of Osman Aga, originally part of the great harbour but now cut off from it by a narrow sandbank.

North of Sphagia is the rocky headland of Pylos or Coryphasium, called in modern times Palaeo-Navarino or Palaeokastro, from the Venetian ruins on its summit. Originally an island, this headland was in classical times, as now, connected by a narrow bar with the lower promontory of Hagios Nikolaos on the north; it is now united to the mainland also by the sandbar already mentioned. Most scholars, ancient and modern, have identified this with the Homeric Pylos, the home of Neleus and Nestor, and a cave on the north slope of Coryphasium is pointed out as that in which Hermes hid the stolen cattle of Apollo. But this view presents considerable difficulties, and Strabo (viii. 348 sqq.) argued that the Pylos of Nestor must be the place of that name in Triphylia.

After the Dorian migration Pylos declined, and it is referred to by Thucydides (iv. 3) as a deserted headland in 425 b.c. In May of that year, the seventh of the Peloponnesian War, the Athenians sent an expedition to Sicily under command of Eurymedon and Sophocles. With them was the general, Demosthenes, who landed at Coryphasium with a body of Athenian troops and hastily fortified it. The Spartans, who were then invading Attica, withdrew their forces and attacked them vigorously by sea. and land, but were repulsed, and the Athenians were enabled by the arrival and victory of their fleet to blockade on the island of Sphacteria a body of 420 Spartiates with their attendant helots.

A truce was concluded, but peace negotiations were defeated by Cleon, who was himself appointed to conduct operations with Demosthenes. A large body of light troops was landed and drove the Spartans from their encampment by a well in the middleof the island to its northern extremity. Their heroic resistance was overcome by a rear attack directed by a Messenian, who led a body of men by a difficult path along the cliffs on the east, and the 292 Spartan survivors laid down their arms 72 days after the beginning of the blockade. Their surrender made a deep impression on the whole Greek world, which had learned to regard a Spartan surrender as inconceivable, and to Sparta their loss was so serious that the Athenians might have concluded the war on very favourable terms had they so wished. Though Pylos should have been ceded to Sparta under the terms of the peace of Nicias (421 b.c.) it was retained by the Athenians until the Spartans recaptured it early in 409 b.c. (Diodorus xiii. 64).

In the middle ages the name Pylos was replaced by that of Avarino (????????) or Navarino, derived from a body of Avars who settled there; the current derivation from the Navarrese Company, who entered Greece in 1381 and built acastle at this spot, cannot now be maintained (Eng. Hist. Review, xx. 307, xxi. 106; Hermathena, xxxi. 430 sqq.). From 1498 to 1821 Navarino was in the hands of the Turks, save at two periods when it was held by the Venetians, who named it Zonklon. In 1821 the Greeks captured the town, situated near the southern extremity of the bay, but in 1825 they had to retire before Ibrahim Pasha. On the 20th of October 1827, however, his fleet of 82 vessels was annihilated in the Bay of Navarino by 26 British, French and Russian ships under Admiral Codrington (see Navarino, the Battle of).

There are no works available for the Pylos collection.