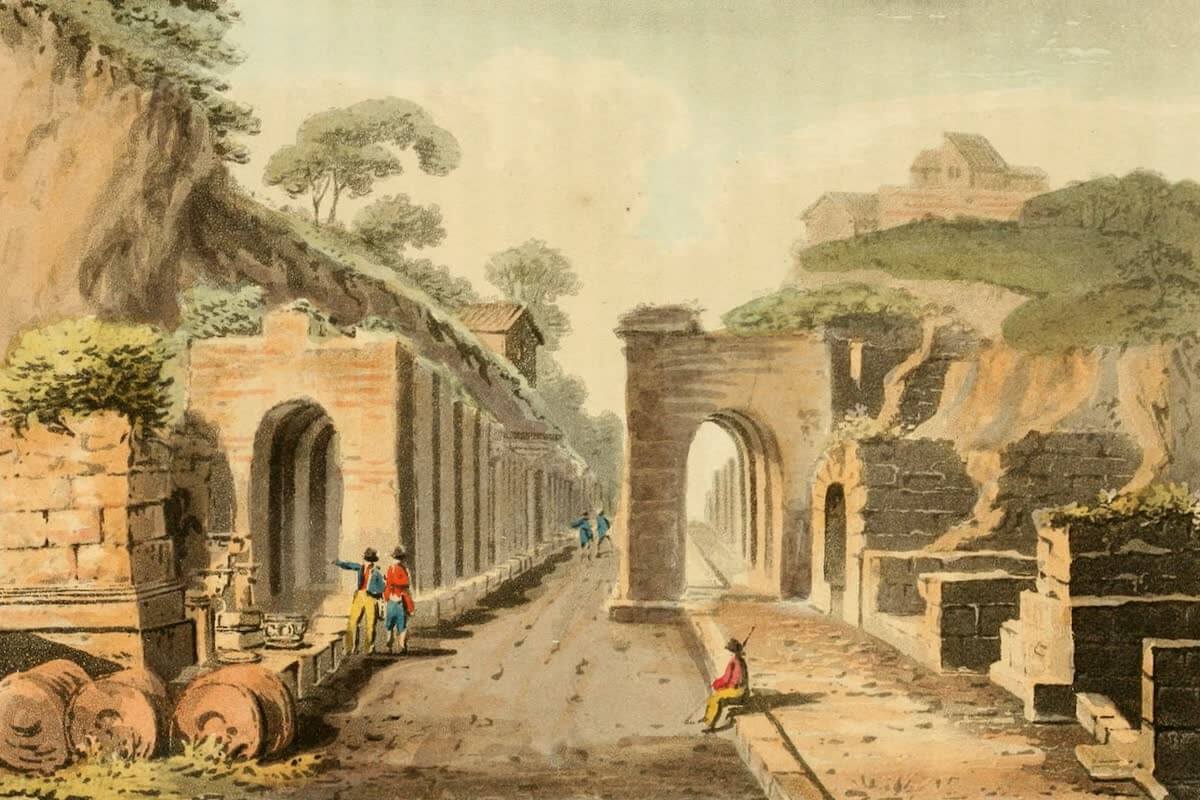 Pompeii, an ancient Italian city, near the mouth of Sarnus River and at the foot of Mt. Vesuvius, 13 miles southeast of Naples. It was founded by the Oscans about 600 B. C., and was afterwards occupied by the Etruscans and Samnites, the latter being dispossessed by the Romans about 100 B. C. From that time until its destruction in 79 A. D. it was a resort, frequented by the Roman aristocracy.

In 63 its magnificent buildings were nearly all leveled to the ground by an earthquake, and some years elapsed before the citizens could be induced to return and rebuild them. Before this work was fully completed, Mt. Vesuvius, whose volcanic fires had been slumbering for unknown ages, burst forth in a violent eruption, which buried Pompeii and Herculaneum under dense beds of cinders and ashes.

Amid the deep gloom that covered land and sea the panic of the citizens was aggravated by repeated shocks of earthquake, and for three days the flight continued, till Pompeii was abandoned by all who could effect their escape. By the fourth day the sun again became dimly visible, and the more courageous of the citizens began to return for such portions of their property as they could rescue from the ruins.

The desolation and distress were so great that Emperor Titus organized relief on a grand scale, and even undertook to clear and rebuild the city. This attempt, however, was soon abandoned; and the unfortunate city remained a heap of hardened earth and ashes until its very site was forgotten, and even the celebrated topographer Cluverius was unable to fix it with certainty.

This difficulty arose in large measure from the fact that the convulsions attending the eruption had turned the Sarnus from its regular course, and so raised the sea-beach that the ruins are nearly a mile from the coast. It was not until 1748 that an accidental discovery revealed that beneath the vineyards and mulberry grounds which covered the site lay the ruins of a city far more accessible, if not more interesting, than the previously discovered Herculaneum. Excavation proceeded fitfully until 1860, when the Italian government commenced unearthing the city in a systematic and scientific manner.

The general plan of the town is very regular, the streets being straight and crossing each other at right angles or nearly so. The streets rarely exceed 20 feet in width, the broadest yet found being less than 30 feet, while the back streets running parallel to the main lines are only about 15 feet. They are usually paved with blocks of lava fitted very closely together, and the marks of horses hoofs and the ruts of chariot wheels are still plainly visible. The houses are generally low, rarely exceeding two stories in height. Not more than 300 skeletons have been discovered, chiefly in cellars and underground apartments. This fact makes it probable that most of the inhabitants escaped. The population probably was 12,000.