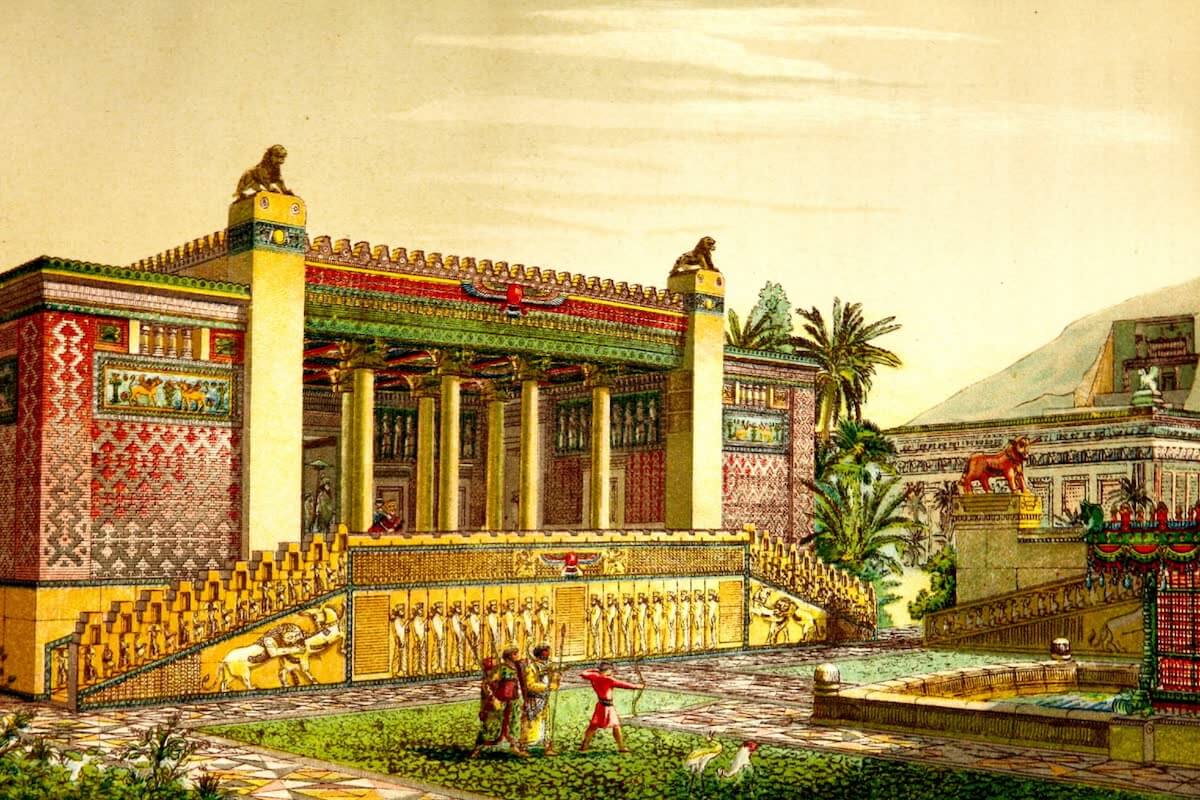 Persepolis was an ancient city of Persia, situated some 40 m. N.E. of Shiraz, not far from where the small river Pulwar flows into the Kur (Kyrus).

The site is marked by a large terrace with its east side leaning on Kuhi Rahmet ("the Mount of Grace"). The other three sides are formed by a retaining wall, varying in height with the slope of the ground from 14 to 41 ft. on the west side a magnificent double stair, of very easy steps, leads to the top.

On this terrace are the ruins of a number of colossal buildings, all constructed of dark-grey marble from the adjacent mountain. The stones were laid without mortar, and many of them are still in situ. Especially striking are the huge pillars, of which a number still stand erect. Several of the buildings were never finished. F. Stolze has shown that in some cases even the mason's rubbish has not been removed. [1]

These ruins, for which the name Kizil minare or Chihil menare ("the forty columns or minarets"), can be traced back to the 13th century, are now known as Takhti Jamshid ("the throne of Jamshid"). That they represent the Persepolis captured and partly destroyed by Alexander the Great has been beyond dispute at least since the time of Pietro della Valle. [2]

Behind Takhti Jamshid are three sepulchers hewn out of the rock in the hillside, the façades, one of which is incomplete, being richly ornamented with reliefs. About 8 m. N.N.E., on the opposite side of the Pulwar, rises a perpendicular wall of rock, in which four similar tombs are cut, at a considerable height from the bottom of the valley. The modern Persians call this place Nakshi Rustam ("the picture of Rustam") from the Sassanian reliefs beneath the opening, which they take to be a representation of the mythical hero Rustam.

That the occupants of these seven tombs were kings might be inferred from the sculptures, and one of those at Nakshi Rustam is expressly declared in its inscription to be the tomb of Darius Hystaspis, concerning whom Ctesias relates that his grave was in the face of a rock, and could only be reached by means of an apparatus of ropes. Ctesias mentions further, with regard to a number of Persians kings, either that their remains were brought "to the Persians," or that they died there. [3]

Now we know that Cyrus was buried at Pasargadae and if there is any truth in the statement that the body of Cambyses was brought home "to the Persians" his burying-place must be sought somewhere beside that of his father. In order to identify the graves of Persepolis we must bear in mind that Ctesias assumes that it was the custom for a king to prepare his own tomb during his lifetime. Hence the kings buried at Nakshi Rustam are probably, besides Darius, Xerxes I., Artaxerxes I. and Darius II. Xerxes II., who reigned for a very short time, could scarcely have obtained so splendid a monument, and still less could the usurper Sogdianus (Secydianus).

The two completed graves behind Takhti Jamshid would then belong to Artaxerxes II. and Artaxerxes III. The unfinished one is perhaps that of Arses, who reigned at the longest two years, or, if not his, then that of Darius III. (Codomannus), who is one of those whose bodies are said to have been brought "to the Persians" [4]. Another small group of ruins in the same style is found at the village of Hājjīābād, on the Pulwar, a good hour's walk above Takhti Jamshid. These formed a single building, which was still intact 900 years ago, and was used as the mosque of the then existing city of Istakhr.

Since Cyrus was buried in Pasargadae, which moreover is mentioned in Ctesias as his own city,[5] and since, to judge from the inscriptions, the buildings of Persepolis commenced with Darius I., it was probably under this king, with whom the sceptre passed to a new branch of the royal house, that Persepolis became the capital [6] of Persia proper. As a residence, however, for the rulers of the empire, a remote place in a difficult alpine region was far from convenient, and the real capitals were Susa, Babylon and Ecbatana. This accounts for the fact that the Greeks were not acquainted with the city until it was taken and plundered by Alexander the Great.

Ctesias must certainly have known of it, and it is possible that he may have named it simply ??????, after the people, as is undoubtedly done by certain writers of a somewhat later date. [7] But whether the city really bore the name of the people and the country is another question. And it is extremely hazardous to assume, with Sir H. Rawlinson and J. Oppert, that the words anā Pārsā, "in this Persia," which occur in an inscription on the gateway built by Xerxes (D. l. 14), signify "in this city of Pārsā," and consequently prove that the name of the city is identical with the name of the country. The form Persepolis (with a play on ??????, destruction) appears first in Cleitarchus, one of the earliest, but unfortunately one of the most imaginative annalists of the exploits of Alexander.

It has been universally admitted that "the palaces" or "the palace" (?? ????????) burned down by Alexander are those now in ruins at Takhti Jamshid. From Stolze's investigations it appears that at least one of these, the castle built by Xerxes, bears evident traces of having been destroyed by fire. The locality described by Diodorus after Cleitarchus corresponds in important particulars with Takhti Jamshid, for example, in being supported by the mountain on the east. [8] There is, however, one formidable difficulty. Diodorus says that the rock at the back of the palace containing the royal sepulchres is so steep that the bodies could be raised to their last resting-place only by mechanical appliances. This is not true of the graves behind Takhti Jamshid, to which, as F. Stolze expressly observes, one can easily ride up; on the other hand, it is strictly true of the graves at Nakshi Rustam.

Stolze accordingly started the theory that the royal castle of Persepolis stood close by Nakshi Rustam, and has sunk in course of time to shapeless heaps of earth, under which the remains may be concealed. The vast ruins, however, of Takhti Jamshid, and the terrace constructed with so much labour, can hardly be anything else than the ruins of palaces; as for temples, the Persians had no such thing, at least in the time of Darius and Xerxes. Moreover, Persian tradition at a very remote period knew of only three architectural wonders in that region, which it attributed to the fabulous queen Humāi (Khumāi)—the grave of Cyrus at Murgab, the building at Hājjīābād, and those on the great terrace. [9] It is safest therefore to identify these last with the royal palaces destroyed by Alexander. Cleitarchus, who can scarcely have visited the place himself, with his usual recklessness of statement, confounded the tombs behind the palaces with those of Nakshi Rustam; indeed he appears to imagine that all the royal sepulchres were at the same place.

In 316 B.C. Persepolis was still the capital of Persis as a province of the great Macedonian Empire (see Diod. xix, 21 seq., 46; probably after Hieronymus of Cardia, who was living about 316). The city must have gradually declined in the course of time; but the ruins of the Achaemenidae remained as a witness to its ancient glory. It is probable that the principal town of the country, or at least of the district, was always in this neighbourhood. About A.D. 200 we find there the city Istakhr (properly Stakhr) as the seat of the local governors. There the foundations of the second great Persian Empire were laid, and Istakhr acquired special importance as the centre of priestly wisdom and orthodoxy. The Sassanian kings have covered the face of the rocks in this neighbourhood, and in part even the Achaemenian ruins, with their sculptures and inscriptions, and must themselves have built largely here, although never on the same scale of magnificence as their ancient predecessors. The Romans knew as little about Istakhr as the Greeks had done about Persepolis—and this in spite of the fact that for four hundred years the Sassanians maintained relations, friendly or hostile, with the empire.

At the time of the Arabian conquest Istakhr offered a desperate resistance, but the city was still a place of considerable importance in the 1st century of Islam (see Caliphate), although its greatness was speedily eclipsed by the new metropolis Shiraz. In the 10th century Istakhr had become an utterly insignificant place, as may be seen from the descriptions of Istakhr, a native (c. 950), and of Mukaddasi (c. 985). During the following centuries Istakhr gradually declines, until, as a city, it ceased to exist. This fruitful region, however, was covered with villages till the frightful devastations of the 18th century; and even now it is, comparatively speaking, well cultivated. The "castle of Istakhr" played a conspicuous part several times during the Mahommedan period as a strong fortress. It was the middlemost and the highest of the three steep crags which rise from the valley of the Kur, at some distance to the west or north-west of Nakshi Rustam. We learn from Oriental writers that one of the Buyid (Buwaihid) sultans in the 10th century of the Flight constructed the great cisterns, which may yet be seen, and have been visited, amongst others, by James Morier and E. Flandin. W. Ouseley points out that this castle was still used in the 16th century, at least as a state prison. But when Pietro della Valle was there in 1621 it was already in ruins.

[1] Cf. J. Chardin, E. Kaempfer, C. Niebuhr and W. Ouseley. Niebuhr's drawings, though good, are, for the purposes of the architectural student, inferior to the great work of C. Texier, and still more to that of E. Flandin and P. Coste. Good sketches, chiefly after Flandin, are given by C. Kossowicz, Inscriptiones palaeo-persicae (St Petersburg, 1872). In addition to these we have the photographic plates in F. Stolze's Persepolis (2 vols., Berlin, 1882).

[3] This statement is not made in Ctesias (or rather in the extracts of Photius) about Darius II., which is probably accidental; in the case of Sogdianus, who as a usurper was not deemed worthy of honourable burial, there is a good reason for the omission.

[5] Cf. also in particular Plutarch, Artax. iii., where Pasargadae is distinctly looked on as the sacred cradle of the dynasty.

[6] The story of Aelian (H. A. i. 59), who makes Cyrus build his royal palace in Persepolis, deserves no attention.