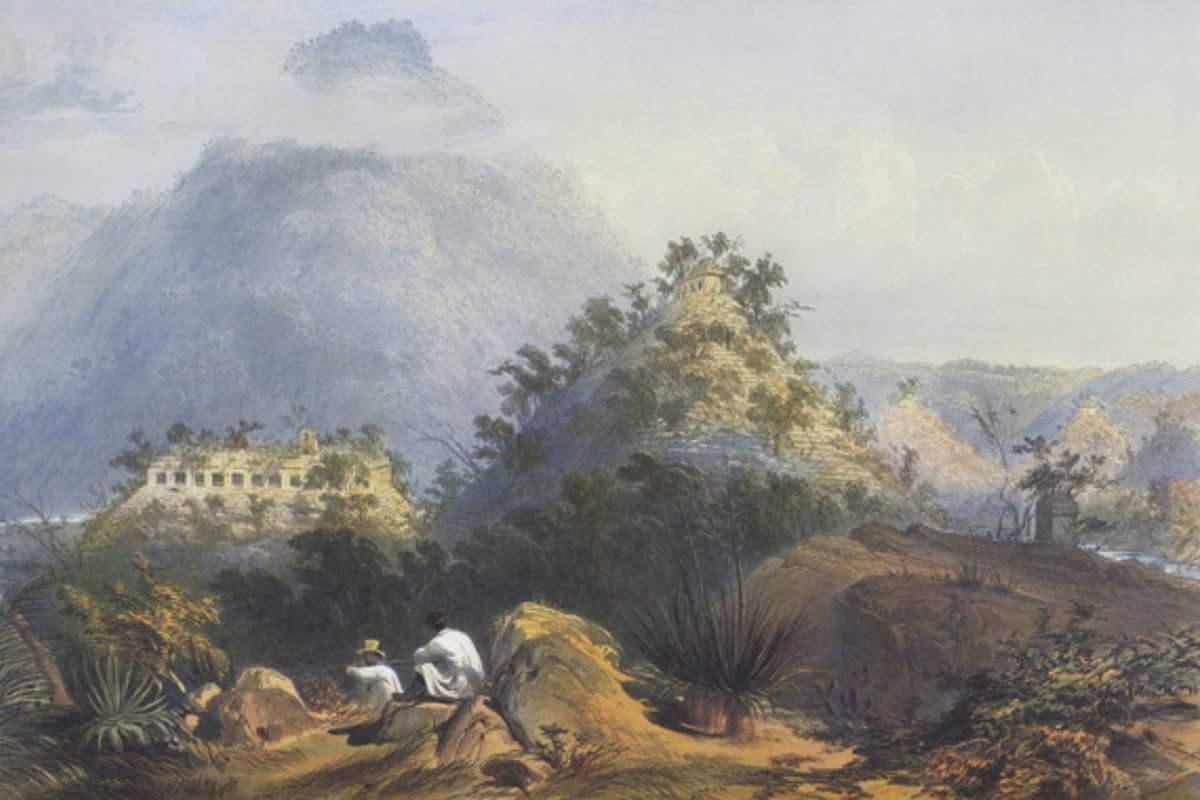 Palenque is the modern name of a deserted city in Mexico, in the narrow valley of the Otolum, in the north part of the state of Chiapas, 80 m. S. of the Gulf port of Carmen. About 30 m. away, on the left bank of the Usumacinta river, stand the ruins of Men-che or Lorillard city. The original name of Palenque has been lost, and its present name is taken from the neighboring village, Santo Domingo del Palenque. Unlike the dead cities of the Yucatan plains, Palenque is surrounded by wooded hills and overgrown by tropical vegetation.

There is less stone carving on the exterior walls, door jambs and pillars of the buildings than on those of the Yucatan Peninsula; this is due to the harder and more uneven character of the limestone. Probably owing to the same cause, there is less cut stone in the walls, the Palenque builders using plaster to obtain smooth surfaces. There is, however, considerable carving on the interior walls, the best specimens being on the tablets, affixed to the walls with plaster. Modeling in stucco was e.extensively used. A few terra-cotta images have been found. Paint and colored washes were liberally used to cover plastered surfaces and for ornamentation, and paints seem to have been used to bind plastered surfaces. The Palenque builders apparently used nothing but stone tools in their work.

The so-called Great Palace consists of a group of detached buildings, apparently ten in number, standing on two platforms of different elevations. Some of the interior structures and the detached one on the lower southern terrace are in a fair state of preservation. The plan of construction shows three parallel walls enclosing two corridors covered with the peculiar pointed arches or vaults characteristic of Palenque. The buildings appear to have been erected at different periods. A square tower rises from a central part of the platform to a height of about 40 ft., divided into a solid masonry base and three stories connected by interior stairways.

The Temple of Inscriptions, one of the largest and best preserved, is distinguished chiefly for its tablets, which contain only hieroglyphics. Sculptured slabs form balustrades to the steps leading up to the temple, and its exterior is ornamented with figures in stucco, the outer faces of the four pillars in front having life-size figures of women with children in their arms.

The small Temple of Beau Relief stands on a narrow ledge of rock against the steep slope of the mountain. Its most important feature is a large stucco bas-relief, occupying a central position on the back wall of the sanctuary. It consists of a single figure, seated on a throne, beautifully modeled both in form, drapery and ornaments, with the face turned to one side and the arms outstretched, and is reproduced by H. H. Bancroft.

The temples on the east side of the Otolum are distinguished by tall narrow vaults, perforated by numerous square openings giving the appearance of coarse lattice work. The Temple of the Sun stands upon a comparatively low pyramidal foundation. The interior consists of the usual pair of vaulted corridors. The sacred tablet on the back wall of the sanctuary is carved in low relief in limestone, and consists of two figures, apparently a priest and his assistant making offerings. There are rows of hieroglyphics on the sides and over the central design.

The Temple of the Cross is a larger structure of similar design and construction. The tablet belonging to this temple has excited controversy, because the design contains a representation of a Latin cross. The Temple of the Cerro, called that of the Cross No. 2, because its tablet is very similar to that just mentioned and stands back against the slope of the mountain, and is in great part a ruin.

There are no works available for the Palenque collection.