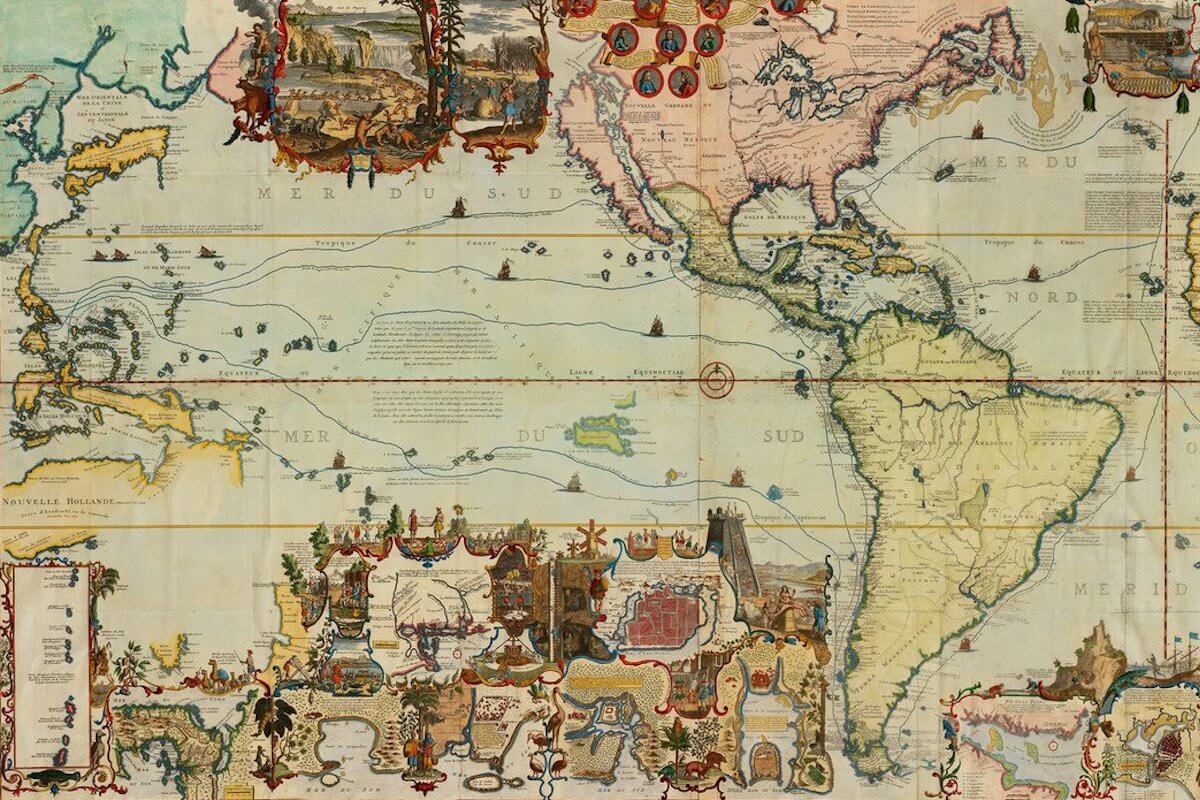 Pacific Ocean or South Sea is the largest of the divisions of the ocean, including about half of the water surface of the globe and covering more than one third of the whole earth. It is 7,000 miles long, and its greatest breadth is 10,000 miles, with an area of 56,000,000 square miles. It is deeper than the Atlantic, averaging about 2,530 fathoms.

There are two trade-winds, blowing almost constantly, one from the northeast and the other from the southeast, on which the surface currents of the ocean depend. Along the equator is a region of calms, and north and south of the trade-winds there are belts of calms. A cold current from the Antarctic Ocean flows along the coasts of South America, and a warm current from the equator flows west, dividing into two branches; one known as the Japan or north equatorial current flows north past Alaska, resembling in its effects the Gulf Stream in the Atlantic; the other turns south and flows along the shores of Australia and New Zealand.

The largest American river flowing into the Pacific is the Yukon, 2,000 miles long, emptying into Bering Sea; besides this are the Fraser, Columbia, Sacramento and Colorado Rivers. The rivers of South America flowing into this ocean are only mountain streams, as the Andes Mountains approach so closely to the coast. The rivers of Asia, however, that flow into the Pacific are among the largest in the world, including the Amur, Hoang-ho, Yang-tse-Kiang, Mekong and Menam.

The coasts of America and Australia bordering on the Pacific are generally mountainous, though the shores of Alaska are low and swampy, and the southern part of South America is broken with bays and islands. The Gulfs of California, Panama and Guayaquil are the most important gulfs of the Pacific on its American coast. The coasts of Asia are low and fertile, with many gulfs, bays and groups of islands. Bering, Okhotsk, Japan, Yellow and China Seas are formed by the peninsulas and islands on the Asiatic coast.

The Pacific is remarkable for its myriad small islands and groups of islands. On the American coast are Vancouver, Queen Charlotte, Prince of Wales and others in British America; Tierra del Fuego, the islands on the coast of Chile and the Aleutian Islands; the islands of Japan, Formosa, Philippine Islands, Borneo, Celebes, Sumatra, Java and New Guinea are Asiatic islands, while in mid-ocean are many groups of volcanic origin. The Hawaiian, Ladrone, Marshall and Gilbert Islands in the North Pacific and the New Hebrides, Society, Fiji and Friendly (or Tonga) Islands are the principal of these island groups.

The Pacific was first seen (1513) by Europeans from a mountain in Panama, by Balboa, a Spaniard. Magellan, making his way through the Strait of Magellan, was the first European to sail it (1520). He named it Pacific, because of its quiet waters. The first English navigator that explored it for any distance was Sir Francis Drake. The northwest passage through the Arctic Ocean into the Pacific was discovered by Sir Robert McClure in 1850, and the northeast passage in 1874 by Nordenskjöld.

There are no works available for the Pacific Ocean collection.