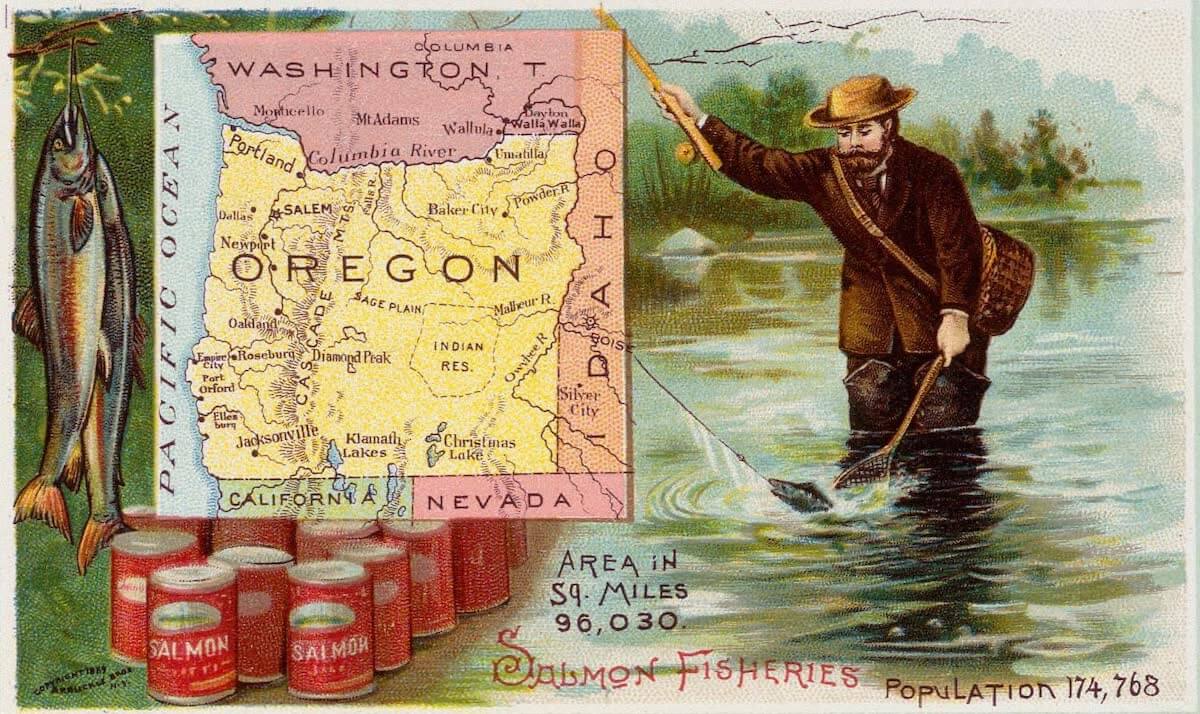 Oregon is in the northwestern part of the United States between the 42nd and 46th parallels of latitude. It is bounded on the north by Washington, on the east by Idaho, on the south by Nevada and California and on the west by the Pacific Ocean. Only six states exceed Oregon in area. It is 285 miles from north to south and 360 from east to west. Population, 672,765.

In 1792 the Columbia was first entered by Captain Gray who gave the river its name. It came into the possession of the United States in 1803. Oregon meant all the northwest country until 1853, when the northern and southern boundaries were fixed. The American Fur Company founded Astoria in 1811. In 1859 the state was created with its present boundaries. The United States claimed this country by reason of Captain Gray's discovery, and the claim was strengthened by the Lewis and Clark exploration in 1805. In 1849 Oregon was organized as a territory. Prominent among early settlers were Nathaniel J. Wyeth, Dr. John McL.aughlin, Dr. Marcus Whitman (1836) and Jason Lee (1834).

Physical Features. Two mountain ranges, the Coast Range and the Cascade, run parallel with the coast. West of the Coast Range lies a comparatively level country, varying in width from 10 to 30 miles. This is cut into many little valleys by divides extending westerly from the mountains. Notable among these valleys are the Nehalem, the Yaquina, the Alsea, the Siuslaw, the Umpqua, the Coos Bay country and Rogue River Valley. East of the Coast Range or between the Coast and Cascade Ranges lies Willamette Valley. This valley is drained by a river of the same name, which rises in a divide that joins the two great ranges about 100 miles from the southern border of the state and flows north to the Columbia.

The valley averages about 50 miles in breadth. Its elevation is low, and the soil is fertile. South of this divide the country is divided by Umpqua and Rogue Rivers, which flow through passes of the Coast Range to the Pacific. All of the country west of the Cascades is known as Western Oregon, all east of it as Eastern Oregon. The elevation of Eastern Oregon varies from 2,000 to 5,000 feet above the sea. The Blue Mountains, about the center of the state, extend in a northeasterly direction into Washington. In Eastern Oregon the rivers flow towards the north. In the southern part are a number of large lakes. Western Oregon is a country of valleys with many streams of water flowing through them. Eastern Oregon is known as a plateau country, its streams are far apart, but frequent enough to make irrigation practicable.

Climate. As the state is divided into two great parts in regard to surface, so it is in regard to climate. Eastern Oregon has hot and dry summers, pleasant autumns, cool, clear weather with occasional showers until December; then cold winters, often with a great deal of snow, cold until late in the spring. Western Oregon has delightfully cool summers, cool nights even after the warmest days, and the winters are never severe. During the winter considerable rain falls, but the total rainfall does not exceed an average of 46 inches a year. Many winters pass without snow, many summers without an electrical storm. Tornadoes and hurricanes are unknown, but heavy rainstorms amounting to cloudbursts are no uncommon thing in Eastern Oregon.

Resources. The resources are just beginning to be developed. For example, in 1902 the annual cut of the lumber mills was about 600,000,000 feet, for 1910 the cut was 2,084,000,000 feet, yet the immense forests which extend from the seashore to the summit of the Coast Range, down the eastern slope and from the lowest foothills on the western coast of the Cascades to the snowline seem scarcely to have been touched by the sawyer. Of the trees comprising these forests, the most important are fir, pine, cedar, hemlock, tamarack, myrtle, ash, maple and laurel. Many important mineral products are found. Gold is mined extensively, the most important mines being in Baker County, Eastern Oregon, and Lane County, Western Oregon. Large fields of sienna are being opened in Western Oregon. Coal, iron and a good quality of building-stone are found in abundant quantities throughout the state.

Agriculture. The three great agricultural products are wheat, hops and dairy products. The largest wheat-farms are in the northern part of Eastern Oregon, the largest dairy-farms are along the coast, and the hop-farms are in Willamette Valley, which also has wheat and dairy farms. Oregon produces two fifths of the entire hop crop of North America. Other important products are oats, barley, flax and hay. Clover, cheat, timothy, vetch and alfalfa are grown. Alfalfa produces three crops annually in the irrigated districts. In the markets of the world Oregon is famed for her fruits, especially for apples, strawberries and prunes. The fruit crop of 1907 brought to Oregon $4,000,000. Of the live stock, cattle, sheep and hogs are raised, though the largest herds of cattle and flocks of sheep are found in Eastern Oregon.

Manufactures. The principal manufactories are woolen-mills, flour-mills, paper-mills, fruit-canneries, fish-canneries, creameries, condensed-milk factories and coffee and spice mills. The dairy product for the year 1907 amounted to $12,000,000. Salmon is the principal fish that is canned here, and the value of the output of the canneries for 1909 amounted to $3,207,000.

Commerce. The largest sea-port is Portland, situated on Willamette River about 12 miles from its mouth. Other ports with food harbors are Astoria, Tillamook, Yaquina, Waldport, Florence, Marshfield, Randon, Port Orford and Gold Beach. The exports comprise lumber, wheat, oats, barley, hay, wool, hops, prunes, apples and strawberries. Portland leads the ports of the world in the export of lumber, and stands first on the Pacific Coast in the exportation of grain. Astoria, the oldest town in the state, has a beautiful harbor, and is situated near the mouth of the Columbia. Its principal industries are fishing, salmon canning and lumbering. The principal inland cities, Oregon City, Salem, Albany, McMinnville Corvallis, Eugene, Roseburg, Ashland, The Dalles, Pendleton, La Grande, Baker City, Prineville and Klamath Falls, are good manufacturing points, and are shipping centers for the products of the surrounding country. The ports of Oregon receive ships from all parts of the world, and her trade with the Orient is increasing each year.

Transportation. The principal railways are those of the Southern Pacific Company; the Oregon Railway and Navigation Company; and the Astoria and Columbia River Railroad Company from Portland to Astoria. The Portland and Seattle Company, a company controlled jointly by the Great Northern and Northern Pacific Companies, are constructing a line down the northern bank of the Columbia and across this river at Vancouver. Each of the first two companies has lines extending into the interior. The Willamette is navigable nearly 200 miles, and the Columbia to Lewiston, Idaho, about 650 miles, though broken by rapids.

Education. The school-district, governed by an elective board of from three to five directors, is the unit of the school system. This board manages the finances of the district, and elects the teachers. The districts of a county have a supervising officer called the county superintendent, while at the head of the system is the state superintendent of public instruction. The funds for the public schools come from the interest on the irreducible school-fund, a county tax and a district tax. The irreducible school-fund brings in about $250,000 annually. The county-tax must be such a sum as will produce at least $7.00 per capita for children of school-age. The district-tax is a special tax on the property of the district by a vote of its taxpayers. The schools have a uniform, state course of study. Eight years are given to the grammar grades and four to the high school.

The course for the high school is planned to give a well-rounded education, in case the pupil is not able to study in a university or college. At the same time it correlates well with the courses offered in the state university and the agricultural college. The University of Oregon is open to all boys and girls who have completed an accredited high school course, and it offers courses in all departments of university work. Oregon Agricultural College offers courses in agriculture, engineering, horticulture and dairying. Besides the public schools, there are a number of private colleges and secondary schools. Notable among these are Albany, Columbia, Dallas, McMinnville and Pacific Colleges and Pacific and Willamette Universities. There are four state normal schools. The text-books for the Oregon schools are chosen by a state commission and are used for a period of six years. A compulsory educational law provides for truant officers who must check over the census and attendance rolls once each month with the teachers, and must see that every child between nine and 14 is in school. Severe penalties for teachers and truant officers are provided for neglect of this duty. The secretary of the state library-commission has charge of the school libraries. Each county must levy a tax for library purposes amounting to 10 cents for each child of school-age. The secretary has charge also of 50 traveling libraries, of which the total number of volumes now amounts to 2,750.