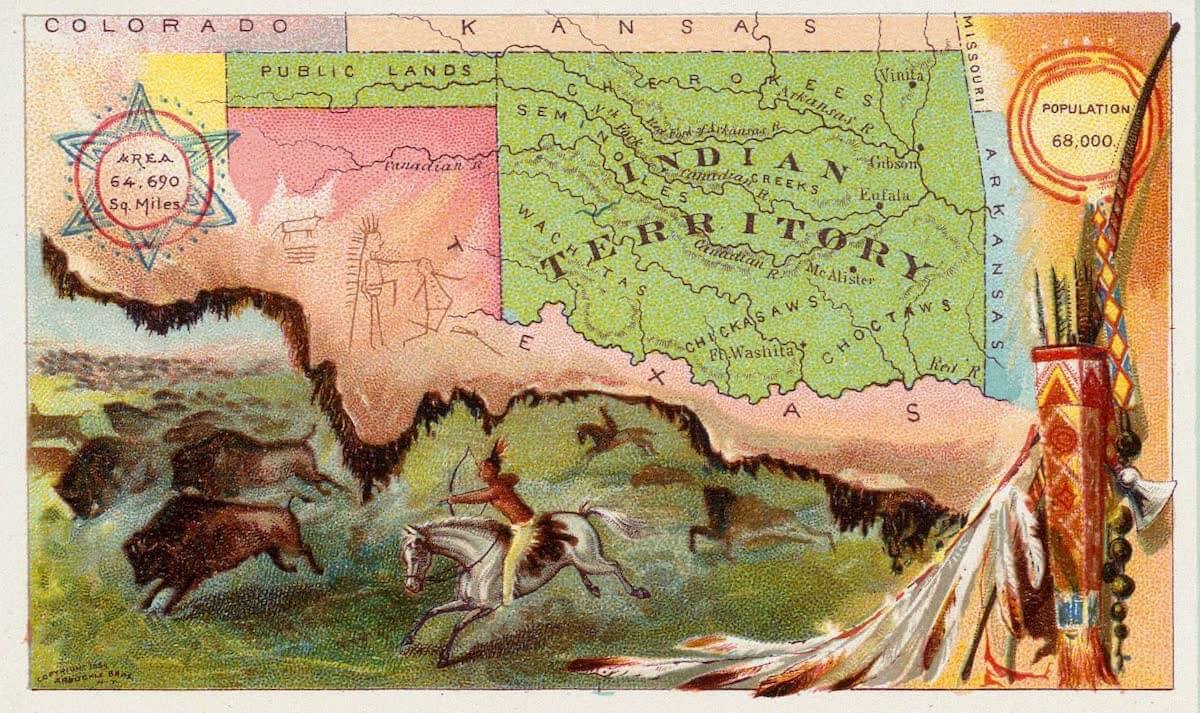 The area of this 46th state is 70,430 square miles, with a population, according to the census of 1910, of 1,657,155. Oklahoma City is the capital, with a population (census 1910) of 64,205. The other important cities are Guthrie, Tulsa, Ardmore, El Reno, Enid, Lawton, Muskogee, Shawnee, South McAlester, Chickasha, Hobart, Stillwater and Vinita. The state, which lies in the South-central group, is bounded on the south by Texas, on the east by Arkansas and Missouri, on the north by Kansas and Colorado and on the west by New Mexico and Texas. The rise of Oklahoma to statehood within so brief a period as 18 years, when it was a vast cattle-range and Indian hunting-ground, is phenomenal, and bodes well for a still greater and more prosperous future.

The entire area came into the possession of the United States with the Louisiana Purchase of 1803. After the first third of the century had passed, most of the region was appropriated by Congress, though unorganized, for the use of the Indians (the chief tribes being the Sacs, Foxes, Creeks, Seminoles, Cherokee, Chickasaw, Choctaws and Cheyennes), while white men were restrained by law from settling upon its lands. As the region, in the development of the far west, was tracked by pioneers and land-boomers, the latter, disregarding its reservation as an Indian country, began to stake out claims and settle upon it.

This the Indians naturally resisted, though unable themselves in the rapid changes passing over the country to adapt themselves to any form of civilized government and control. Matters drifted for a while, the national troops, meantime, being now and then called in to dislodge the “boomers”. Finally, in 1885, negotiations were opened with the Creeks and Seminoles with a view to open unoccupied lands to white settlement, and this was agreed to in 1889, when extraordinary scenes were enacted in the inrush of home-seekers, the incipient city of Oklahoma in one day gaining 5,000 white inhabitants. Transfers of land from Indian Territory and Texas were made about this time, and the region was erected into a territory, the Indians being removed to newly assigned reservations. The progress and development since have been phenomenal. This has justified the recent admission of the two territories as a state, under the name and combined area of Oklahoma.

Surface and Climate. With the exception of the Wichita Mountains in the south and the Chautauqua range near the center of the state, Oklahoma is a vast unbroken prairie plain, about 1,100 feet above the sea, the drainage being chiefly to the southeast by the Arkansas, Canadian and Red Rivers and their feeders. In the east and southeast there is some timber-land, but not much of the growth is merchantable. The soil for the most part and chiefly in the east is fertile, with a rich vegetable mold, the western and northwestern sections, where the rainfall is scant, being of sparse vegetation, and that mainly of sagebrush and cactus. The winter is short and mild, the temperature at normal being near freezing-point, though sometimes falling to 20° below zero, and rising in summer to 80° and even 115°. The average rainfall is 31.8 inches, a condition of climate and soil advantageous to an agricultural and stockraising state.

Natural Resources. It is claimed that the new dual state has not far from 250,000 farms (most of them cultivated by their individual owners), the extent and variety in the production of which are well-nigh a marvel, especially if it be borne in mind how comparatively recent is white settlement. So rich is the soil, so favorable are the normal climatic conditions, that wheat attains a high degree of perfection; while, besides its growth of cereals, including a phenomenal annual corn-crop and all the farm-products found in the other states, it raises cotton, hay, barley, potatoes, all kinds of vegetables, broom-corn, castor-beans, sorghum, peanuts and melons, in addition to a wide variety of fruits, including peaches, grapes, strawberries and many other small fruits. Of late years its annual corn crop has been not far short of 95,000,000 bushels and its wheat crop 25,000,000 bushels.

Stockraising on its great areas of excellent pasturage is another large and profitable industry. The value to-day of its domestic animals, including horses, mules, dairy cows, and other cattle, together with sheep and swine, by last census, is not much below $153,000,000; while the yield of the mineral products approaches $35,000,000. Crude petroleum is produced to the extent of almost 52,029,000 barrels; while natural gas also is among the natural resources, together with large deposits of building-stone of excellent quality, including granite, marble, sandstone and limestone, besides areas, especially in the northeast, known to be rich in coal-seams. Its supply of timber is not large, though in a measure compensated for by its stores of petroleum and natural gas. Other minerals include salt, asphalt, gypsum, tripoli, phosphate, zinc, lead, copper and indications of gold.

Of the oil and coal product a writer in The New York Times recently remarked that “Some of the richest oil-fields in America are in Oklahoma. The Glen Pool oil-district, south of Tulsa, between Red Fork and Mounds, has between 450 and 500 producing oil-wells, with a total capacity of 100,000 barrels a day. The first was sunk in December, 1905. Pipe-lines have been constructed for the transportation of this oil to the Texas seaboard and to the refineries at Whiting, Ind. More than $10,000,000 has been invested in tanks, pumping-stations and pump lines in Tulsa County. Eastern Oklahoma, which is not so uniformly even as the western portion of the state, produces more than 3,000,000 tons of coal a year, for which its mines receive about $6,000,000. The coal-field extends from the vicinity of Tulsa on the north to the Texas line on the south, and is more than 100 miles broad. The state contains about 150 coal-mines, employing about 10,000 operators.”

Commerce and Transportation. The commerce of the chief towns is assuming large and rapidly increasing proportions. The freight into and out of Oklahoma City in 1912 amounted to about $4,890,000, while the value of the buildings erected that year was $885,246. The assessed taxable property of the state (1910) was $860,000,000; while its railway mileage is nearly 6,000 miles. The chief lines traversing the state embrace the Chicago, Rock Island and Pacific; Atchison, Topeka and Santa Fé; Missouri, Kansas and Texas; Missouri Pacific; Kansas City Southern; and Texarkana and Fort Smith roads. It has 20 railroads in all. The receipts and expenditures of the state are about $6,000,000 annually. It has 276 national banks, with an aggregate capital of about $13,000,000 and individual deposits amounting to nearly $52,000,000. The state banks (some 631 in number) have an aggregate capital of $9,666,000 and total deposits amounting to close upon $38,000,000.

Education. The school population in 1911 numbered about 557,000; some 400,000 were enrolled, while the average daily attendance was in the neighborhood of 260,000, the teachers numbering about 10,000, two thirds of them being women. The school expenditure in the year named was close upon $6,760,000; the state has a large invested fund for educational purposes, including the training of teachers, undertaken at normal schools and institutes in several localities. Higher education is represented by the University of Oklahoma at Norman, with 36 instructors and 600 students; the university's tuition is free to local residents; it also has a preparatory department, a college of arts and sciences, including (in addition to the ordinary collegiate subjects) courses in medicine and engineering; it also has a school of pharmacy and one of fine arts. Among other higher educational institutions are an Agricultural and Mechanical College at Stillwater, an Agricultural and Normal University for colored students at Langton, Kingfisher College (Congregational) and the Indian School (United States) at Chilocco. The state makes the usual provision for charitable and correctional institutions as well as for mental defectives and for criminals.

There are no works available for the Oklahoma collection.