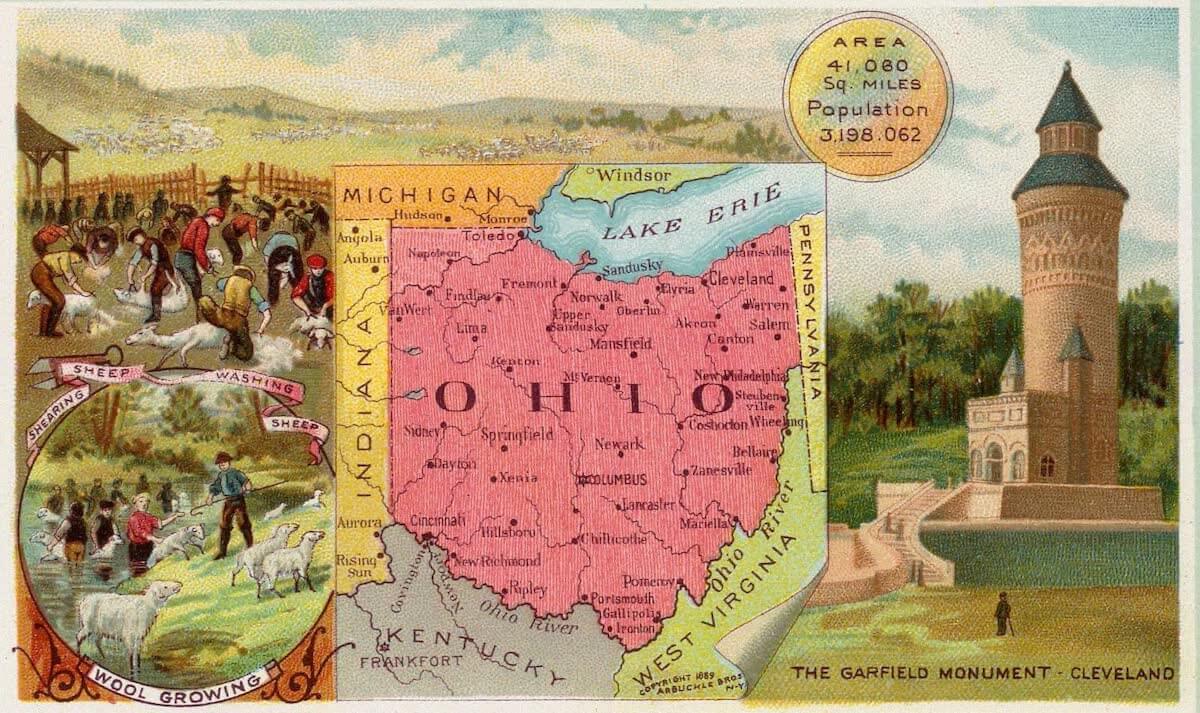 Ohio took for its own the name of the river, called by the French explorers “The Beautiful,” and by the Indians, some combination of vowels and consonants which by use was worn and softened into Ohio. The state extends through about three and a half degrees of latitude and about four and a quarter degrees of longitude, the lessening length of the latter leaving the state nearly square—a shield in shape—with an area of something near 40,000 square miles. It lies between Michigan and Lake Erie on the north, Pennsylvania and West Virginia on the east, West Virginia and Kentucky on the south and Indiana on the west. Population 4,767,121.

Politically speaking, the greatest event pertaining to this region was the Ordinance of 1787, passed by the Continental Congress in its last days. One provision of the ordinance is regarded as a fitting quotation in discourse of whatever sort about Ohio: “Religion, morality and knowledge being necessary to good government and the happiness of mankind, schools and the means of education shall be forever encouraged”. This lofty declaration was retained in the constitutions of 1802 and 1851. The political history of the northwest begins with the settlement — 1788 — at the mouth of the Muskingum.

In 1800 the great northwest was divided into two unequal parts, the Eastern Division, as it was named, being, territorially, what now is Ohio, with a wedge-shaped piece of southwestern Indiana and that portion of the peninsula to the north which lies east of the meridian passing through the mouth of the Greater Miami. Among the formative events of Ohio history the following are written in italics:

(1) the bold march of George Rogers Clark with a commission from Virginia;

(2) the obstinate refusal of Maryland to enter the Union until her sister colonies, owning or claiming territory beyond the Ohio, should cede it for the general good to the Federal government, and the consequent cession of those lands;

(3) the ordinance of 1787 providing for not less than three or more than five states;

(4) the founding of Marietta and the setting up of a territorial government;

(5) the battle of Fallen Timbers, with the Greenville treaty — 1795 — as its first fruit, its open door to homeseekers;

(6) the division — 1800 — of the vast extent north of the Ohio and east of the Mississippi into the Eastern Section of the Northwest Territory and the Indiana Territory;

(7) the act of Congress enabling the people of the former division to form a constitution and a state government;

(8) the deed whereby it changed from a territory to a state, though which of three deeds did it is a question which, like Banquo's subliminal self, refuses to down and stay.

The most recent critical discussion as to the date of Ohio's admission to the Union writes it March 1, 1803. Consult Ohio in the American Commonwealths Series and Short's Ohio.

Surface. Along the Ohio, whose low-water line on the right shore forms part of the eastern and all of the southern boundary, the surface is hilly, and here and there the scenery is extremely beautiful. West and north it is rolling, in places nearly level, though a general rise allows a point in Logan County, west of the central meridian, the honor of being the highest. The state is drained by a goodly number of streams which wind through fertile valleys on their way to the Ohio or to Lake Erie. The valleys of the south-flowing rivers, outside of the glacial area, are bordered by drift-terraces upon which are mounds, once the sites of Indian villages. Of the streams flowing to the lake, some find or have created excellent harbors at their mouths, as the Maumee and Sandusky, in bays of the same name.

Climate. The rise and fall of the mercury indicate a climate of extremes, and February and June this year are not copies of those months last year, and give no ground for a guess what they will be like next year. It was said by one of old time, whose humor leaned to truth's side, that: “Ohio has no climate but in its stead a great variety of weather samples.” The rainfall by the year is usually sufficient, though “very wet” and “very dry” are sometimes not many miles apart. Some of the rivers, notably the Ohio, are subject to floods, which write their history in the desolation they leave behind them.

Natural Resources. The chief gifts that nature offers are coal, sandstone, limestone, iron ore, petroleum, gas, gypsum, the forests, fish in the creeks, rivers and lakes and various kinds of clay. In the east and southeast the carboniferous area underlies some 10,000 square miles. Here “coal-banks” are numerous, the farmer fills his own coal-house, and the smaller towns are supplied by men who haul coal “for a living.” Near Ohio River are vast mines, and a daily sight along the Baltimore and Ohio Railway and contributing roads, especially the Hocking Valley, is the long trains of immense cars loaded with coal and coke and drawn by monster engines which make the earth tremble as they thunder along. Most of the sandstone, including the brownstone much used in the east for house-fronts, is quarried in a tract whose western end is in Ohio. A beautiful stone of many warm colors, — red, yellow, brown, black, — is quarried near Mansfield. A church at Napoleon and a public library in Defiance at the junction of Maumee and Auglaize Rivers are examples of what can be made of this stone. The clay known as kaolin is used in giving weight to paper and a good printing-surface, but chiefly in the manufacture of chinaware. One of the two largest potteries in the United States is at East Liverpool, O. When the writer was a boy, his father brought home a bottle of “rock oil.” It was said to be a good medicine when applied to a horse's legs. Of this crude petroleum, in 1910, the production in the United States was 209,000,000 barrels, Ohio being fifth among the states in its production and seventh in value of its refinery output. Many Ohio cities are now supplied with natural gas from Ohio wells or piped from West Virginia and Indiana.

Manufactures. Among the earliest industries developed in this country was that founded upon the finding of iron-ore in the valley of the Hocking. At first the readily made charcoal was used for smelting. After a time a quality of coal was discovered in the northeastern part of the state which seemed the thing for which the ore was waiting to change to iron. Immense quantities of Lake Superior ore are smelted to-day in the smelting districts of Ohio — notably in Mahoning Valley. It will assist in forming a conception of the multiplicity and the variety of Ohio's manufacturing interests to glance over a small fraction of the products put upon the market by the 1,100 companies incorporated in the year ending November 16, 1906; the total capital stock quoted at $65,000,000: soaps, cheese, medicines, cigars, liquors, ice, wire-nails, sugar, farming implements, pianos, sanitary closets, condensed milk, boots, shoes, chemicals, bread, paints, jewelry, cement, fertilizers, automobiles, wire-fence, telephone apparatus, boilers, tile, and hundreds of others. Of 800 miscellaneous companies the capital stock is over $30,000,000. But all these and their like are simply supplementary to the great factories, foundries and rolling mills along the rivers or on the lakes — as the immense mill at Lorain, one of the largest in the world — and at various advantageous sites in many of the cities.

Transportation. In 1825 the legislature adopted a report of which the final result was the Ohio Canal and the lower division of the Miami and Erie Canal. The news was greeted by the usual noisy expressions of popular joy. These works were completed in 1833, and the entire canal system in 1842. The cost was almost $15,000,000. Their effect upon the growth and prosperity of the state was wonderful. The markets of the river, the lakes and the great city on the Hudson were opened to the Buckeye farmers. The northern and western parts of the state were brought nearer the east. The value of lands as well as of products was greatly enhanced. It is not necessary to name the many great lines of railroad that now pass through Ohio, east and west, north and south. Summing the miles of main track gives a total of 8,560; their second track, 1,436 miles. The grand total of value is $138,669,294, while the total value of the urban and interurban lines is $10,140,096.

Education. The early schools were not free schools supported by the public. The idea of such schools was of slow growth. An attempt to establish free schools and support them by a tax of one mill on the dollar, made in 1826, shows that the seed was planted, but the feeble efforts left scarcely a trace. The Akron law of 1846 and its extension throughout the state were long, firmly-planted steps forward. The high school, the superintendent, the county teachers' institute, manual training, state normal schools and a state commissioner of schools are other strides in the same direction. The commissioner's report for 1911 gives the number of school-houses erected within the year as 238; the township districts 114; separate districts 124; at a cost: township, $475,795; separate, $4,673,267; elementary school-houses as 10,071 and the high-school houses as 174; their value as $75,084,867; and their teachers as 28,032. The children's homes not only are humane institutions but, commonly, they are schools. There are 53 of these, caring in 1906 for 2,079 youth. The range of “expanse per capita”, from $9.12 to $237.45, plucks credulity by the nose. Some of these have farms and perhaps do not charge up their consumed products as expense. The following state institutions are educational in every sense: the school of the Sailors' and Soldiers' Orphans' Home; the School for the Blind; the Institution for the Education of the Deaf and Dumb — the fifth founded in the United States; the Institution for the Education of Imbecile Youth; the Boys' Industrial School; the Girls' Industrial Home — these for youth in need of “reforming”; and the Reformatory, at first named, and in reality still, the Intermediate Penitentiary. They are well-conducted as a rule, despite the fact that partisanship early assumed sway. The tendency is toward a cure of the evil.

The Teachers' Reading Circle movement began in 1882 in Ohio, and has spread into many states. Its purpose is to make the habit of reading pedagogy, literature, history and nature universal among teachers. The members number over 10,000. There also is a Pupils' Reading Circle. It is rapidly growing in numbers.