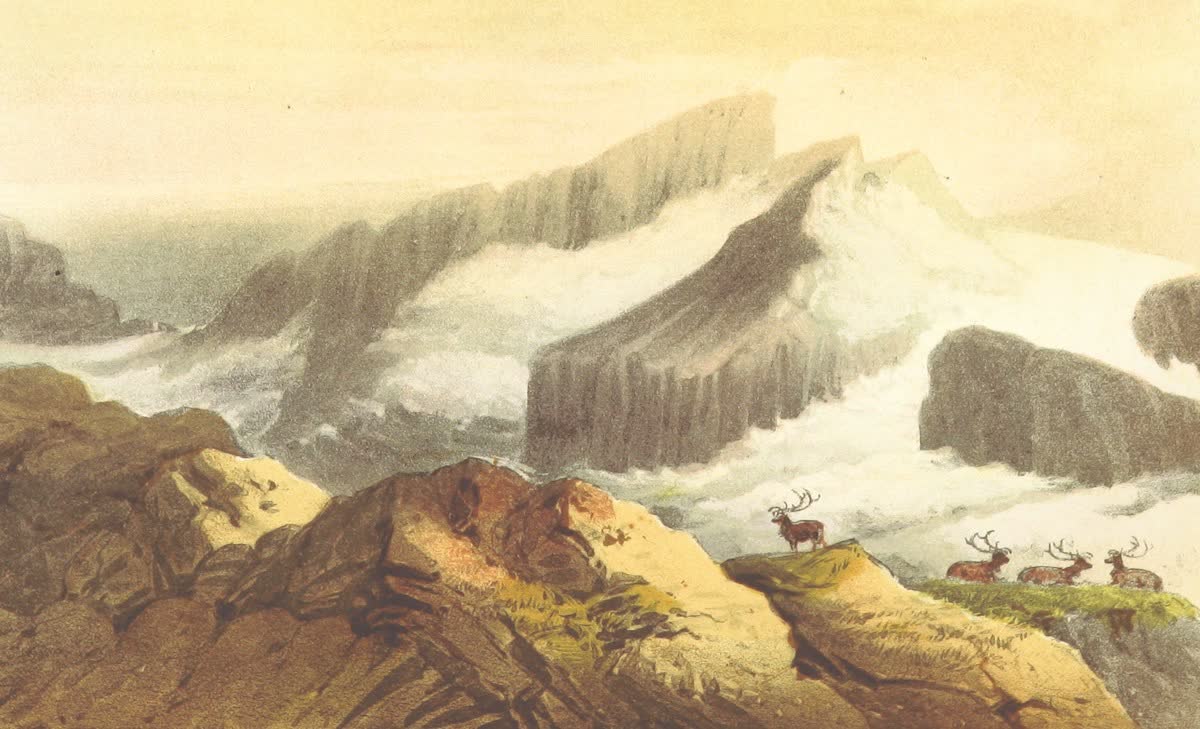 Norway, the western and northernmost part of the Scandinavian peninsula, before November of 1905 united to Sweden only through having a common ruler; it is divided from Sweden by Keel Mountains, which run parallel to the coast from the north to 63° and then separate, the main division continuing to mark the boundary by a plateau from 2,000 to 4,000 feet wide. The higher peaks are Galdhopiggen, Glittertind, 8,379 feet; Snæhaetten, 7,566; and Lodalskaupen, 6,790.

Bear, lynx and deer abound in these mountains, and the only inhabitants are the men and women who tend the large herds of cattle and sheep. On account of the Gulf Stream the winter on the coast is much warmer than in the interior, whereas the summer is much cooler. The largest cities are Kristiania, the capital (population 227,626); Bergen, Trondhjem, Stavanger, Drammen, Kristiansand and Fredrikstad. The hardiest grains and vegetables flourish, but the occupation of the people is mainly connected with the great fisheries.

The mineral wealth has been practically exhausted since 1870, only a few mines being worked. Norway is divided into 20 districts, has an area of 124,130 square miles, and a population of over 2,391,782. It nominally is a limited monarchy, but actually, to all intents and purposes, almost is a free republic. The head of the government is a king, Haakon VII, but his acts are limited by an appointed executive council of nine and one minister of state.

The religion is Lutheranism, which still is the state-church of Norway. Non-Lutherans number only 53,000. One of the first peoples to settle Europe, their history does not, however, become free from myth until the 9th century, when the Lapps and Finns were found in the country by the Gothic descendants who then crossed the Baltic and settled there. For a long time it was a part of the kingdom of Denmark. Her history is intimately associated with that of the Norsemen, who were a part of her people, but from 1130 to 1240 the country suffered both in war and in commerce, and commenced a rapid retrograde movement which did not end until it was attached to Sweden in 1814.

All titles of nobility were abolished in 1821, and in the struggle from 1872 to 1884 the right of veto was taken from the king. Then came a constitutional struggle of Norway against Sweden, Norway demanding consuls of her own and greater independence in her foreign policy. On June 7, 1905, the Norwegian legislature dissolved the union with Sweden, and on Oct. 16 the Swedish parliament ratified a treaty recognizing Norway’s independence. In November Prince Karl of Denmark was called to the throne, and became king under the title of Haakon VII.