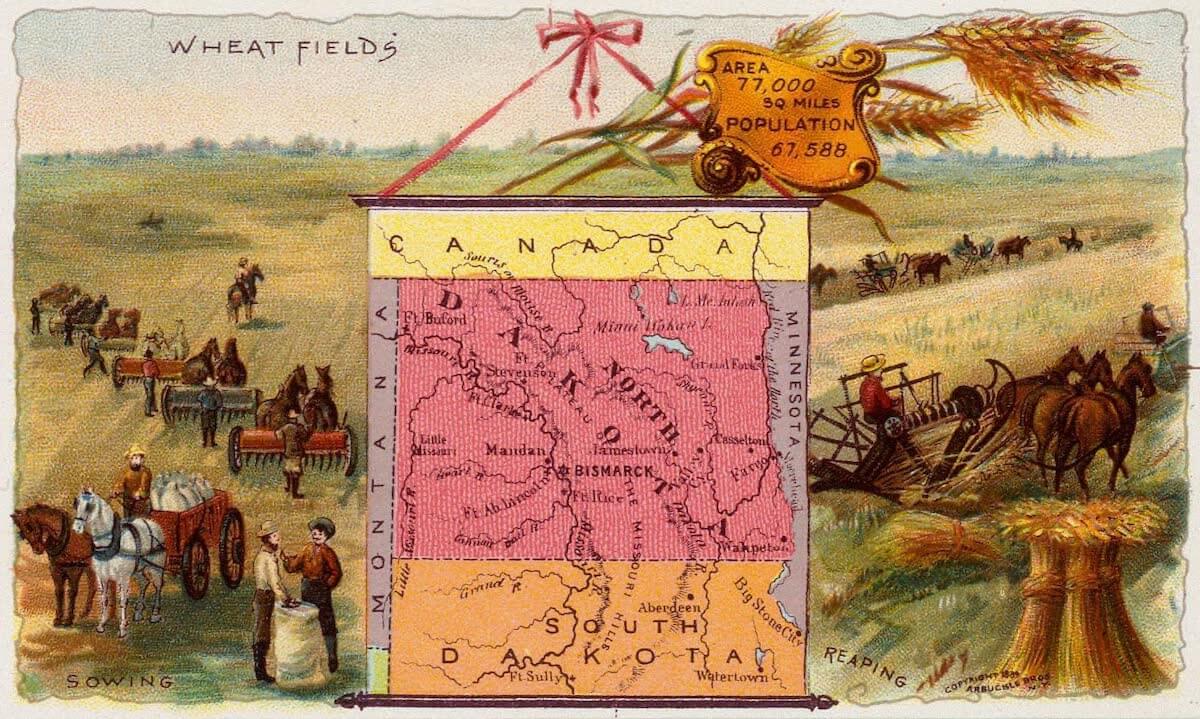 North Dakota. A northwestern state of the Union, originally part of the Louisiana purchase and admitted in 1889. It is bounded on the north by Manitoba and Saskatchewan; on the south by South Dakota; on the east by the Red River of the North, which in part separates it from Minnesota and by Minnesota; and on the west by Montana. Its area is 70,795 square miles, its length being 210 and its breadth 360 miles.

The Dakotas were in the Louisiana purchase of 1803, and from that era to 1812 formed a part of Louisiana Territory, subsequently renamed Missouri Territory. In 1810 French Canadians from the Canadian Red River settlement built a fort at Pembina, which Lord Leekirk, the Canadian governor, claimed mistakenly as a British stronghold. Early in the century the region was explored from Mandan by the Lewis and Clark expedition, and in 1839 a considerable part of the country was explored by Frémont.

In 1849 North Dakota east of the Missouri became part of Minnesota for a time, and the area west of the river was made a part of Nebraska Territory. In 1851 to the Federal government was ceded part of the lands held by the Sioux Indians, and these lands were thrown open for settlement. In 1861 Dakota Territory was created, part of Montana and part of Wyoming being included in it; while two years later, on the creation of Idaho Territory, the Dakotas assumed almost their present area, and in 1889 they were separated, forming North Dakota and South Dakota. After their erection into separate statehood, each was given a constitution, a convention which met at Bismarck in 1889 agreed upon a constitution, and in November the state was formally admitted into the Union.

Surface and Climate. North Dakota in considerable part has a fertile belt of producing land, especially in the northeast of the Red River tract, where the soil is a rich, black loam, with a deep alluvial deposit, once covered by ancient Lake Agassiz. In the north-central part are Turtle Mountains, which extend southward from Manitoba over a considerable area of the state; portions of this region are covered with timber, while southeast of the mountains is Devil’s Lake, whose area of salt water, without outlet, is about 40 miles in length and from 6 to 8 in average breadth. Elsewhere the characteristics are those of the treeless prairie with various grasses and forage plants, and underlying this in the northwestern region are tracts of lignite, clay, lime, salt, building-stone and occasional traces of iron. The climate is a dry and bracing one, with temperature varying between 20° to 40° below zero in the winter months and 110° to 114° in summer. For the most part the rainfall is sufficient for farming, though light in the west and northeast.

Manufactures. The industries are of minor importance, and what there are represent, in the main, flour and grist mill products, with the kindred industries of butter, cheese and condensed milk. The value of the total manufacturers in 1909 was but $19,138,000. Printing and publishing are growing trades and in 1909 yielded a gross value of $1,910,000. Fargo is the chief center of manufacturing.

Education. In 1910 the school expenditure was close upon $5,000,000, derived from local taxes, the permanent school-fund and the sale or rental of school-lands. In 1909–10 the number of enrolled pupils was 139,802, while the average daily attendance was but 90,149; the number of teachers was 7,387, the average monthly salary of which was for men $62.78 and for women $50.49. In 1910 there were 137 high schools, with a total attendance of 5,473. There are a state agricultural college at Fargo and normal schools at Mayville and Valley City. Higher education is represented by the University of North Dakota, near Grand Forks, with 51 instructors and 807 students; Fargo College (Congregational), with 19 instructors and 244 students; and by Red River Valley University (Methodist Episcopal), at Wahpeton.

There are no works available for the North Dakota collection.