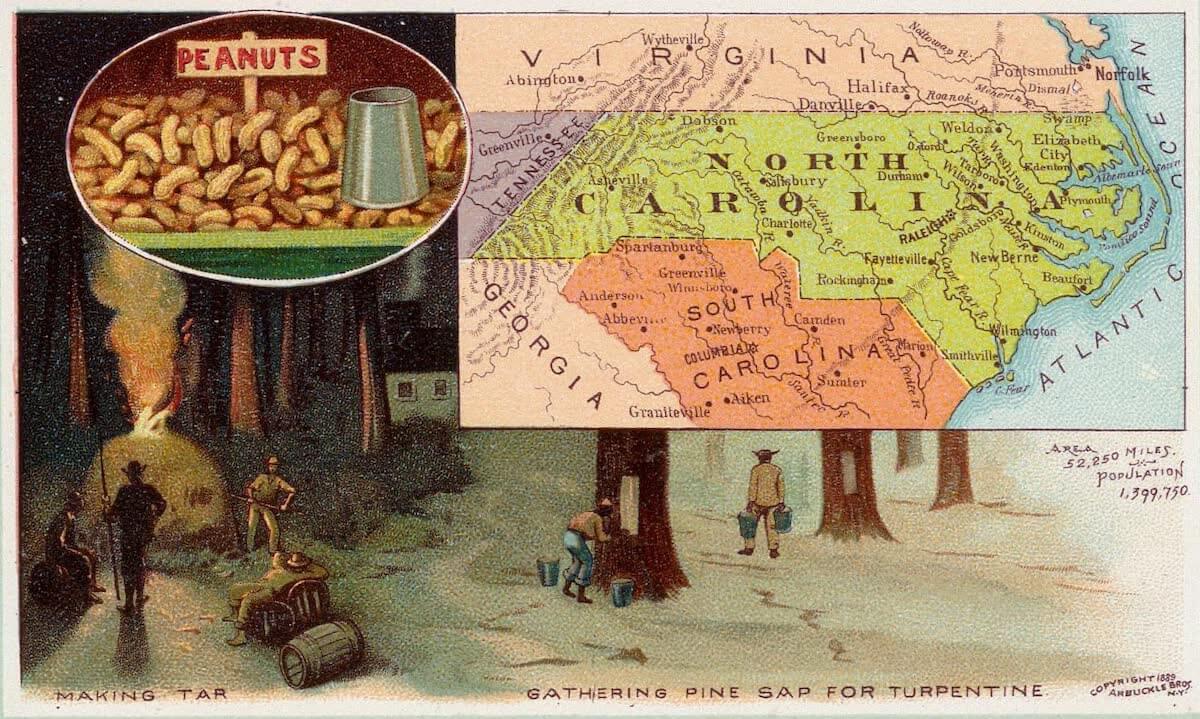 North Carolina, one of the original 13 states of the United States, lies on the Atlantic seaboard, directly below Virginia, and has an area of 52,250 square miles, that is, 7,000 square miles larger than Pennsylvania. Sir Walter Raleigh first placed colonies in the state in 1585–86–87, but none became permanent. In 1629 it was given to Sir Robert Heath by Charles I, and in 1653 some Virginia colonists settled on the banks of the Roanoke and Chowan Rivers.

Later large numbers of emigrants from Scotland and the north of Ireland and a company of Moravians settled in the colony. It became a royal province in 1729, and so remained until May 20, 1775, when it declared its independence, the Mecklenberg Declaration of Independence being passed in convention at Charlotte on the date named. It was the 12th state to ratify the constitution. It was the last of the 11 states to secede from the Union in 1861, but earnestly supported the Confederacy, furnishing soldiers to the Confederate army in excess of the voting population of the state. North Carolina has advanced greatly in recent years, in trade and manufacturing industries. Population 2,206,287.

Drainage and Surface. The eastern part of the state is low and often marshy, rising gradually to the North Carolina mountains in the west, with Mount Mitchell (6,688 feet) for their highest point. The principal ranges traversing the state are the Blue Ridge, the Great Smoky Range, the Black and the Balsam Mountains. Albemarle and Pamlico are the two important sounds, and of the lakes Mattamuskeet is the largest, having an area of 100 square miles. Drainage follows the general slope of the land toward the southeast, and the principal rivers are the Catawba, Yadkin, Roanoke, Neuse, Tar and Chowan.

Natural Resources. North Carolina is rich in minerals; gold, silver, lead, zinc, copper, plumbago, corundum and mica are widely distributed. Most important, however, are the immense deposits of iron and coal. Phosphate rock is found in great abundance, white and gray granite and sandstone quarries are quite numerous, while marble and tin are also found. From the extensive forests of long-leaved pine, large quantities of tar, resin and turpentine are shipped every year. Other varieties of trees are walnut, holly, birch, ash, cedar, maple, hickory, magnolia and many others. The river and coast fisheries represent an annual source of income to several thousand people. The government hatchery for shad and herring is at Edenton, and for rock bass and salmon at Weldon. The oyster and shell fish industry is of great value, oysters of a fine quality and much prized coming from New River.

Agriculture. Agriculture also is an important interest, large crops of corn, cottons wheat, rice, oats, hay, flax, buckwheat, tobacco and sweet potatoes being produced. In the production of tobacco North Carolina is second only to Kentucky. Truck-farming has become quite important of recent years, as are also the cultivation of the grape and the raising of stock.

Industries. While the rivers of North Carolina are non-navigable because of their fall at the old shore-line of the ocean, they have been turned into streams of vast power through the same agency. The state has water-power unsurpassed and scarcely equalled in any other. It leads the southern states in the manufacture of cotton goods and extensively manufactures tobacco, cigars and lumber products. Among her other industries are flour and grist milling, the tanning and curing of leather, the making of machinery, liquors, utensils and fertilizers.

Education. A public school fund was provided in North Carolina in 1825, and in 1840 her public-school system was established. The state appropriations are aided by local taxation in the larger towns. There is an equal distribution of educational funds between the races, and an annual provision is made for normal institutes for both colored and white teachers. The higher state educational institutions are the state university established at Chapel Hill in 1789, the state agricultural and mechanical college at Raleigh, and a state college for women at Greensboro. There are many sectarian colleges, several women’s colleges and three colleges for colored people. The state library is at Raleigh, the university and the various colleges have their libraries, public libraries are in many cities, and there is a state appropriation for libraries in the rural districts.

There are no works available for the North Carolina collection.