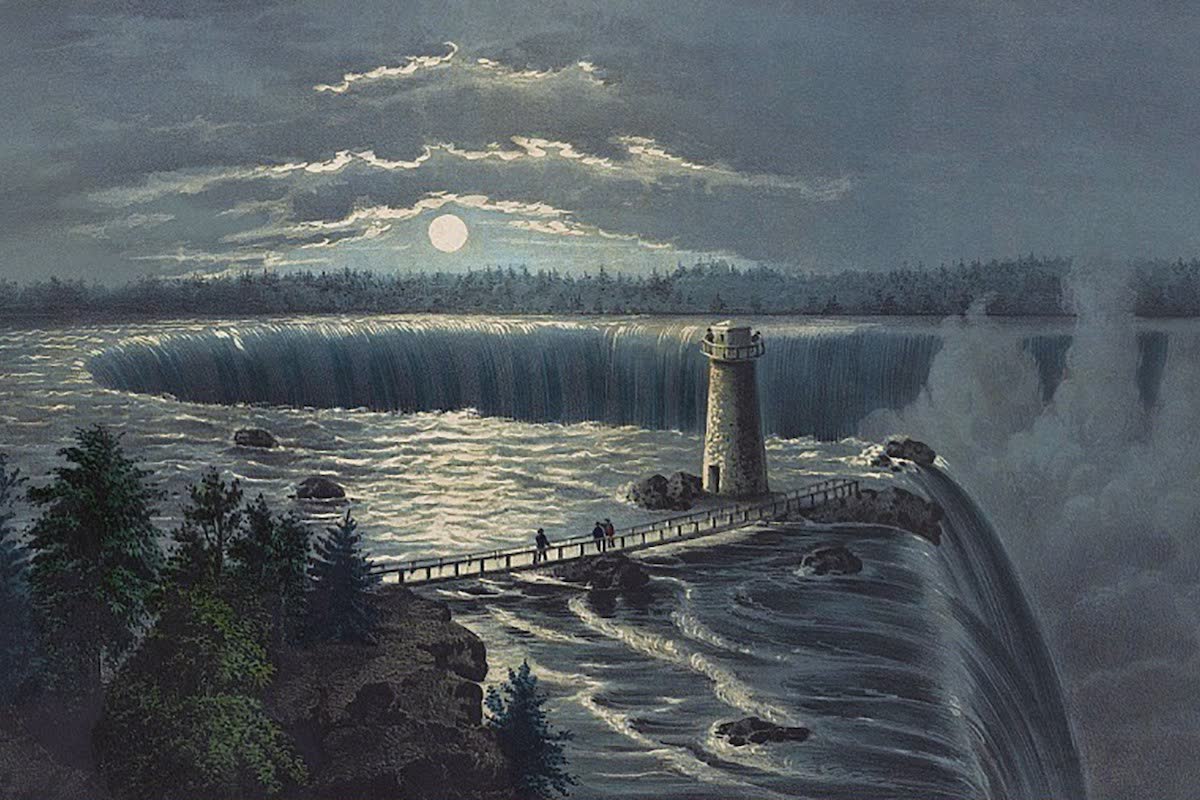 NIAGARA FALLS. The Niagara river, which flows from Lake Erie N. into Lake Ontario, is about 36 miles in length; its descent from the level of one lake to that of the other is about 334 feet. At the foot of Grand Island, which reaches within 1½ miles of the Falls, the river is contracted to a width of 2½ miles, and grows narrower as it proceeds.

By this, and by the descent in the channel, which is about 60 feet in the mile, are produced the swift currents known as the rapids, in which the river, notwithstanding its great depth, is perpetually white with foam. At the Falls, which are 22 miles from Lake Erie, the river is divided by an island called Goat Island; but, in consequence of a bend in the channel, by far the largest portion of the water is sent down by the Canadian side. On this side, therefore, is the grander cataract, which has been named the Horseshoe Fall, and which is about 600 yards in width and 154 feet high.

The water is so deep that it retains its green color for some distance below the brow of the precipice; and it rushes over with such force that it is thrown about 50 feet from the foot of the cliff. The separation caused by Goat Island leaves a large wall of rock between the Canadian and American falls, the latter being again divided by an islet at a short distance from Goat Island. This fall is from 8 to 10 feet higher than the Horseshoe, but only about 220 yards wider. The Falls can be seen from below on both sides, and every facility is given for viewing them from all the best points.

The river is crossed by a suspension bridge, and by a ferry about 200 or 300 yards below the Falls, where it is 1,200 yards wide. A stratum of a rock runs across the direct course of the river, 3 or 4 miles below, which, after forming a vast circular basin, with an almost impassable whirlpool, is forced away at right angles to its old channel.

The total energy of the Falls is calculated at 16,000,000 horse power, and the work of utilizing this power was begun on April 15, 1895, when the first large dynamo was run at full speed. On July 1 the first electric power transmitted for commercial purposes, 4,000 horse power, was sent to an aluminum factory a mile distant. On Jan. 17, 1896, the Niagara Falls Power Company accepted a grant for the transmission of electric power for lighting and power purposes to Buffalo.

On April 18, 1898, the fourth 5,000-horse-power Westinghouse generator had been tested by the power company. This machine, the first of a new set of dynamos to be installed and operated, brought the capacity of the station up to 20,000 electrical horse power; additional dynamos subsequently raised the capacity to 300,000 horse power. It is used in Syracuse, 165 miles from the source, and supplies power to the electric railways of Ontario, 240 miles away.