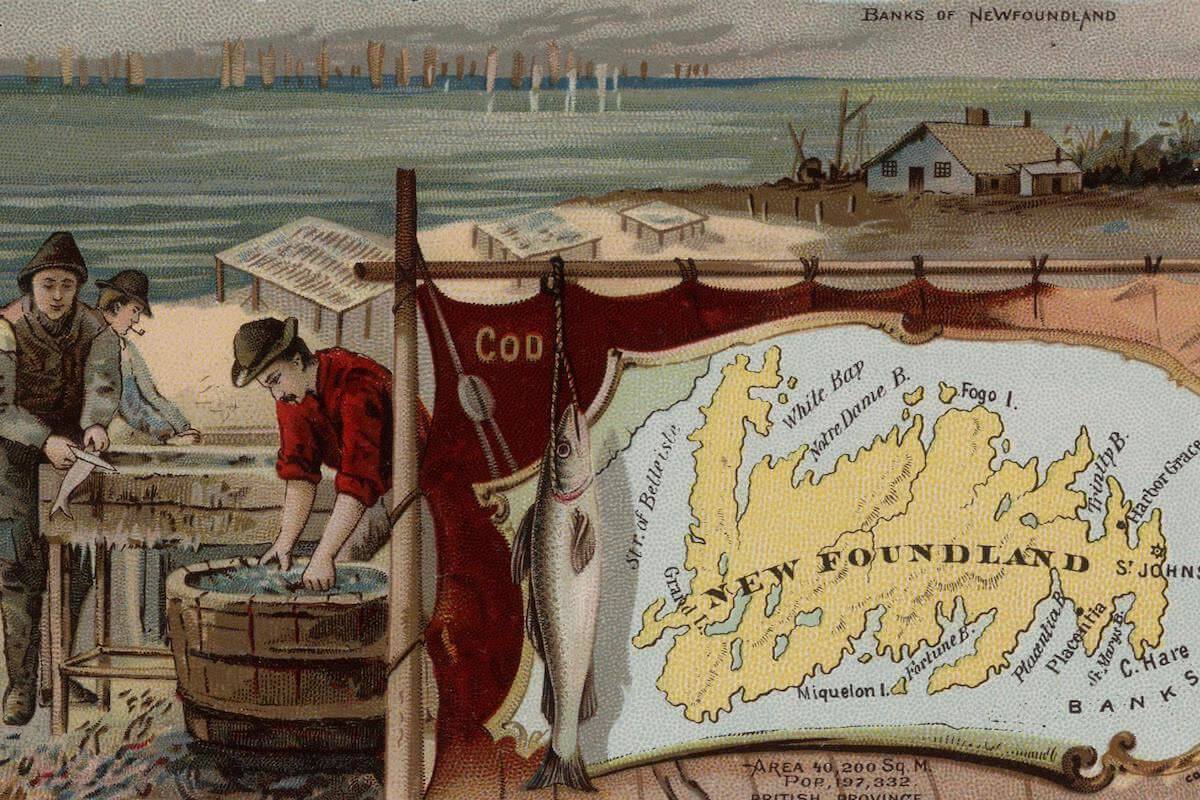 Newfoundland is the most ancient of the British colonies. For over a century it was the only colony owned and governed by England in the new world. In 1497 John Cabot made the voyage from Bristol to Newfoundland, which lies north of the Gulf of St. Lawrence and Cape Breton, and is separated from Labrador by the Straits of Belle Isle, only 10 miles wide in places. Cape Breton is 50 miles distant to the south.

It is alleged that the West-of-England fishermen kept their profitable voyages to Newfoundland concealed from the Crown for 50 years and that they were able to (do this by bribing the officials. One writer says that it was the great trade and fishery of Newfoundland that first drew Englishmen from the narrow ?eas and made them a nation of sailors. In the reign of Elizabeth 10,000 men were employed in the Newfoundland business, which amounted to more than £500,000 a year. The English Newfoundland fishermen played a gallant part in the defeat of the Spanish Armada in 1588.

Newfoundland was colonized by hard-working, humble settlers from Devonshire. Charles II sold Placentia and the western part of the island to Louis XIV, and this was the commencement of the vexed French-Shore question. The end of the seven years' conflict between England and France (1757—63) was signalized in Newfoundland by one of the most brilliant actions of the whole war, the defeat of the French and the recapture of St. Johns in 1762, The policy of England towards Newfoundland for a long time was anything but generous.

A witness before a committee of the House of Commons in 1793 said: "The island of Newfoundland has been considered in all former times as a great ship moored near the Banks during the fishing-season for the convenience of English fishermen only.' The first civil governor was appointed in 1825, and the first general election for a local House of Assembly was in 1832. Responsible government came in 1853. Not until 1881 was the railway, which has been built across the island, commenced. From that time the progress of the colony began. It gave life to lumbering and mining.

Physical Features. For a fast cruiser Newfoundland is only four days from Ireland (1,640 miles). This fact makes plain its importance to Great Britain and Canada as a base for guarding the Atlantic route. It is larger than Ireland, being the tenth largest island in the world. It contains 42,-ooo square miles. It is the key of the St. Lawrence and, as a naval base, commands the whole trade of the northern Atlantic. Its population is 237,531, all living on the coast. There is twice as much sunshine in Newfoundland as in Great Britain. Prom June to October the climate is delightful. Its interior is an immense game preserve. For its size it contains more caribou (a subspecies of the European reindeer) than any other part of the world. The forests of the center and north are almost impenetrable. and furnish safe quarters for the deer. Beaver, otter and foxes are found all over the island. The Atlantic salmon is found in hundreds of streams, and the numerous lakes abound with trout. The resemblance between Newfoundland and the British Isles is remarkable, Both occupy the same relative position> the one on the northwest of Europe, the other on the northeast of America. Both the British Isles and Newfoundland were broken off from the mainland.

Resources, The ice-burdened, northern current, laden with fish, furnishes food for the cod, herring and seals, which are the mainstay of the chief industry. Newfoundland has the largest catch of cod in the world. Almost every known metallic substance of value is found. There is an abundance of iron and copper. It has a promising coal-field (undeveloped). Copper ore to the value of $17,000,000 has been exported. At Bell Island, Conception Bay, one of the most valuable iron-mines in the world has been opened recently. It is owned by the Nova Scotia Steel Company and the Dominion Iron and Steel Company. There is an immense quantity of gypsum.

Only one sixth of Newfoundland is fit for agriculture. One half of it is rough and broken. One third is covered with lakes. The value of the fisheries in 1909-10 was over $9,000,000. About $300,000 worth of lumber is exported yearly. There is an enormous quantity of small spruce and fir near the lakes and rivers. Its total exports exceed its imports in value. A large part of its food and manufactured goods it uses are bought abroad. Its export of copper and iron ore in 1909-10 amounted to $1,368,367. Exploits River (the chief center of the salmon-fishing) is the largest in Newfoundland. It runs in a northeasterly direction and is 200 miles long. Placentia Bav on the south is noted for its valuable fisheries of cod, salmon and herring. St. Pierre and Miquelon Islands on the south belong to France, and trade heavily with Newfoundland and Canada. They are valuable as fishing-stations for French fishermen on the Banks. The fogs on the eastern coast are caused by the cold waters of the Arctic current meeting the warm waters of the Gulf Stream, The Banks of Newfoundland (elevations of the ocean-bed, 600 miles long and 200 broad) are about 100 miles from the shore.

The French, by treaty, acquired rights of fishing on part of the shore. This is called The French Shore. These rights have proved injurious to Newfoundland, causing friction in various ways. There are 500 miles of railway. The governor is appointed by the king 01 England. Its legislature is elected, Its capital is St. Johns, located on St. Johns Harbor, which is said to be one of the finest in the world. Its chief industry is exporting fish. It has a good graving-dock accommodating the largest vessels. It is the nearest port in America to Europe. Its population is 31,501.

Education. The public-school system is denominational. In the old days the only schools were those supported by the various religious denominations. The schools and colleges annually prepare their pupils for written examinations, the papers being prepared in England and the answers sent to England for marking. This is done to avoid any suspicion of denominational partiality or control.