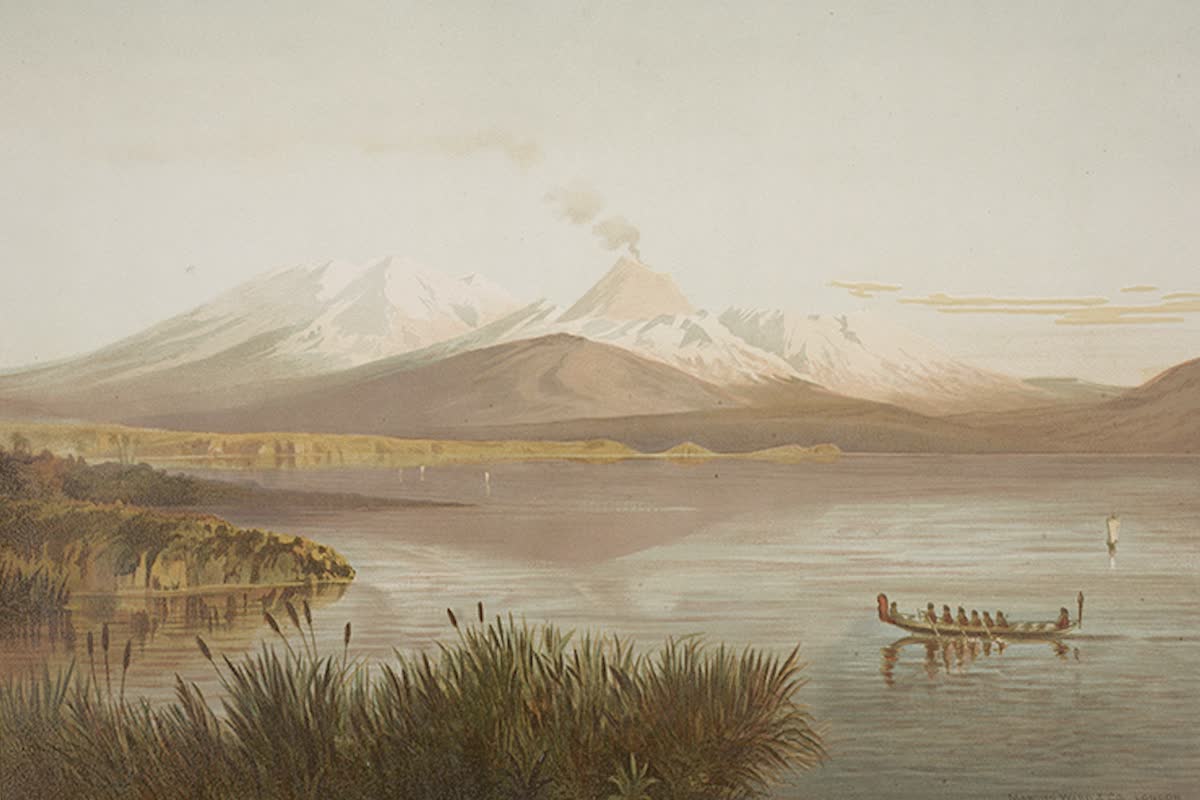 NEW ZEALAND, a dominion of the British empire, consisting of a group of islands in the South Pacific Ocean, two large islands, called North and South (or Middle) Islands, and a third of comparatively insignificant size, Stewart Island; length of the group, N. to S., about 1,000 miles; area, 104,471 square miles. Pop. (1918) estimated 1,106,677, besides about 45,000 Maoris. Capital, Wellington, in North Island; other chief cities: Dunedin, Auckland, Christchurch.

New Zealand lies in the Pacific about 1,200 miles southeast of Australia and is the largest island in that ocean. It was discovered by Tasman in 1642. Captain Cook took possession for England in 1769. Settlement began about 1820. It is a British colony, with a local government extending to 1852. There are two principal islands, known as North Island and Middle Island, beside South or Stewart Island and some small outlying islets. The total area is estimated at 104,751 square miles, with a population (1911) of 1,009,244, exclusive of aborigines who chiefly are Maoris (62,184 in number). There were 2,570 Chinese.

New Zealand was discovered by Tasman in 1642, but little was known of it till the visits of Cook in 1769 and 1774. The first permanent settlement was made by missionaries in 1815. In 1833, a resident was appointed, with limited powers, and subordinate to the government of New South Wales. In 1840 New Zealand was erected into a colony; in 1841 it was formally separated from New South Wales and placed under its own independent governor; and in 1852 it received a constitution and responsible government. In 1865 the seat of government was removed from Auckland to Wellington. In 1873 the public works policy was inaugurated, and large loans were raised for immigration, harbors, railways, roads, etc. In 1876 the provinces were abolished; the colony was divided into 63 counties, and all government centralized at Wellington.

New Zealand furnished over 100,000 men in the World War. Of these nearly 15,000 were killed. The total casualties were over 52,000. New Zealand troops distinguished themselves wherever they were engaged and took an especially prominent part in the operations in the Dardanelles, where, with the Australian troops, they were called Anzacs. Conscription was introduced in 1916.

The chief town is Auckland, with a population, including suburbs, of 102,676. Wellington (70,729) is the seat of government. The other towns of note are Christchurch (80,193) and Dunedin (64,237). Of volcanic origin, New Zealand has chains of high mountains, hot geyser springs and other natural features of bold and varied character, incident to its eruptive origin. It has a temperate climate favorable to the growth of rich, succulent grasses and the rearing of sheep and cattle. Its area under crop in 1911 exceeded 16,000,000 acres, while 17,000,000 remained under forest, and 9,000,000 were barren mountain tops, lakes and worthless country.

Large amounts of capital are invested not only in agriculture and mining, but in meat-freezing and preserving, in tanning, wool scouring and factories for butter and cheese. Besides the wool crop and the farm and dairy products, there is a large annual export of tallow, hides, skins and leather, together with gold, valued at $10,000,000 for the yearly output. Progress was long retarded by wars with the Maoris, a magnificent race of barbarians.

There are two houses of parliament, the members of both of which are paid. In the popular chamber sit four Maori members, representing native districts under the Maori representative act. There is no state church, nor is any state aid given to any religion.

Education. The school system is administered by an educational department under a minister, assisted by education boards and school committees. The University of New Zealand is solely an examining body, awarding scholarships to be held by students at affiliated colleges. These are Otago University at Dunedin, with 35 professors; Canterbury College at Christchurch, with 18 professors; Auckland University College, with 14 professors; and Victoria College, Wellington, with nine professors, including lectures at each.

All are endowed with land, and have over 1,500 students in attendance. Public schools numbered 2,096, teachers 4,408 and pupils 156,324. There were 318 private schools with 18,981 pupils; three schools of mines; four normal schools; five central schools of art; 11 industrial schools; and 100 Maori schools. Most of the railways belong to the state and yield a good annual revenue; the gross mileage in both islands is 2,604 miles. In the chief towns there are tramways worked by cables, steam motors or electricity. New Zealand in 1899 offered a military force to the imperial government for service in South Africa. It is world-famous for its experiments in statesmanship and the nationalization of industry.