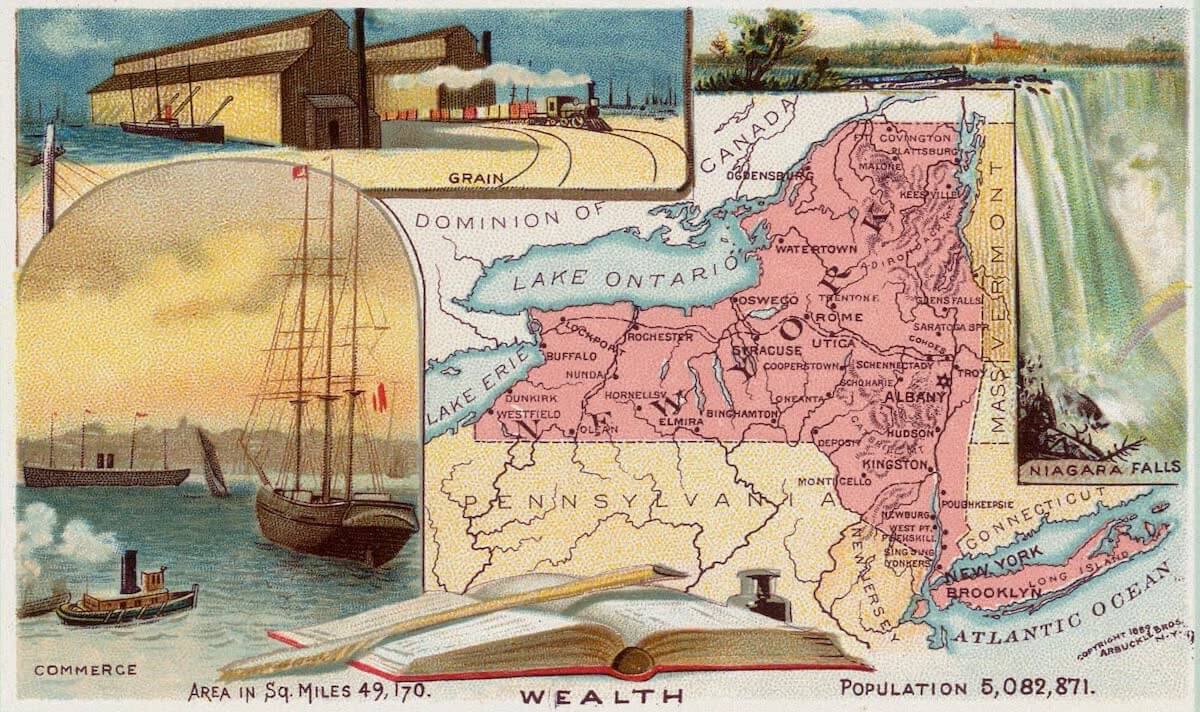 New York, a North-Atlantic state of the Union, of first-class importance in a political, commercial and industrial aspect, entitling it to rank, as claimed, as The Empire State. It is the seaward gateway of the chief immigration and trade of the Old World into the New. Its area is 49,170 square miles, its length being 310 miles and its breadth 320 miles.

On the north it is bounded by Lake Ontario, the St. Lawrence and Quebec; on the west by Lake Erie and Niagara River; on the south by Pennsylvania, New Jersey, New York Bay and the Atlantic; and on the east by Lake Champlain, Vermont, Massachusetts, Connecticut and Long Island Sound. On its extreme southwestern corner the lower Hudson separates New York (state and city) from New Jersey. Embraced in the state are such islands as Manhattan, Long Island and Staten Island in the south; smaller ones in New York Bay, Jamaica Bay and East River; and others in Niagara River, the St. Lawrence and Lake Champlain.

The region and its chief waterways were at an early era visited by navigators and explorers, Portuguese, French and Spanish, Verrazano, it is recorded, discovering New York Bay and the mouth of the Hudson in 1524. It, however, was not until 1609 that the region came into historic note, for in that year Hudson ascended the river in the Dutch fur-trading interest; while almost simultaneously Lake Champlain was discovered by the founder of Quebec and father of New France. The Dutch astutely profited by the enmity of the Iroquois to the French, for they made friends of the Iroquois, who subserved their interests, or at least did not oppose their colonizing and trading in New Netherland.

In 1623 settlements began to be formed, first by a number of Walloons on Manhattan and Long Island, while Fort Orange (Albany) was founded on the upper Hudson. The Indians, found at first to be tractable, were induced to part with their lands, and from them not only Manhattan and Staten Islands were acquired by Peter Minuit and Michael Pauw, but Killian Van Rensselaer also secured holdings in the Albany region; while colonists, including French Huguenots and English Puritans, were encouraged to settle by the cancelling of the Dutch company's monopoly of trade.

For a time, however, there was trouble with the Algonquins, and settlements in the neighborhood of New Amsterdam were destroyed and the colony threatened with extinction. Under Governor Stuyvesant (1647-64) the times were more or less stormy, but the colony grew apace. In the last year of Stuyvesant's rule New Amsterdam was confronted by the presence of an English fleet come to enforce the title of the region given by Charles II to the Duke of York, his brother. With the surrender of the garrison, Dutch rule, save in 1673-4, came to a close, and New Amsterdam gave place to its present title of New York.

Under the English crown the colony remained until the Revolution, being under the control and sway of over thirty colonial governors. During this period there at times were menacing movements on the border settlements; there also were the harassing hostilities of the French and their dusky allies in 1757-63, the period of the French and Indian War; besides collisions during the era preceding the Revolution between the colonists who had grown restive under monarchical rule and the harsh sway of gubernatorial authority.

The battle of Saratoga (1777) was the turning-point of the American Revolution, and it, with the battles of Oriskany and Walloomsac, two more of the most important battles of the Revolution, was fought in New York. New York also was the scene of considerable fighting in its northern area during the War of 1812-14, a conflict which bore heavily upon the border settlements from the Niagara district to the eastern end of Lake Ontario and on the St. Lawrence borders from Ogdensburg to the region round Lake Champlain. With peace came the era of canal construction, internal development, increasing colonization and, later, the beginnings of the railway system and improved highways. The state bore its share of the responsibilities and burdens entailed by the Civil War. Since then its progress has been continuously substantial and gratifying.

Surface and Drainage. The general contour is hilly and undulating, the loftiest regions being among the Adirondacks and the Catskills, with high plateaux here and there, notably on the Taconic Range and along the Highlands of the Hudson, alternated by valleys. These elevated peaks range from 1,500 to over 5,340 feet, the latter being the height of Mount Marcy in the Adirondacks. The state has many attractive lakes, the chief of which are Lakes Seneca, Cayuga, George, Chautauqua, Oneida, Champlain and Canandaigua; while it is broken by rivers in its different sections. The principal river is the Hudson, which rising in the Adirondacks flows south into New York Bay and the Atlantic: it is navigable for 150 miles from its mouth as far as Troy. Its main tributary is the Mohawk, which drains the central part of the state and supplies good waterpower for the industries along its course. The other chief streams are Oswego, Niagara, Genesee and Black Rivers (which find their outlet in the north into the southern waters of Lake Ontario), the Susquehanna, the Oneida, Chemung, Delaware, Saranac, Au Sable, Oswegatchie, Chenango and Charlotte. The great waterway of the St. Lawrence is on its northern borders. The climate naturally varies in different areas, being colder in the northern and warmer in the southern and coastal region. There is an abundant rainfall, denser in the north, where the winters are usually protracted and severe. In the Mohawk and Genesee Valleys the soil is good for farming, though elsewhere it needs fertilizers. The original forests, save in the preserved districts of the Adirondacks, have disappeared, largely as the result of fires and indiscreet waste. This has had its effect upon the climate, while it has limited the area of game preservation.

Natural Resources. Though not notable as a farming state, New York makes a fair showing in the production of cereals, especially oats and Indian corn. In 1910 it raised over 46 million bushels of oats, over 26 million of corn and close upon 10,000,000 of wheat. The yield of hay, potatoes and buckwheat was also large. In dairy products the state also makes a good showing; in 1900 New York producing 62,096,690 eggs; the poultry yield, moreover, was large; while nearly $10,000,000 were the net proceeds from the sales of butter and over $36,000,000 from the sales of milk. A considerable sum is also derived annually from the fruit orchards, especially from the sales of grapes and apples; while the cultivation of flowers, chiefly for the New York City markets, is a profitable industry. Stock-raising also is a large industry, the number of horses in 1910 being close upon 591,000, of cattle 2,423,000, of sheep nearly 1,000,000 and of swine 666,179. The mineral resources consist chiefly of building-stone, including limestone, sandstone, granite and marble; besides slate, iron-ore, clay, bricks, tiles, mineral waters, salt, petroleum and natural gas. The value of fisheries in 1901 was under $4,000,000.

Manufactures. New York leads the Union in volume of manufactured goods, as also in the amount of capital employed. In 1909 the state had 44,935 manufacturing establishments, employing a capital of more than $2,779,000,000, with 1,003,098 wage-earners, and turning out $3,369,490,000 in value. A large volume of this enormous total trade is credited to New York City, the metropolis, where cheap foreign labor is available in such industries as men's and women's factory-made clothing, and that turned out by contract in small workshops and tenements, including men's furnishing goods (shirts, hosiery and knit-wear), women's furs, millinery and lace goods, embracing silk, cotton, woolen and worsted goods; with the output in other branches of trade — boots, shoes, furniture, carpets, rugs, jewelry, confectionery, carriages, wagons, paper, printing, lithographic and publishing output, chemical products, electrical apparatus and supplies, iron-work, foundry and machine products, patent medicines, liquor, tobacco and cigars; besides agricultural implements, timber, lumber, planing-mill products and flour and grist-mill products. Outside of New York City much of the volume of trade in special lines is turned out in other towns and districts, aided in part by the waterpower facilities of the localities. Troy, for instance, has become the manufacturing seat of shirts, collars and cuffs; Gloversville is noted for its glove trade; Cohoes for hosiery and knitted goods; Yonkers for carpets and rugs; Rochester for flour-milling and its boot and shoe trade; and Brooklyn for breweries, sugar-refineries, foundries and machine-shops.

Commerce and Transportation. With its ocean and lake ports, canal and vast railway facilities, the commerce of New York is of stupendous and steadily growing volume, both local and foreign. The imports of New York City in 1910 were close upon $951,500,000 in value, while its exports were about $795,000,000. The foreign tonnage entering and clearing for 1911 was, entered 13,428,950 tons; cleared 13,336,893 tons. Large also was the trade of the interior ports, as Buffalo, Niagara Falls, Ogdensburg, Oswego, Rochester and Plattsburg. Extensive are the banking facilities, more particularly in New York City, added to by the operations of the trust-companies, the general soundness of all of which has in repeated financial crises been put to protracted and severe tests. In 1911 the state had 458 national banks with an aggregate capital of close upon $171,500,000, eposits of $1,010,000,000 and loans exceeding $1,192,000,000. There also were 198 state banks with about $33,000,000 of capital and $428,000,000 on deposit. There were, moreover, some 85 trust companies, with about $72,000,000 of capital and about $1,185,000,000 in deposit. Besides these the state in 1910-11 had 141 savings banks, with 2,957,650 depositors and over $1,561,000,000 on deposit. An average of $527.83 for each depositor. The activities and extent of the banking of the state and its chief metropolis may be otherwise gathered by noting the volume of the transactions for 1911 in the New York Clearing-House, which totalled $92,420,000,000 or average daily clearings of $305,016,898. The state's receipts and expenditures to-day about balance at $30,000,000 annually, the chief outlay being for education, for hospital and charities' maintainance, besides the expenses incurred by the executive, legislative and judicial departments, and for canal maintenance. The debt of the state to-day, incurred chiefly since 1893 in improving the canals, is only about $11,000,000. The state's railway mileage (8,225 miles in gross) consists of the N. Y. Central and Hudson River; Erie; N. Y., Ontario, and Western; Delaware, Lackawanna and Western; Lehigh Valley; Delaware and Hudson; and Long Island railways. Besides these roads there are the great commercial arteries of the Hudson and of the canals — the Erie, Oswego and Champlain, — the total expenditure of the state on which has exceeded $100,000,000, nearly $66,000,000 being spent on the Erie Canal.