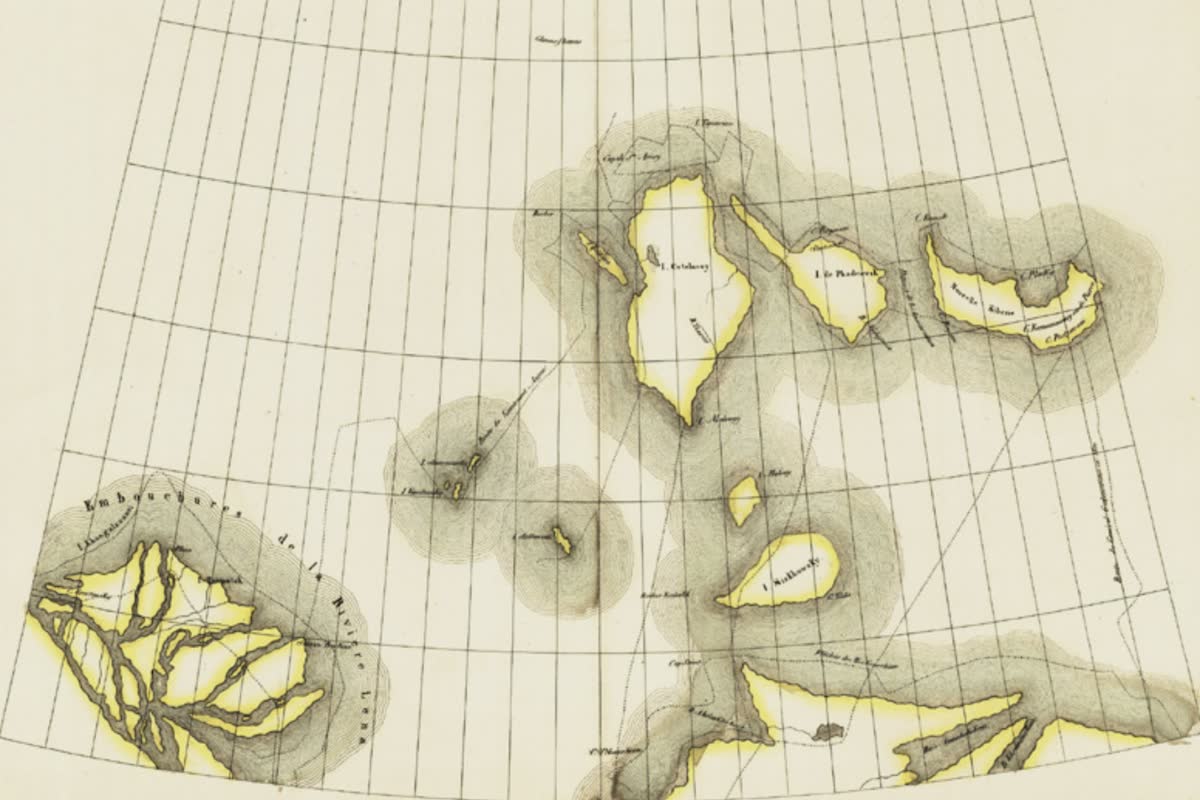 NEW SIBERIA ARCHIPELAGO, a group of islands situated off the Arctic coast of Siberia, from 73° to 76° 6? N., and 135° 20? to 148° E. The name is loosely applied, covering either the northern group only of these islands, for which the name of New Siberia Archipelago, or of Anjou Islands, ought properly to be reserved, or the southern group as well, which ought to maintain its name of Lyakhov Islands.

Some confusion prevails also as to whether the islands Bennett, Henrietta and Jeannette, discovered by the “Jeannette” expedition, ought to be included in the same archipelago, or described separately as the Jeannette Islands. The first of these three belongs geographically, and probably geologically, to New Siberia Archipelago, from which it is only 97 m. distant. As to Henrietta and Jeannette Islands, situated 200 m. N.E. of New Siberia Island, in 157° to 159° E., they can hardly be included in the New Siberia Archipelago. There seems, moreover, to be land due north of Kotelnyi Island in 78° N., first sighted by Sannikov and described as Sannikov Land. It was also seen by Baron Toll.

The New Siberia or Anjou Islands consist, beginning from the west, of Kotelnyi, the largest (116 m. long, 100 m. wide), having the small island Byelkovskiy near its western shore; Thaddeus (Faddéevskiy), in the middle; and New Siberia (Novaya Sibir), in the east (90 m. long, 40 m. wide). Kotelnyi is the highest and most massive of the four, reaching a maximum altitude of 1200 ft. in the Malakatyn-tras mountain.

Its north-east portion consists of Upper Silurian coral limestones (Llandovery division), containing a rich fossil fauna and representing a series of folds running north-northwest. The same Silurian deposits are widely spread on the mainland as far as Olenek. The western portion of Kotelnyi is built up of Middle Devonian limestones and slates, folded the same way, of which the fossil fauna is similar to that of the Urals. Triassic slates appear in the south-east. Diabases pierce to Devonian rocks, and olivine rocks appear as dykes amidst the Triassic deposits. The Malakatyntras is also made up of volcanic rocks.

The eastern portion of the island, named Bunge’s Land, is thickly covered with Post-Tertiary deposits. Thaddeus Island has a long promontory, Anjou, protruding north-westwards. New Siberia Island attains altitudes of 200 to 300 ft. in its western portion. A range of hills, composed of Tertiary deposits, and named Hedenström's Mountains, runs along its south-western coast, and the same rocks form a promontory protruding northwards. The so-called Wood Mountains, which were supposed to be accumulations of floating wood, are denudation’s of Miocene deposits containing layers of brown coal with full stems of trees. These Tertiary deposits are characterized by a rich fauna; fully developed leaves of poplars, numerous fruits of the mammoth tree, needles of several conifers, &c., being found in them, thus testifying to a climate once very much warmer. The only representative of tree vegetation now is a dwarf willow 1 in. high.

The Lyakhov Islands consist of the Bolshoy (Large), or Blizhniy (Nearest), which is separated by Laptev Strait, 27 m. wide, from Svyatoy Nos of Siberia; Malyi (Small), or Dalniy (Farthest), to the north-west of Blizhniy; and three smaller islands—Stolbovyi (Pillars), Semenovskiy and Vasilevskiy—to the west of Malyi. Dr Bunge found Bolshoy to consist of granite protruding from beneath non-fossiliferous deposits; while the promontory of Svyatoy Nos consists of basalt hills, 1400 ft. high.

Along the southern coast of Bolshoy Baron Toll found immense layers of fossil ice, 70 ft. thick, evidently relics from the Ice Age, covered b an upper layer of Post-Tertiary deposits containing numbers of perfectly well preserved mammoth remains, rhinoceros, Ovibos, and bones of the horse, reindeer, American stag, antelope, saiga and even the tiger. The proof that these animals lived and fed in this latitude (73° 20? N)., at a time when the islands were not yet separated from the continent, is given by the relics of forest vegetation which are found in the same deposits. A stem of Alnus fruticosa, 90 ft. high, was found with all its roots and even fruits.

Basalts and Tertiary brown coal deposits enter into the composition of the southern extremity of Bennett Island, and the mountains of Sannikov Land, seen by Toll, have the aspect of basaltic “table mountains.”

The climate of these islands is very severe. In 1886 the winter ended only in June, to begin anew in August (21st May, ?5.8° F.; 16th October, ?34.6°). The highest summer temperature was 50°. Flocks of geese and other birds come to the islands from the north (Bunge and Toll), as also the gull Lestris pomarina, which feeds chiefly on the lemming. The lemmings are very numerous, and in certain years undertake migrations to the mainland and back. Reindeer, followed by wolves, come also every year to the islands; the polar fox and polar bear, both feeding on the lemmings, are numerous. Hunters come in numbers to the Lyakhovs, which must have been long known to Arctic hunters.

A Yakutsk Cossack, named Vaghin, wintered on Bolshoy in 1712, but it was a merchant, Lyakhov, who first described the two greater islands of this group in 1770, and three years later reached on sledges the largest island of the New Siberia group, which he named Kotelnyi. The Lyakhovs were mapped in 1777. J. Sannikov, with a party of hunters, discovered in 1805–1808 Stolbovyi, Thaddeus and New Siberia Islands, and merchant, Byelkov, the Byelkovskyi Islands. He sighted the land to the north of Kotelnyi and the land to the north of New Siberia (now Bennett Island). A Russian officer named Hedenström, accompanied by Sannikov, explored the archipelago and published a map of it in 1811. Lieutenant Anjou visited it in 1821–1823. A scientific expedition under Dr Alexander Bunge (including Baron Eduard Toll) explored it in 1885–1886. Baron Toll revisited it in 1893 with Lieutenant Shileiko, and again in 1900 with F. G. Seeberg. Papers were found on Bennett Island showing that he left it for the south in November 1902, but he never returned home, and two relief parties in 1903 failed to find traces of him.

There are no works available for the New Siberian Islands collection.