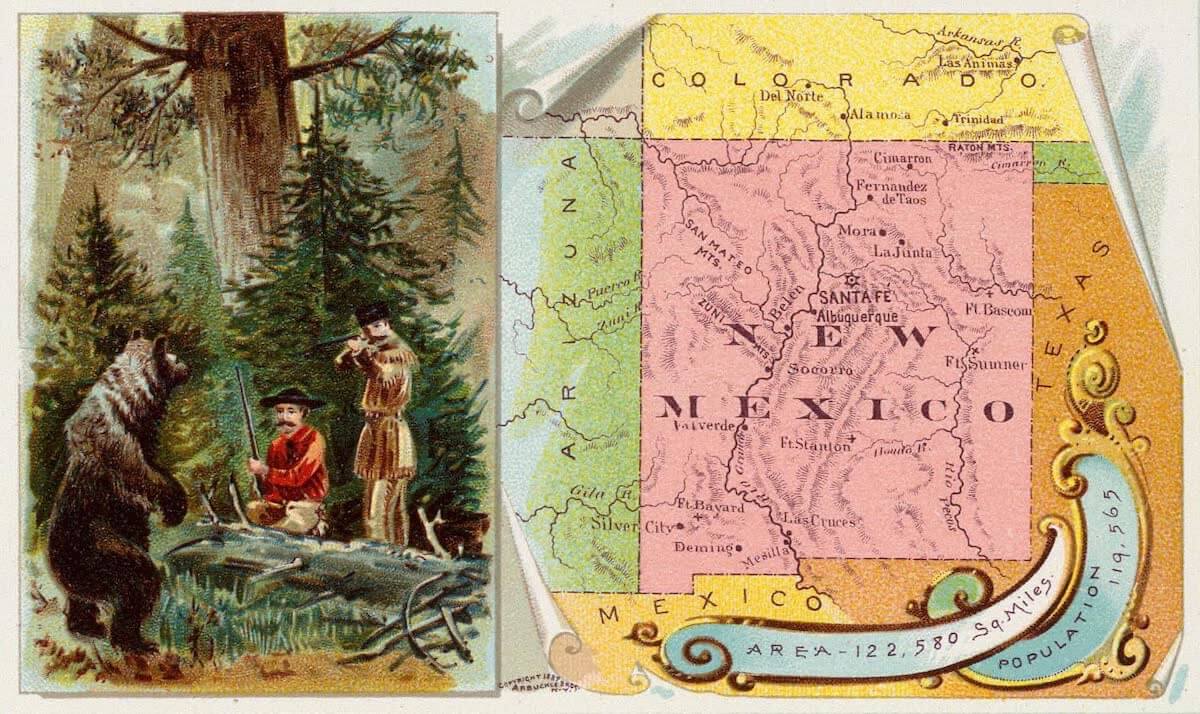 New Mexico. A state located in the southwestern part of the United States. It lies south of Colorado, west of Oklahoma and Texas, north of Texas and Mexico and east of Arizona. The state is nearly square, and contains 122,580 square miles. It is nearly equal in size to Pennsylvania, New York and Maine combined. It was admitted as a state Jan. 6, 1912.

The ruins of numerous communal houses built in great caves in lava formations or on the tops of isolated mesas bear evidences of a prehistoric people that was well-advanced in building, weaving and the manufacture of earthenware. This prehistoric people understood irrigation and agriculture. The Spaniards who first settled in Mexico made expeditions into New Mexico early in the 16th century, and found many prosperous Indian villages, called pueblos.

In 1598 Oñate founded a colony near San Juan on the upper Rio Grande and became the first governor. In 1582 Espejo settled at Santa Fé, the second oldest permanent white settlement in the United States. For nearly 100 years the king of Spain controlled New Mexico through his governors, but in 1680 there was a general revolt of the Indians and all foreigners were killed or driven out.

Twelve years later (1692) Vargas reconquered the territory, and it remained a province of Mexico until 1846, when it was taken by General Kearny in the war between the United States and Mexico and was ceded to the United States on May 30, 1848, by the Treaty of Guadalupe Hidalgo. That portion of New Mexico which lies south of 32° N. was purchased from Mexico in 1853 under the Gadsden Purchase.

Inhabitants. The population (1910) is 327,301; nearly half of whom are Spanish, and about 40,000 are Indians. Thousands of land entries are now (1911) being made, and all by English-speaking people; the percentage of native inhabitants therefore is constantly decreasing.

Surface. The state is traversed by the southern end of the eastern range of the Rocky Mountain system. Hence the surface is very irregular—a great plateau from 4,000 feet to 8,000 feet high, cut by river-valleys, canyons, mountain-ranges and peaks. The continental divide passes irregularly north and south through the middle of the western half of the state; hence nearly all of the drainage is into the Gulf of Mexico by means of the Canadian River, the Pecos River and the Rio Grande; a very small portion of the western part drains into the Gulf of California through the San Juan, Little Colorado and Gila Rivers, tributaries of the Colorado. The principal mountain-ranges are the Raton, the Culebra and the Jemez of the north; and the Sacramento, the San Andreas and the Black of the south; all of which have a north-and-south trend. Many peaks reach 9,000 to 12,000 feet. The striking features of the landscape are the large mesas or tablelands, many capped with lava.

Climate. New Mexico has an exceedingly healthful climate, and is known as the Land of Sunshine, having 250 days of sunshine in a year. The mean annual temperature of the principal cities ranges from 50° to 55°, which is regarded as ideal. The rainfall is very light, averaging about 12 inches. The territory is a mecca for hundreds of tuberculous patients who enter it yearly and receive great benefit. Wind velocity is often high, but tornadoes are unknown.

Education. The public-school system was organized in 1891. Since then educational advantages have grown rapidly. The state board of education through its secretary, the state superintendent of public instruction, has general supervision over the public schools, and in each county there is a county superintendent. More than 56,000 children are enrolled in the public schools and 1,500 teachers employed. City schools are excellent; rural schools inferior, but gradually improving. Spanish is the prevailing language in the mountainous districts, but English is the language of the schools. The educational institutions are located as follows: University of New Mexico, Albuquerque; Normal University, East Las Vegas; Normal School, Silver City; School of Mines, Socorro; Agricultural College, Las Cruces; Military Institute, Roswell; School for the Deaf, Santa Fé; School for the Blind, Alamogordo.

Industries. The most important industries are sheepraising and woolgrowing. Fully 4,000,000 head of sheep are found within the territory. Thousands of head of cattle are raised on the ranges and shipped to the central west. The annual shipment is from 75,000 to 100,000 head. Mining is an important industry. Coal, copper, silver, gold, lead and zinc are mined in considerable quantities. The output of coal and copper comes first in importance. The annual output of lumber amounts to over 100,000,000 feet. The forests are in the highest mountain regions. The largest sawmill and lumber-yard is at Albuquerque. Logs are brought from the Zuñi Mountains, 100 miles distant. Agriculture is an important industry in the large valleys where water may be secured for irrigation. Alfalfa and fruit constitute the most important crops, although kafir corn, maize, millet, wheat, oats, rye, barley and vegetables are raised. In some sections dry farming succeeds in favorable years. Manufacturing is not an important industry, although breweries, ice-factories, smelters, woolen mills and sash and door factories are found in the larger cities.

Transportation. The most important rail road is the Atchison, Topeka and Santa Fé which traverses the central portion of New Mexico from north to south and branches west from Albuquerque to the coast. The central portion is therefore connected directly with Denver, Kansas City and Chicago; with El Paso and the City of Mexico; and with Los Angeles and San Francisco. The Rock Island; El Paso and Northeastern; Denver and Rio Grande; and Santa Fé Central are other important roads cutting the territory. Several automobile routes have been established connecting various points of the different railroads, thus saving long distances and much time.