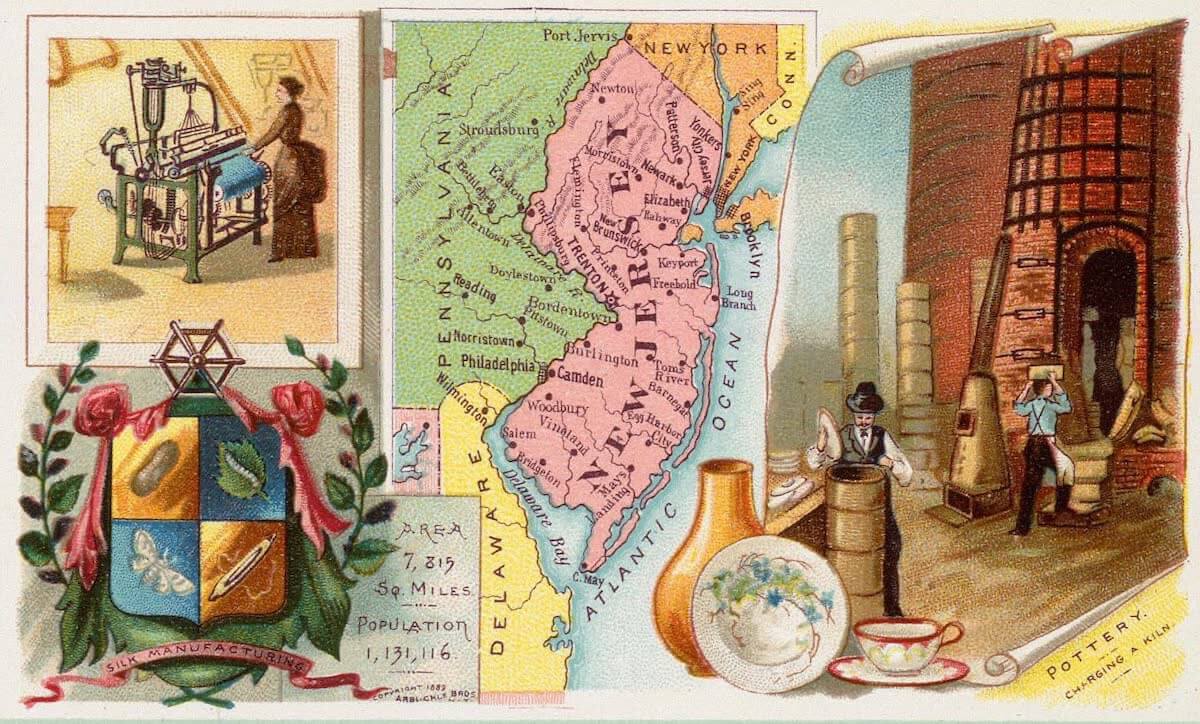 New Jersey, a small but important state, one of the original Thirteen, 160 miles in length and 70 in extreme breadth, with an area of 7,815 square miles; capital Trenton (96,815). The population of the state (census 1910) is 2,537,167. It is bounded on the north and northeast by New York; on the south and southeast by Delaware Bay and the Atlantic; while Delaware River separates it on the west from Pennsylvania. It is closely connected with Manhattan Island and New York City by ferries across the Hudson River and the Lower Bay of New York to Hoboken, Jersey City and other eastern points of the state, these towns, with Newark and Elizabeth, being, as one may say, suburbs of New York City. Of easy access also from New York City are the towns and summer resorts of New Jersey's coast by rail and steamer, including Long Branch, Asbury Park, Ocean Grove, Atlantic City and Cape May.

New Jersey, as we to-day know it, has an early history under the Dutch, who claimed it as a part of New Netherland; while settlement was effected in the region of the present Bergen County and beside the Delaware River early in the 17th century by Danes and Swedes, who, however, came under the jurisdiction of Peter Stuyvesant, Dutch governor of New York.

In 1664 the territory was conveyed by Charles II of England to James, Duke of York, who presently reconveyed it to two favorites, John, Lord Berkeley, and Sir George Carteret, the latter then governor of the Island of Jersey. Under these two lords-proprietor, the colony (the region between the Hudson and the Delaware Rivers) was governed, with some changes, until the Revolution, Carteret being for some period of the time governor in person, with Elizabethtown as his capital. In 1674 Berkeley sold his interest in the colony to two Quakers, when the region was divided into two sections, East and West New Jersey, Carteret retaining the former half until 1682, when his heirs sold it to William Penn and his Quaker associates.

Early in the 18th century both colonies were ceded by their respective proprietors to the Crown, when they were united and came under the rule of governors of New York, the colony retaining its separate assembly. New Jersey in 1738 began to be under a single governor of its own until 1776, when the last royal governor was deposed and the colony became a state of the American Union, with a constitution, which was ratified in 1787. In 1844 a new constitution was given it, which in 1875 was revised. Trenton became the capital in 1790.

Surface and Climate. The natural features are not noteworthy, for the surface, for the most part, is a gently undulating plain, broken here and there by slight elevations, as the Kittatinny Range, the Navesink Highland, the Palisades of the Hudson and, in the northern part, the Appalachian Highland extension. Besides the Palisades other interesting features are Delaware Water-Gap, the low-lying beaches of the Atlantic coast and the lake resorts of Lake Hopaticong and Greenwood Lake. The rivers are the Passaic and Hackensack, which empty into Newark Bay, the Manrice, which falls into the Delaware, and the Raritan, which, following through Raritan Bay, finds its way into Lower (N. Y.) Bay and the Atlantic. The climate is temperate, varying slightly between north and south and between the lowlands and the highlands. The soil is composed chiefly of sand and clay, not rich enough on the whole to do without fertilizers, save in the river valleys.

The total farm acreage in 1910 was 2,573,857 acres, two thirds being improved farm land; while the average size of the farms did not exceed 77 acres. The extent of the dairy industry will be realized when it is related that over $6,000,000 represent the annual yield for milk. The returns from the orchard are large when we consider the state's comparatively small area. The chief fruits raised, however, are confined in the main to peaches, apples, strawberries and cranberries. The mining industries are limited to the quarrying of buildingstone and granite, besides soapstone and talc and magnetite ores, together with a considerable yield from the brick and tile yards and from the beds of Portland cement. The yield from lumber and timber products aggregated $1,404,000 in 1909. The fisheries form another source of wealth, the value of the catch in 1900 amounting to $4,750,000, besides the sums obtained from the oyster and clam yield.

Manufactures. New Jersey takes high rank among manufacturing states, the range of manufactured articles being both large and varied. They include, under textiles, cotton, woolen, worsted and silk goods; besides iron and steel, foundry and machine shop products; sewing machines; electrical apparatus; glass, pottery and terracotta ware; jewelry, leather and rubber goods; malt liquors; cigars and tobacco; lumber; chemicals; oil and petroleum refining; and other wares and products. In 1900 the gross value of the manufactures was estimated at close upon $612,000,000, the number of wage-earners exceeding 241,000 and the total capital employed being over $500,000,000. The number of manufactories in 1900 was 15,481. The chief manufacturing centers are Newark, Jersey City, Paterson (the seat in especial of silk trade), Bayonne, Camden, Perth Amboy, Trenton (the seat of the trade in pottery), Passaic and Elizabeth, the latter being noted for its sewing-machine industry.

Commerce and Transportation. The state is well-supplied with financial institutions, there being to-day 196 national, 20 state and 26 savings banks, within its jurisdiction, besides 86 loan and trust companies, the combined deposits in which amount to close upon $460,000,000. In 1911 the total capital of the national banks approached $22,000,000, of the state banks, $2,000,000 and of the trust companies doing business in New Jersey over $10,000,000. The state revenue is in the main derived from taxes on the railroad and other corporations, amounting to close upon $5,000,000 annually, with like disbursements chiefly expended on school maintenance, on the public roads and on the penal and charitable institutions.

The transportation facilities are good, the railway mileage in 1910 being 2,260 miles, chiefly credited to the Pennsylvania system and the Delaware, Lackawanna and Western, Jersey Central, Erie and Lehigh Valley lines, the eastern terminals of all of which are at Hoboken and Jersey City, the arriving and leaving ports, moreover, of two of the transatlantic steamship lines — the Hamburg-American and North German Lloyd Companies. Besides these facilities the state still uses its two canals (chiefly for the transportation of coal) the Morris and the Delaware and Raritan, the former 100 miles in length and the latter 65 miles. The state also has an electric railway mileage exceeding 1,100 miles in extent.

Education and Government. New Jersey does liberal things for education, its expenditure for public schools in 1910 exceeding $18,000,000 and being chiefly expended on new buildings, maintenance and teachers' salaries. The system is directed by a superintendent of public instruction and a board of education. The schools number close upon 2,000, giving employment to 12,087 teachers, chiefly women, while the average daily attendance approaches 325,000 out of an enrollment of 429,797. There is a normal School at Trenton, with institutes elsewhere in the state for training teachers, in addition to about 200 public and private high schools and academies, with over 16,000 students in attendance.

Higher education is provided, in addition to technical school institutes at Hoboken and Newark, by Princeton University, which now has 174 instructors and 1,442 students, by Rutgers College at New Brunswick with 48 instructors and 344 students, by Seton Hall College, at South Orange, with 25 instructors and 225 students, by St. Peter's College (R. C.) at Jersey City, by St. Benedict's College (R. C.) at Newark, by Bordentown Female College and by Stevens Institute of Technology at Hoboken, in addition to the industrial, charitable and penal institutions under the care of the board of charities. The state has a legislature, consisting of 21 senators and 60 members of the general assembly, which meets in annual session. It sends 2 senators and 10 representatives to the Federal Congress. The local executive is under the direction of the governor, who is elected for three years and not eligible for re-election. His veto on legislation can be overridden by a majority vote in the House. There also is adequate provision for the maintenance of judicial authority.