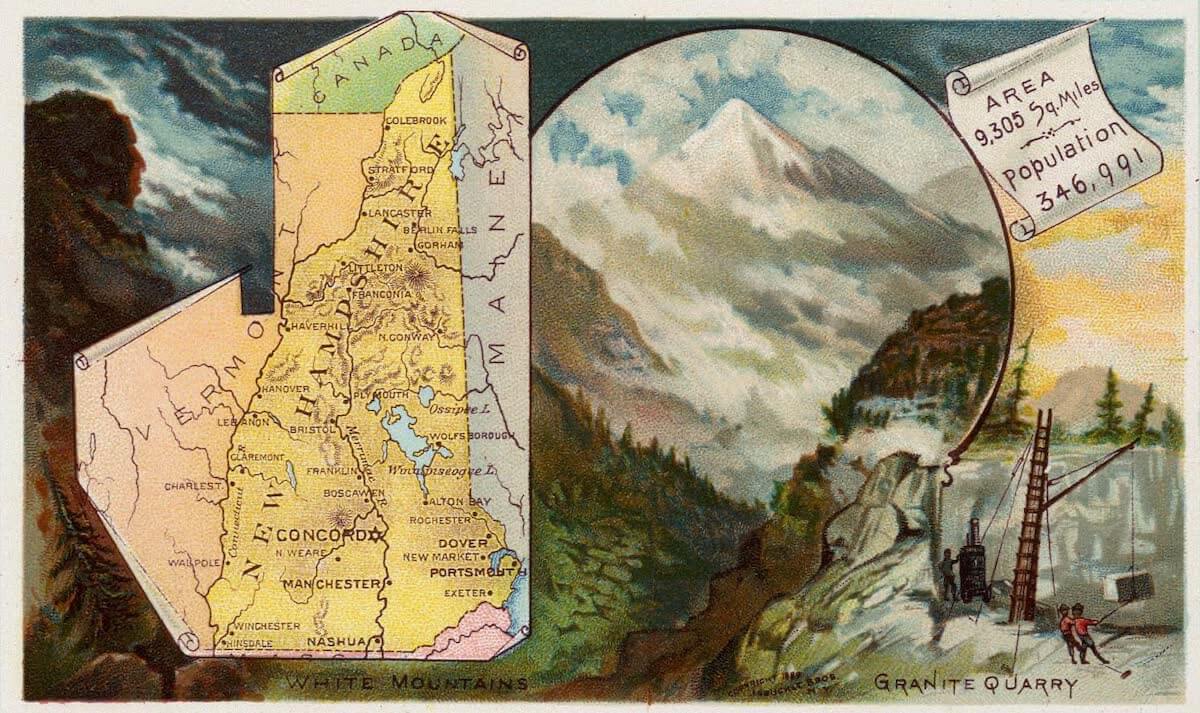 The records of the early explorers include the visit of Sir Martin Pring in 1603 to Piscataqua Harbor and settlement 20 years later under land grants to John Mason and Sir Fernando Gorges, when the district was known as the Province of Maine. In 1629 a grant of land was made to Mason of territory lying between the Piscataqua and the Merrimac River, which subsequently came to be called New Hampshire from the county of Hampshire in England. Settlements followed later at Little Harbor, Dover, Exeter, Portsmouth and other places.

In 1635, when John Mason died, the colony became unsettled and disturbed, when it was placed for protection, in 1641, under the colony of Massachusetts. A royal decree revived the separate colony of New Hampshire in 1680 under a grandson of Mason, and shortly after the colony was erected into a royal province, which it remained until the era of the Revolution, though without charter, the region being under the joint governor of Massachusetts and New Hampshire. Then followed disputes with Massachusetts as to boundaries, together with trouble with the Indians, the state meanwhile taking active part in the Revolutionary War.

Conventions succeeded conventions in the effort to secure a constitution, which the state ultimately received in 1792. In 1788 New Hampshire took part in ratifying the Federal constitution and in creating the Union. For a time Portsmouth was its capital, and then the capital became migratory, subsequently settling in Concord. For its industries see the works by McClistock, by Sanborn and by Barstow. Population 430,572.

Surface and Climate. The state is mountainous in parts, the White Mountains in the east-central region, being the most conspicuous and well-known elevations, soared over by Mt. Washington, with an altitude of 6,293 feet. Other elevated peaks occur in the northern and southwestern parts of the state; in the latter are Mt. Monadnock (3,186 feet) and Mt. Kearsarge (2,943 feet); while traversing the state lengthwise is the extreme eastern extension of the Appalachian chain. The drainage is effected by the Connecticut, Merrimac, Androscoggin, Saco, Pemigewasset, Winnepesaukee and Piscataqua Rivers; the chief lakes being Winnepesaukee, Umbagog, Squam, Sunapee and New-Found Lakes. The state has a humid climate, with an abundant rainfall, especially in the mountain regions; while the winters are usually long and severe, save in the delightful and healthy valleys, economically useful for agricultural operations and desirable as residential districts.

Natural Resources. The state is interesting to the geologist, and, though denuded of its original forest, is rich in granite quarries and has considerable mica deposits. The rivers, moreover, furnish an abundant waterpower, taken advantage of by the manufacturing establishments; while wood-pulp in quantities is still available, derived chiefly from the new growth of timber. New Hampshire has a narrow sea-front, but sufficient, with its interior rivers and lakes, to give it some fishery interests — the principal catch embracing cod, mackerel, haddock, lobster and clams. The value, annually, of the timber and lumber products is to-day about 10 million dollars.

Agriculture and Stockraising. The area available for farming is comparatively limited. The region of the chief farms is the coast and the interior valleys, a total area of not more than 3,250,000 acres, and that utilized chiefly for garden products and fruit (especially apple) cultivation. The yield of hay is considerable, as are the forage crops; while much attention is given to dairying and to raising cattle, sheep, swine and horses.

Manufactures. The growth of these has been phenomenal, as one may realize by a visit to such centers of industry as Manchester, Nashua, Dover, Concord, Laconia, Keene and Portsmouth, one or other of these towns being the seat of establishments which turn out cotton goods, woolens, hosiery and knitted goods, boots and shoes, not to speak of the tanning trade, flour and grist mill output, foundry, machine, lumber, timber and paper products and the factory products of cheese, butter and condensed milk. The manufacturing establishments exceed 1,900, with an aggregate capital of about 140 million dollars and a yield of products of $164,581,000 yearly, produced by 78,658 wage-earners. In the last year the yield of cotton goods was in value close upon 34 million dollars; of boots and shoes 39½ millions; of woolen goods 16 millions; of hosiery and knit goods 5 millions; of paper products and wood pulp 14 millions; of foundry and machine shop products 5 millions; and of lumber and timber products 15 millions, with 2½ millions as the value of wood-packing boxes.

Commerce, Finance and Transportation. The railway mileage in 1909 was 1,192 miles, consolidated in the hands of the Boston and Maine Railroad and of the Canadian line of the Grand Trunk. The banking business is handled by 57 national, nine state and 60 savings banks, with a total capital of six millions, and combined deposits close upon 75 millions. The net debt in 1909 was under $800,000, with an assessed valuation of property of 225 millions.

Education. There are 2,096 elementary schools with a school population of 75,385 in 1910, an enrolled attendance of 54,966 and an average attendance of 50,101. Besides these there were 65 high schools with 278 teachers and 6,136 pupils. The school expenditure for the year amounted to 1,619,505. Higher education is represented by Dartmouth College, at Hanover (q. v.), a nonsectarian institution having 118 instructors and 1,229 students; St. Anselm's College (R. C.) at Manchester with 17 instructors and 135 students; the state normal school at Plymouth (for teachers); New Hampshire College of Agriculture and Mechanic Arts at Durham, besides academies juid private schools for boys at Exeter and Concord and asylums and charitable organizations for the indigent and afflicted.

There are no works available for the New Hampshire collection.