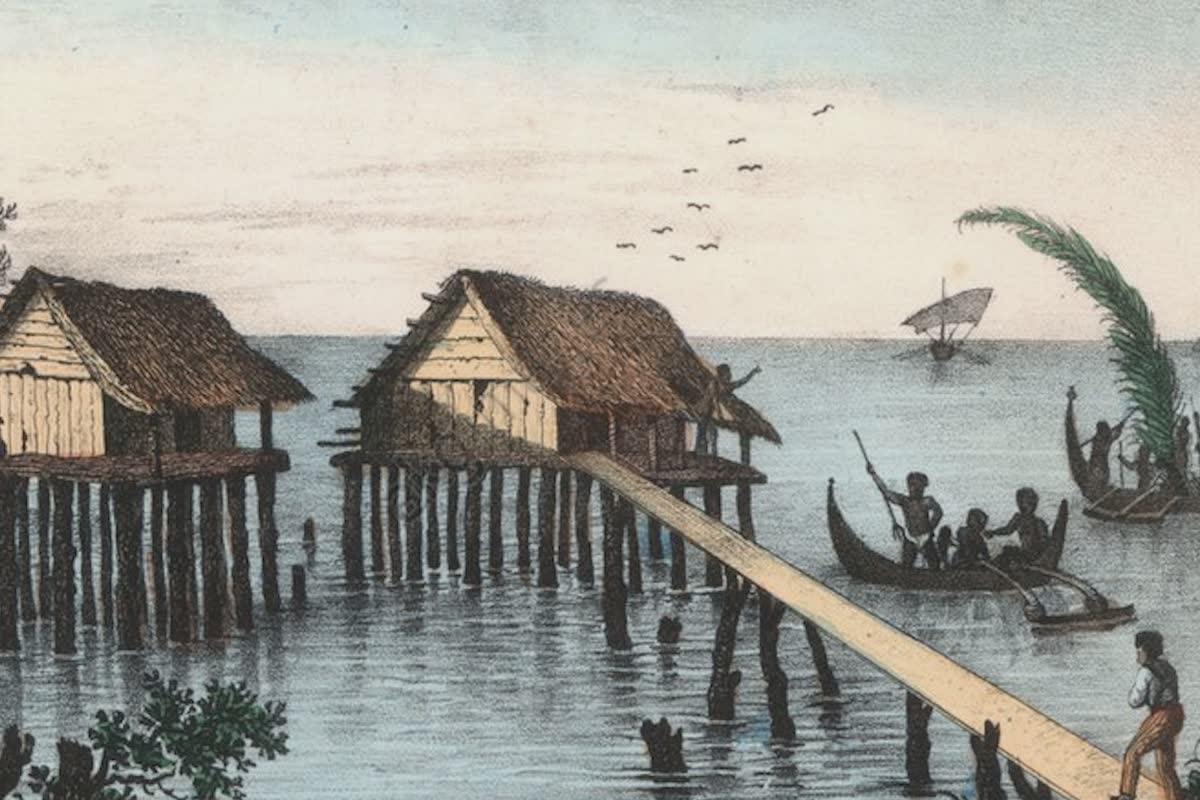 New Guinea or Papua is the second largest island in the world, lies 80 miles northeast of Queensland, Australia, at the southwest of the Pacific Ocean. Its length is 1490 miles, its greatest breadth 410, its estimated area over 312,000 square miles. Its population in the early 1900s is estimated as 560,000.

It was first discovered for Europeans by Abreu of Portugal in 1501, and has been visited repeatedly ever since. Naturalists were the first to explore the interior, Wallace being the pioneer in 1858, and doing world-famous work. Missionaries came next, and five Protestant and Roman Catholic societies are in the field.

The Dutch were the first to colonize (1827), the Germans proclaimed a protectorate in 1884, and Great Britain, inspired by anxious Australia, made annexations in 1885. Dutch New Guinea is the part of the island west of 141° E. long, and covers 151,789 square miles, and perhaps has 200,000 native inhabitants. German New Guinea or Kaiser Wilhelm's Land is the northern half of the eastern region, containing 70,000 square miles and having 15,232 natives.

British New Guinea or the Territory of Papua consisted of the southeastern portion of the island, with an area of 90,540 square miles and a population of 350,000 natives. The Australian commonwealth took control in 1901. The Dutch have done little for their territory; but the Germans are developing theirs through a company, though the imperial government administers public affairs; and the Australians have reduced many districts of the Territory of Papua to order and made tribes in large areas settle down to industry.

New Guinea is irregular in shape, consisting of a broad center from which a narrow peninsula runs southeastward and another to the northwest. The coasts are mostly lofty, but parts of the western shore are marshy flats covered with dense forests. The outline is broken by many indentations, but good harbors are rare. Mountain-ranges traverse the island, Mt. Owen Stanley in the southeast rising 13,205 feet, while in the northwest there are heights of over 20,000 feet, covered with perpetual snow, and active volcanoes.

There are four or five large rivers. The animals, except a native pig and native mice, are marsupials and monotremes. Birds abound in amazing profusion and variety. The forests are filled with enormous trees, including the camphor. Bananas, cocoanuts, maize, rice, sago, sugarcane and yams are cultivated. The chief exports are coffee, copra, gold, pearls and pearl-shells, sandalwood and trepang. The bulk of the natives are Papuans, who are not unlike the Negroes of African Guinea, but Malay settlements are numerous on the western coast. The Papuans mainly are at a low stage of culture. Some are fierce and untractable, others friendly in disposition.