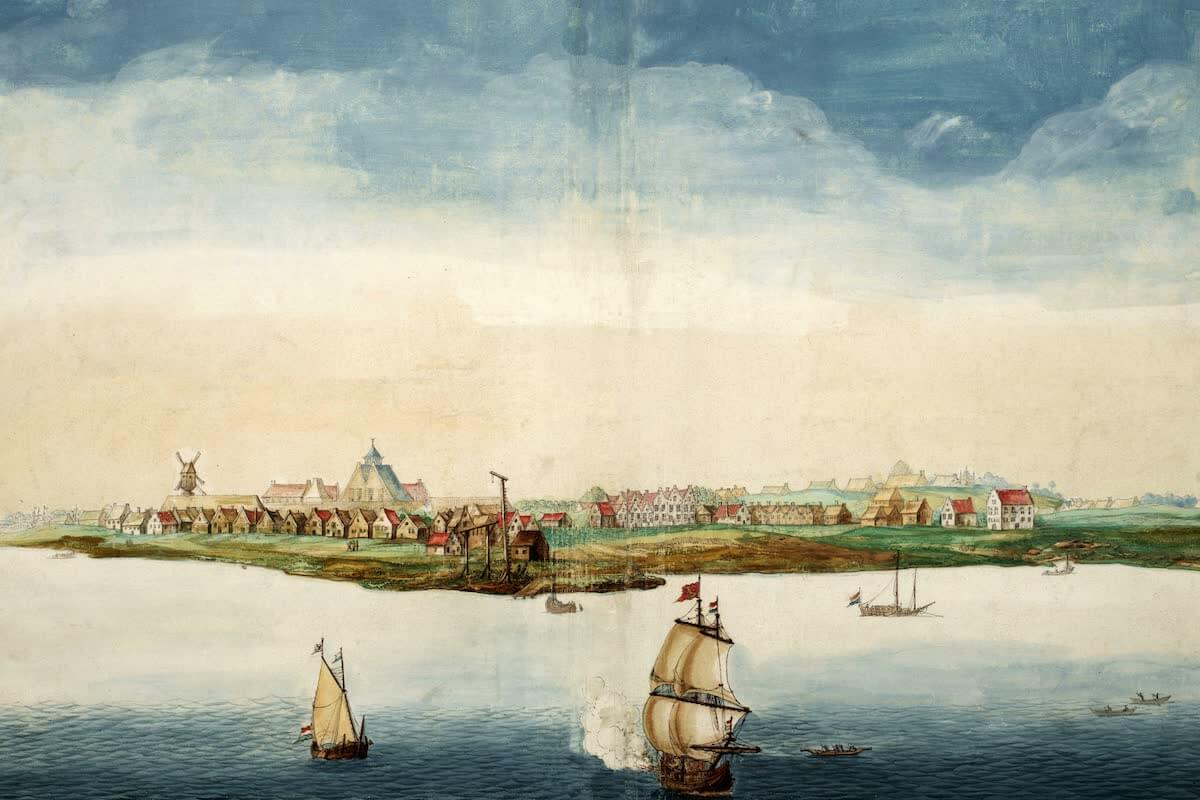 The discovery of New York Bay and the Hudson river by Verrazano in 1524 was followed only by occasional visits of trading or exploring vessels until the arrival of Henry Hudson in 1609. Beginning with 1610, Dutch merchants despatched several vessels to engage in the fur trade with the Indians, and in 1614 a ship commander, Adriaen Block, having lost his vessel, built the “Onrust” or “Restless” on the shore of Upper New York Bay.

About the same time a few huts were built at the south end of Manhattan Island. When New Netherland had been erected (1623) into a province of the West India Company (see New York), that body chose the south end of Manhattan Island for a trans-Atlantic shipping station and for the seat of government. In 1626 Peter Minuit, the director-general of the province, bought the entire island from the Indians for goods valued at 60 guilders (about $24) and at what was then its southern extremity began the erection of Fort Amsterdam; and at the close of the year the settlement, New Amsterdam, comprised thirty bark-covered dwellings.

For several years it was maintained wholly in the interest of the Company, and to none of the inhabitants, all of whom were its agents or employees, were given any political rights, title to land or right to European trade on his own account. The company divided a large portion of the island into six farms of its own, and when by its Charter of Privileges and Exemption (1629) it attempted to encourage agriculture in other parts of the province (see New York State) it reserved to itself the whole island.

In 1633 New Amsterdam received a grant of “staple right” by which it could compel any vessel passing the port either to offer its cargo for sale or pay a duty; in 1638 the Company extended to all friendly European countries the privilege of trading with the province, and about this time it opened town lots for sale. The town rapidly assumed the cosmopolitan character for which it has ever since been noted, there being, according to a contemporary report, eighteen languages spoken by its 400 or 500 inhabitants in 1643.

In 1641, to gain the necessary support to fight the Indians, Kieft had to yield to the demand for a popular voice in the government, and permitted the heads of families to choose a board of Twelve Men to confer with him. In 1643 he permitted the choice of a board of Eight Men, and when he refused its demands it was largely instrumental in effecting his recall. Under his successor, Peter Stuyvesant, a board of Nine Men was chosen, and this body, objecting to the customs duties which he imposed, sent three of its number with a petition to the States-General with the result that in 1653 New Amsterdam was made a city with a government administered by a schout, two burgomasters and five schepens.

Only burghers and employees of the West India Company could engage in commerce, work at a trade or practise a profession, and only great burghers could hold the more important offices. Originally Stuyvesant appointed the city officers, but in 1658 he permitted them to nominate their own successors. Besides engaging in the fur trade, the city was now exporting considerable timber and food-stuffs; in the coast trade it was beginning to reap the advantages of its situation on the coast route through Long Island Sound; and its trade with the Dutch West Indies was of some importance. But the city and the Company were always at odds.

The duties exacted by the Company were a heavy burden and yet the Company did not keep the fort in good repair. Stuyvesant’s arbitrary rule primarily in the interests of the Company was another grievance, and when in August 1664 there appeared in the harbour an English fleet sent by the duke of York for the conquest of the province, the city was in a defenceless condition. Richard Nicolls, the representative of the duke, easily won over the burgomasters and other prominent citizens; Stuyvesant, practically deserted, was driven to a formal surrender on the 8th of September; and New Amsterdam became New York.

In June 1665 Nicolls reorganized the government, vesting it in a mayor, aldermen and sheriff, to be appointed by the governor of the province for a term of one year; and extended the city’s limits to include the whole of Manhattan Island. In 1666 he granted to New Harlem, founded in 1658, a charter which gave to it the status of a town within the city. Nicolls’ successor, Governor Francis Lovelace, established a post-route from New York to Boston in 1673. On the 30th of July 1673 the city was surprised and captured by a Dutch fleet under Cornelis Evertsen and Jacob Binckes.

The captors renamed the city New Amsterdam and in January 1674 Anthony Colve, the newly appointed governor of the province, re-established the Dutch city government, but under the treaty of Westminster the English again took possession in November. In 1678 Governor Edmund Andros gave the city practically a monopoly within the province of commerce “over seas” and ordered that flour should be inspected nowhere else; two years later he required that all flour for export should be bolted and packed within the city.

The duties established by order of the duke of York were still a grievance, and when, in 1681, Governor Andros had sailed for England without renewing the ordinance imposing them, the merchants refused payment and demanded that they should thereafter be imposed by a representative assembly. The duke yielded and the first New York Assembly, called by Governor Thomas Dongan, met in the city on the 17th of October 1683. Less than three years later, on the 20th of April 1686, Dongan gave the city its first real charter, which is a historic instrument in the city government; it was superseded only to a very small extent as late as 1830 (when there was a revision of the charter) and on it as a basis the later charters have been framed.

There are no works available for the New Amsterdam collection.