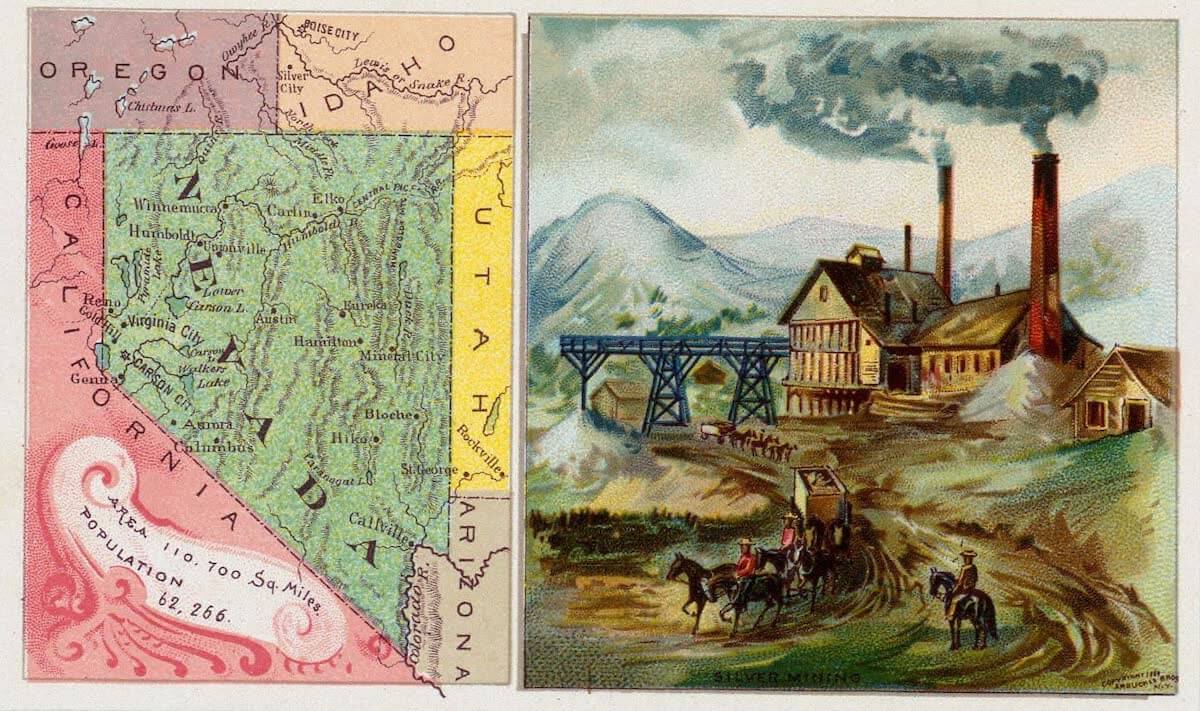 Nevada, one of the Pacific states of the United States, lies between Idaho and Oregon on the north, Utah and Arizona on the east and California on the south and west. It is 500 miles long and 300 wide between its farthest points. Although the sixth largest of the states and territories, it has the smallest population—81,875 in 1910. Its land surface has an area of 110,700 square miles, that is, almost twice that of Illinois.

The state was separated from Utah in 1861, and admitted as a state in 1864. The first white men to visit it were the Franciscan friars in 1775. In 1825 Peter Ogden of the Hudson Bay Company came to Humboldt River, Fremont went through the state in 1843–5, and in 1849 a trading-post was established on the Carson River by the Mormons.

The principal cities are Carson City, the capital (Pop. 2,466), Virginia City, Reno, Gold Hill, Goldfield, Rawhide and Toriopah. About 5,216 Indians are still on the reservations in the state. Nevada has about 1,000 miles of railroad. The Southern (formerly Central) Pacific connects it with Salt Lake City and San Francisco, the San Pedro with Los Angeles, and there are other important railroads traversing the state.

Surface and Drainage. The largest part of the state is included in the Great Basin or what at one time was the bed of a large inland sea. This part is dry and barren, with the exception of the regions immediately around Walker, Humboldt, Carson, Pyramid, Tahoe and other lakes, and is traversed by high mountains. The mean elevation is about 4,000 feet. Wheeler Peak, the highest point in the state, has an altitude of 13,058 feet. Of the lakes Pyramid is the largest, being 35 miles long and ten wide, and Lake Tahoe has an altitude of 6,225 feet, is 21 miles long, and is an objective point for many tourists. The principal river is the Humboldt, which rises in the northeast and flows into Humboldt Lake; it is about 375 miles long.

Climate and Agriculture. The dry atmosphere is clear in winter, but in summer is filled with small particles of alkaline dust. The rainfall is exceedingly light, therefore the vegetation is very scanty though hardy. The soil, however, has proven fertile wherever irrigation has taken place, and the results have been surprising. The national government’s Truckee-Carson system irrigates 160,000 acres. (See Irrigation). Barley, oats, spring wheat, potatoes and vegetables are grown, as well as pears, applies and cherries in the cultivated sections. Stockraising is quite an extensive industry, for the hay-crop, the abundance of prairie-grass and the white sage-brush furnish food-stuffs for the entire year. Angora and Kashmir goats are raised to some extent.

Natural Resources. Fir, spruce and pine grow to a great size; mountain mahogany is found on the foothills; so are willow, beech, cottonwood, wild cherry and dwarf cedar. Among the building-stones are marble, granite, limestone, sandstone and agate. Amethyst, tourmalines and carnelians have been found. There are deposits of sulphur, gypsum, salt, borax, lead, copper, nickel, antimony, coal and mercury, but the gold and silver deposits lead all minerals. The famous Comstock Lode, discovered in 1859, produced $306,000,000 during its first twenty years. Of recent years the discovery and operation of new goldmines at Goldfield, Tonopah, Rawhide and other places have given new impetus to mining. The output of gold in 1910 was $18,873,700 and of silver $6,677,600.

Industries. The leading industries are mining and smelting, but the manufacturing interests include flour and grist mills, railroad-cars, wagons, carriages, dairy-products, boots, shoes, salt and other articles.

Education. The public schools are supported by state and local taxes; high schools as well as grammar schools are maintained in the larger towns; and education is compulsory. An Indian school is maintained by the Federal government at Carson City. The University of Nevada is at Reno, and in connection with this school the government has established an agricultural experiment-station. The state Orphans’ Home is at Carson; a hospital for the weak-minded, at Reno, a state penitentiary at Carson and also a government mint.

There are no works available for the Nevada collection.