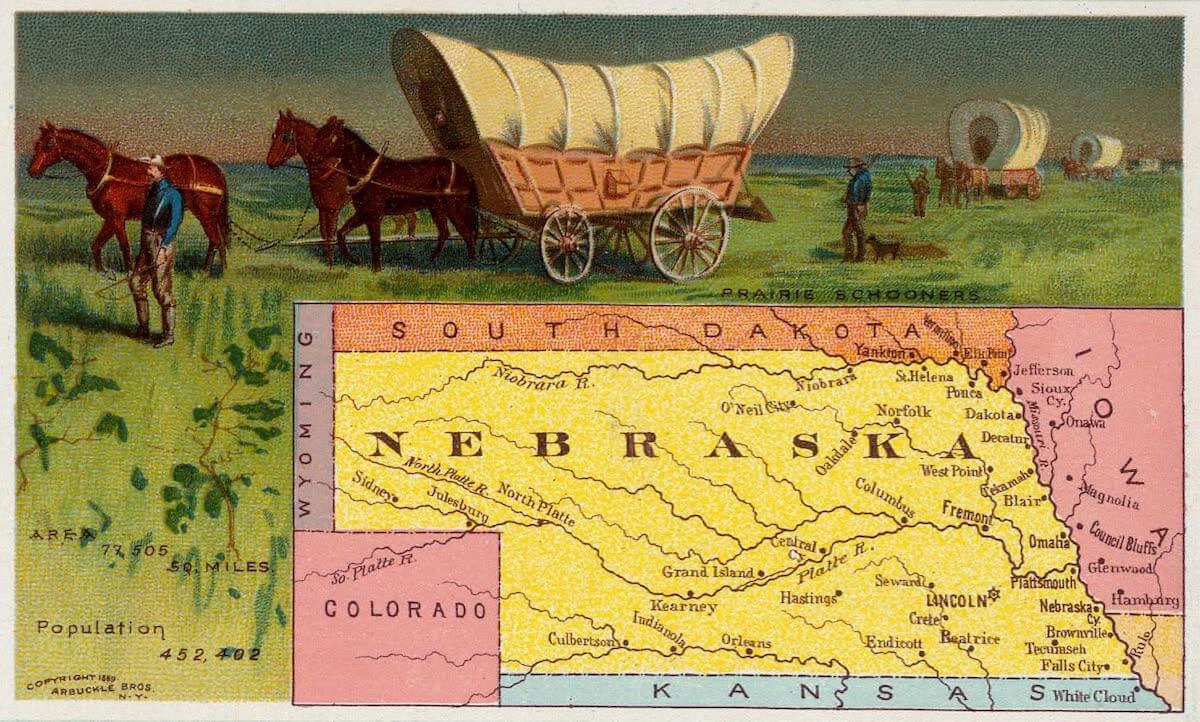 Originally the present state, which dates from 1867, formed part of the Louisiana Purchase, and in 1804 it was organized as the District and Territory of Louisiana, eight years later becoming known as Missouri Territory. In the 18th century fur-traders ascended the Platte; in 1804–06 the Lewis and Clark expedition visited the region; and later commerce was begun by fur-traders with the Indians and a settlement was formed in 1805 at Bellevue.

In 1821 Fort Atkinson was built, and in 1825–26 Omaha and Nebraska were settled. During 1840—50 the district was visited by Mormons, traders and travellers, as well as by American troops on their way to New Mexico and by gold-seekers in 1849–50 en route for California. It remained unorganized, however, until 1854, when it became a territory under the provisions of the Kansas-Nebraska bill, and after various vicissitudes it was admitted as a state, its area being limited by giving portions of it to form Colorado, Idaho and Dakota, and a constitution was formulated in 1866.

Surface and Climate. The state, which is a prairie one, is without any great eleavtions, though in the north and west the surface is diversified by hills. Its chief waterways are the Platte or Nebraska River, which courses across the state from west to east, and the Missouri River, which flanks it on the east and forms part of its northeastern boundary. The soil is rich and fertile, with a dry climate, the rainfall being light; so much so as to necessitate the resort to irrigation in the western part of the state. In the absence of humidity there is little extreme of either heat or cold.

Natural Resources. The state is preeminently an agricultural one, raising the chief cereals, including corn, wheat, oats, rye and barley, besides hay and potatoes. The farmland area is about 39,000,000 acres, the acreage in 1909 in the following crops being corn, 7,266,000 acres; wheat, 2,662,000 acres; oats, 2,365,000 acres; hay and forage, 4,520,000 acres. There is now considerable stock-raising, with an increasing number of dairy-cows and other cattle, horses, sheep and swine. The mineral deposits are poor or are as yet undeveloped, except such limestone as is quarried for building purposes, brick and tile product and clay. Fruit-growing is being developed.

Manufactures. The lack of fuel, either of coal or timber, has been a drawback to manufacturing. The leading industry is slaughtering and meat-packing, with a product value, in 1909, of close upon $93,000,000. South Omaha is the chief seat of this industry. The manufacture of malt liquors, cheese, butter, condensed milk and flour and grist-mill product is important, as is the yield from the brick and tile works, lumber and planing mills, railroad cars, saddlery and harness shops. There is, moreover, a large and growing printing and publishing trade.

Commerce and Transportation. Nebraska has 175 national banks, with a capital of about $12,000,000 and about $65,000,000 of deposits. There are 6,067 miles of railway, chiefly in the southeast. The chief lines are the Chicago and Northwestern, Rock Island, Union Pacific, Burlington and Missouri River and Fremont, Elkhorn and Missouri Valley roads.

Education and Charities. Educationally the state makes a good showing, though it has no state board of education, for it has an exceedingly low percentage of illiterates. In 1910 there was a total school enrolment of 278,936, with an average daily attendance of 192,454 pupils and 11,099 teachers. Of high schools there were 285, with an aggregate attendance of 18,000. The expenditure on the schools was $7,454,215, over $4,560,000 being for teachers’ salaries. The institutions for higher learning include the University of Nebraska, at Lincoln, with 262 instructors and 3,992 students; Cotner University, at Bethany, with 50 instructors and 350 students; Bellevue College (Presbyterian with 16 instructors and 170 students; Doane College (Congregational), at Crete, with 19 instructors and 210 students; and Nebraska Wesley an University, at University Place, with 43 instructors and 937 students. Besides these collegiate institutions the state maintains asylums for the insane, feebleminded etc. at Lincoln, Norfolk, Hastings and Beatrice; an institute for the blind at Nebraska City; one for the deaf and dumb at Omaha; besides state soldiers’ and sailors’ homes at Milford and Grand Island.

There are no works available for the Nebraska collection.