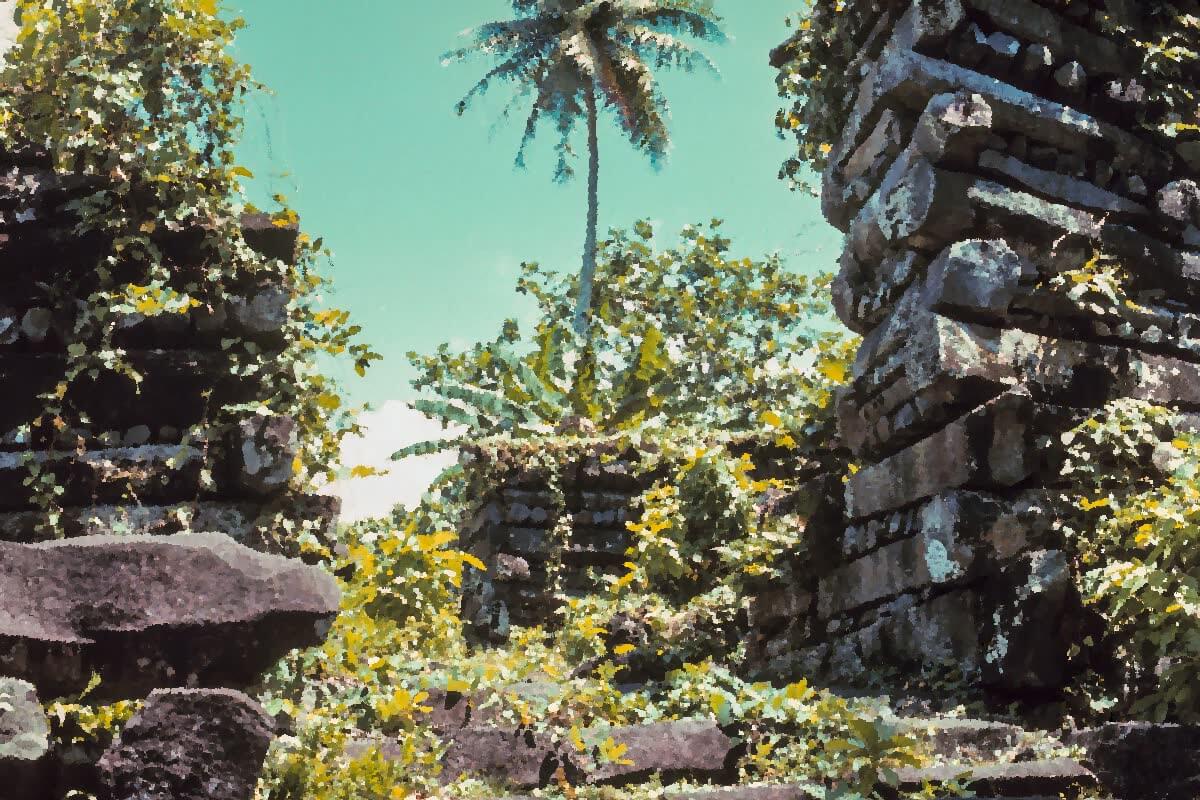 Few historic places in the Pacific are as intriguing as Nan Madol. The city ruins are on a coral reef in a lagoon on the tiny island of Temwen, adjacent to the eastern shore of the island of Pohnpei in the Federated States of Micronesia. Before its abandonment, Nan Madol was a major political and spiritual hub for native Pohnpeians. Throughout its 500 year life, from 1200 and 1700, the city served as a religious center, a royal enclave, a fortress, an urban marketplace, and the high seat of government for the island of Pohnpei. Relatively unknown outside of Micronesia, the city of Nan Madol is a hidden gem of Micronesian history and culture and a grand sight for modern visitors.

During its height, Nan Madol was the seat of the Saudeleur dynasty which united all of Pohnpei's estimated 25,000 people. The Saudeleur were originally a foreign tribe who came to Pohnpei and installed themselves as rulers of the island. The Saudeleur first appeared around the year 1100 and built Nan Madol around 1200. According to Pohnpeian oral history, the first Saudeleur to arrive on Pohnpei were two brothers, Olisihpa and Olosohpa, canoe-faring sorcerers who received their powers from the gods and used their magic to build Nan Madol. This so impressed the native Pohnpeians that they invited the Saudeleur to marry into their tribe. When one of the brothers eventually died, the other declared himself king. The Saudeleur built Nan Madol as a temple for the farm god Nahnisohn Sapw, the god worshipped by the Saudeleur nobility.

Nan Madol became the most important political and religious center on the island. The social system at Nan Madol is the earliest known example of such centralized political power in the western Pacific. The largest homes belonged to the chiefly elite and archeological excavations have revealed objects that mark their owners' status in society. The city was built so that the nobility were isolated from the general population. At its peak, Nan Madol may have been home to a thousand people, the majority of whom were commoners serving the nobility.

Nan Madol was a sacred site filled with altars, oracles, and temples. Many Saudeleur were priests, and this heavy concentration of religious leaders led to the development of numerous cults. According to oral history, later generations of Saudeleur aristocrats became increasingly oppressive, often forcing the native Pohnpeians into starvation.

In 1628, the warrior hero Isokelekel led an invasion of Pohnpei and defeated the Saudeleur tribe. Pohnpeian oral history says that Isokelekel was a demigod and the vengeful son of the Pohnpeian storm god Nahn Sapwe, who had grown unhappy with the tyranny of Nahnisohn Sapw and the Saudeleur. Historians believe that Isokelekel was the leader of a band of Micronesian settlers from the nearby island of Kosrae. Isokelekel led his war band of warriors, women, and children to victory with the assistance of the oppressed Pohnpeian populace. With the defeat of the Sandaleur, Nan Madol's significance to Pohnpeians slowly eroded and it was eventually abandoned in the 18th century.

Nan Madol is the only extant ancient city built on top of a coral reef. Constructed in a lagoon and surrounded by water on three sides with a stone wall enclosing the complex, the city is often referred to as the "Venice of the Pacific." Nan Madol roughly translates to "within the intervals" referring to the elaborate web of tidal canals and waterways which crisscross the city, allowing transportation between over 90 small artificial islets. Because of its construction, Nan Madol appears to float on the water. Carved basalt stones carefully placed on top of each other in a crisscross pattern formed the walls of each of the 130 buildings. Some individual stones are light enough that a single person could carry them, while the heaviest of the basalt pillars weigh 100,000 pounds each. The buildings stand on a foundation of natural coral that lies just below the water's surface. The largest structure is the Nandauwas, a royal temple surrounded by 25-foot high walls. The Pohnpeians, who had neither binding agents like concrete nor modern diving equipment, sank the heavy stones into the lagoon using an unknown method. The building remains and canals are stable enough that even after centuries of abandonment visitors can still tour Nan Madol by boat. The entire complex is a fitting tribute to the sophisticated methods of its Pohnpeian builders. The scale and superiority of its stone architecture, its artificial islet construction, and the modification of the shoreline contribute to the significance of the site.