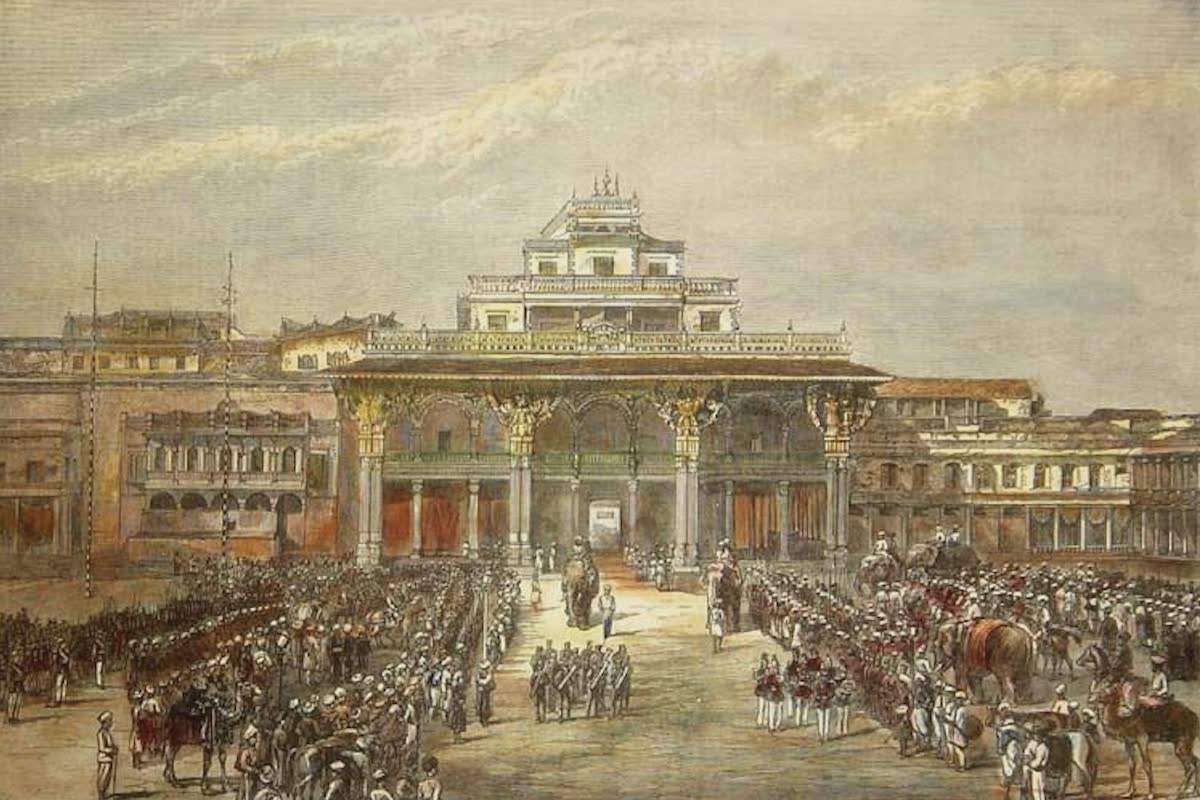 Mysore is a historical kingdom and city located in southern India in the foothills of the Chamundi Hills. The city served as the capital of the Kingdom of Mysore for nearly six centuries from 1399 until 1956.

The Kingdom was ruled by the Wadiyar dynasty, with a brief period of interregnum in the 1760s and 70s when Hyder Ali and Tipu Sultan were in power. The Wadiyars were patrons of art and culture and contributed significantly to the cultural and economic growth of the city and the state.

Mysore is known as the City of Palaces because of several ornate examples spread throughout the city. Among the most notable are Amba Vilas, popularly known as Mysore Palace; Jaganmohana Palace, which also serves as an art gallery; Rajendra Vilas, also known as the summer palace; Lalitha Mahal, which has been converted into a hotel; and Jayalakshmi Vilas. The main palace of Mysore burned down in 1897, and the present-day structure was built on the same site.

Geographically, Mysore is located between 12° 18' 26" North Latitude and 76° 38' 59" East Longitude. It is located at an altitude of 2,427 ft (739.75 m) around 145.2 km (90 mi) towards the southwest of Bangalore. The city is located between two rivers: the Kaveri River that flows through the north of the city and the Kabini River, a tributary of the Kaveri, that lies to the south. Mysore also has several lakes, such as the Kukkarahalli, the Karanji, and the Lingambudhi lakes.

The drainage of the country, with a slight exception, finds its way into the Bay of Bengal, and is divisible into three great river systems that of the Kistna on the north, the Cauvery on the south, and the Northern and Southern Pennar and Palar on the east. Owing to either rocky or shallow beds none of the Mysore rivers is navigable, but some are utilized for floating down timber at certain seasons.

The main streams, especially the Cauvery and its tributaries, support an extensive system of irrigation by means of channels drawn from immense dams (anicuts), which retain the water at a high level and permit only the overflow to pass down stream. The streams which gather from the hill-sides and fertilize the valleys are embanked at every favourable point in such a manner as to form a series of reservoirs or tanks, the outflow from one at a higher level supplying the next lower, and so on, all down the course of the stream at short intervals. These tanks, varying in size from small ponds to extensive lakes, are dispersed throughout the country to the number of 20,000; the largest is the Sulekere lake, 40 m. in circumference.

In the earliest historical times the northern part of Mysore was held by the Kadamba dynasty, whose capital, Banawasi, is mentioned by Ptolemy; they reigned with more or less splendour during fourteen centuries, though latterly they became feudatories of the Chalukyas. The Cheras were contemporary with the Kadambas, and governed the southern part of Mysore till they were subverted by the Cholas in the 8th century. Another ancient race, the Pallavas, held a small portion of the eastern side of Mysore, but were overcome by the Chalukyas in the 7th century.

These were overthrown in the 12th century by the Ballalas (Hoysalas), an enterprising and warlike race professing the Jain faith. They ruled over the greater part of Mysore, and portions of the modern districts of Coimbatore, Salem and Dharwar, with their capital at Dwarasamudra (the modern Halebid); but in 1310 the Ballala king was captured by Malik Kafur, the general of Ala-ud-din; and seventeen years later the town was entirely destroyed by another force sent by Mahommed Tughlak. After the subversion of the Ballala dynasty, a new and powerful Hindu sovereignty arose at Vijayanagar on the Tungabhadra. In 1565 a confederation of the Mahommedan kingdoms defeated the Vijayanagar sovereign at the battle of Talikota; and his descendants ultimately became extinct as a ruling house.

During the feeble reign of the last king, the petty local chiefs (palegars) asserted their independence. The most important of these was the wedeyar of Mysore, who in 1610 seized the fort of Seringapatam, and so laid the foundation of the present state. His fourth successor, Chikka Deva Raja, during a reign of 34 years, made his kingdom one of the most powerful in southern India. In the middle of the 18th century the famous Mahommedan adventurer Hyder Ali usurped the throne, and by his military prowess made himself one of the most powerful princes of India. His dynasty, however, was as brief as it was brilliant, and ended with the defeat and death of his son Tippoo at Seringapatam in 1799.

A representative of the ancient Hindu line was then replaced on the throne. This prince, Krishnaraja Wodeyar, was only five years old, and until he came of age in 1811 the state was under the administration of Purnaiya, the Brahman minister of Hyder and Tippoo. When Krishnaraja took over the management of his state he received an orderly and contented principality with a surplus of two crores of rupees. Within twenty years he had driven his subjects into rebellion and involved himself and his state in heavy debt.

The British government therefore assumed the administration in 1831, and placed it in the hands of commissioners. In 1862 no less than 88 lakhs of state debts and of the maharajahs own liabilities had been liquidated; the entire administration had been reformed, a revised system of land revenue introduced, and many public works executed. The maharaja therefore pressed his claims to a restoration of his powers, but the British government refused the application as incompatible with the true interests of the people of Mysore, and as, not justified by any treaty obligation. In the same year Chamarajendra Wodeyar, afterwards maharaja, was born of the Bettada Kote branch of the ruling house; and in June 1865 Maharaja Krishnaraja adopted him as his son and successor, although he had been informed that no adoption could be recognized except to his own private property, already once more heavily weighted with private debts.

In 1867 the policy of government underwent a change; it was determined to secure the continuance of native rule in Mysore, by acknowledging the adoption upon certain conditions which would secure to the people the continued benefits of good administration enjoyed by them under British control. The old maharaja died on the 27th of March 1868, and Chamarajendra Wodeyar was publicly installed as the future ruler of Mysore on the 23rd of September 1868. His education was taken in hand, abuses which had grown up in the palace establishment were reformed, the late maharaja's debts were again paid off, and the whole internal administration perfected in every branch during the minority.

On the 25th of March 1881 Maharaja Chamarajendra, having attained the age of 18 years, was publicly entrusted with the administration of the state. He made over to the British government, with full jurisdiction, a small tract of land at Bangalore, forming the "civil and military station," and received in return the island of Seringapatam. But the most important incident of the change was the signing of the "instrument of transfer," by which the young maharaja, for himself and his successors, undertook to perform the conditions imposed upon him. To that agreement the maharaja steadfastly adhered during his reign, and the instrument is a landmark in the history of British relations with the protected states of India.

The maharaja's first minister was Ranga Charlu, who had been trained in the British administration of Mysore. He signalized the restoration of native rule by creating the representative assembly. In 1883 Sheshadri Aiyar succeeded Ranga Charlu, and to him Mysore is indebted for the extension of railways and schemes of irrigation, the development of the Kolar goldfields, and the maintenance of the high standard of its administration. The maharaja died at Calcutta on the 28th of December 1894. His eldest son, Krishnaraja Wodeyar, born in 1884, succeeded him, and his widow, Maharani Vanivilas, was appointed regent, until in 1902 the maharaja was formally invested with full powers by the viceroy in person.

When the British took over Mysore after the Anglo-Mysore Wars the area was designed a state of southern India, almost surrounded by the Madras presidency, but in political relations with the governor-general. It is naturally divided into two regions of distinct character-the hill country called the Malnad, on the west, and the more open country known as the Maidan, comprising the greater part of the state, where the wide-spreading valleys and plains are covered with villages and populous towns.

Bangalore is a strongly fortified town of Mysore, one of the native states in India, in a district of the same name. When Mysore was occupied by England in 1831, Bangalore was made the capital, and when, in 1881, Mysore was restored to the rule of its native prince, the district of Bangalore was exempted from native control. The city lies 3,000 feet above the sea, and is consequently very healthy. Silk and carpets are the principal manufactures. Population 189,485. The district of Bangalore has a population of 669,139.

Mysore was perhaps the most prosperous native state in India. Situated on a healthy plateau, it receives the benefit of both the south-west and north-east monsoons, a natural advantage which, in conjunction with its irrigation system, has brought to Mysore a larger degree of immunity from famine than almost any other internal tract of India (always excepting the great calamity of 1876-1877, when one-fourth of the population are believed to have perished). Coffee, sandal-wood, silk, gold and ivory are among the chief products.

The famous Kolar gold-fields are worked by electric power, which is conveyed for a distance of 92 m. from the Cauvery Falls. This was the first electric power scheme of magnitude in Asia. A long period of administration by British officers led to the introduction of a system based on British models, which has been maintained under a series of exceptionally able native ministers, and the state can boast of public works, hospitals, research laboratories, &c., unsurpassed in India.

The total area of the state is 29,433 sq. m., subdivided into 8 districts, namely: Bangalore, Kolar, Tumkur, Mysore, Hassan, Kadur, Shimoga and Chitaldrug. Pop. (1901), 5, 539,399, showing an increase of 18% between 1881 and 1891, and of 12% between 1891 and 1901. The proportion of Hindus (92.1%) is larger than in any province of India, showing how ineffectual was the persecution of Hyder and Tippoo. The Christians (apart from native converts, who are chiefly Roman Catholics) largely consist of the garrison at Bangalore, the families of military pensioners at the same town, coffee-planters and gold-miners.

The finances of the state have been very successfully managed under native rule, assisted by large profits from railways and gold-mines. The revenue amounts to about £1,400,000, of which nearly half is derived from land. In accordance with the "instrument of transfer," Mysore pays to the British government a tribute of £234,000, as contribution to military defence; but the full amount was not exacted until 1896. The state maintains a military force, consisting of two regiments of silladar cavalry and three battalions of infantry-total, about 2800 men; and also a regiment of imperial service lancers, with a transport corps.

An interesting political experiment has been made, in the constitution of a representative assembly, composed of 350 representatives of all classes of the community, who meet annually to hear an account of the state administration for the previous year. The assembly has no power to enact laws, to vote supplies, or to pass any resolution binding upon the executive. But it gives to the leading men of the districts a pleasant opportunity of visiting the capital, and to a limited extent brings the force of public opinion to bear upon the minister. Since 1891 this representative assembly has been elected by local boards and other public bodies.