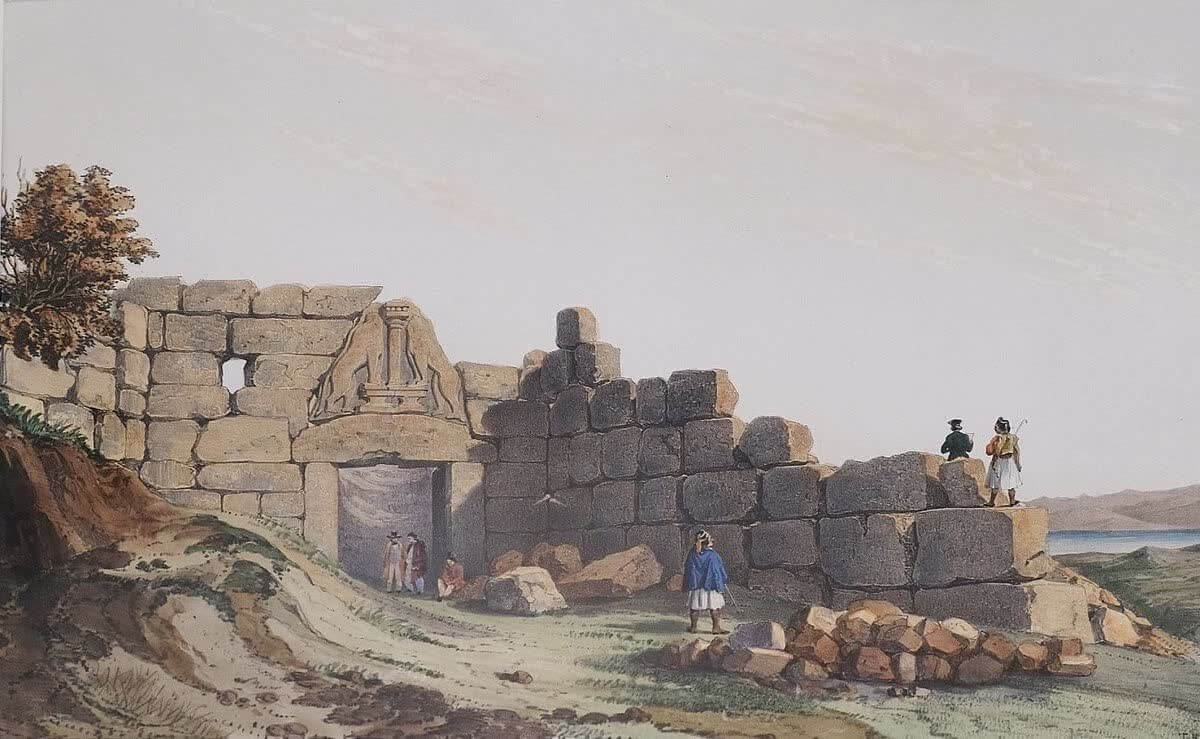 Mycenae was one of the most ancient cities of Greece, was situated on a hill above the northern extremity of the fertile Argive plain. Its situation is exceedingly strong, and it commands all the roads leading from Corinth and Achaea into the Argive plain.

The walls of Mycenae are the greatest monument that remains of the Heroic age in Greece; part of them is similar in style and doubtless contemporary in date with the walls of the neighbouring town Tiryns. There can therefore be little doubt that the two towns were the strongholds of a single race, Tiryns commanding the sea-coast and Mycenae the inner country.

Legend tells of the rivalry between the dynasties of the Pelopidae at Mycenae and of the Proetidae at Argos. In early historic times Argos had obtained the predominance. The Mycenaeans, who had temporarily regained their independence with the help of Sparta, fought on the Greek side at Plataea in 479 B.C. The long warfare between the two cities lasted till 468 B.C., when Mycenae was dismantled and its inhabitants dispersed. The city never revived; Strabo asserts that no trace of it remained in his time, but Pausanias describes the ruins. For the character of Mycenaean art and of the antiquities found at Mycenae see Aegean Civilization.

The extant remains of the town of Mycenae are spread over the hill between the village of Charvati and the Acropolis. They consist of some traces of town walls and of houses, and of an early bridge over the stream to the east, on the road leading to the Heraeum. The walls of the Acropolis are in the shape of an irregular triangle, and occupy a position of great natural strength between two valleys. They are preserved to a considerable height on all sides, except where the ravine is precipitous and they have been carried away by a landslip; they are for the most part built of irregular blocks of great size in the so-called "Cyclopian" style; but certain portions, notably that near the chief gate, are built in almost regular courses of squared stones; there are also some later repairs in polygonal masonry.

The main entrance is called the Lion Gate, from the famous triangular relief which fills the space above its massive lintel. This represents two lions confronted, resting their front legs on a low altar-like structure on which is a pillar which stands between them. The device is a translation into stone of a type not uncommon in gem-cutter's and goldsmith's work of the "Mycenaean" age.

The gate is approached by a road commanded on one side by the city wall, on the other by a projecting tower. There is also a postern gate on the north side of the wall, and at its eastern extremity are two apertures in the thickness of the wall. One of these leads out on to the rocks above the southern ravine, the other leads to a long staircase, completely concealed in the wall and the rocks, leading down to a subterranean well or spring. Just within the Lion Gate is a projection of the wall surrounding a curious circular enclosure, consisting of two concentric circles of thin slabs of stone set up on end, with others laid across the top of them; at the part of this enclosure nearest to the Lion Gate is an entrance. Some have supposed the circle of slabs to be the retaining wall of a tumulus; but its structure is not solid enough for such a purpose, and it can hardly be anything but a sacred enclosure.

It was within this circle that Dr H. Schliemann found the five graves that contained a marvellous wealth of gold ornaments and other objects; a sixth was subsequently found. Above one of the graves was a small circular altar, and there were also several sculptured slabs set up above them. The graves themselves were mere shafts sunk in the rock. Dr Schliemann identified them with the graves of Agamemnon, Cassandra, and their companions, which were shown to Pausanias within the walls; and there can be little doubt that they are the graves that gave rise to the tradition, though the historical identity of the persons actually buried in them is a more difficult question.

Outside the circle, especially to the south of it, numerous remains of houses of the Mycenaean age have been found, and others, terraced up at various levels, occupy almost the whole of the Acropolis. On the summit, approached by a well-preserved flight of steps, are the remains of a palace of the Mycenaean age, similar to that found at Tiryns, though not so complicated or extensive. Above them are the foundations of a Doric temple, probably dating from the last days of Mycenaean independence in the 5th century.

Numerous graves have been found in the slopes of the hills adjoining the town of Mycenae. Most of these consist merely of a chamber, usually square, excavated in the rock, and approached by a "dromos" or horizontal approach in the side of a hill. They are sometimes provided with doorways faced with stucco, and these have painted ornamentation. Many of these tombs have been opened, and their contents are in the Athens museum. Another and much more conspicuous kind of tomb is that known as the beehive tomb. There are eight of them at Mycenae itself, and others in the neighborhood. Some of them were visible in the time of Pausanias, who calls them the places where Atreus and his sons kept their treasures. There can, however, be no doubt that they were the tombs of princely families.

The largest and best preserved of them, now commonly called the Treasury of Atreus, is just outside the Lion Gate. It consists of a circular domed chamber, nearly 50 ft. in diameter and in height; a smaller square chamber opens out of it. It is approached by a horizontal avenue 20 ft. wide and 115 ft. long, with side walls of squared stone sloping up to a height of 45 ft. The doorway was flanked with columns of alabaster, with rich spiral ornament, now in the British Museum; and the rest of the façade was very richly decorated, as may be seen from Chipiez's fine restoration. The inside of the vault was ornamented with attached bronze ornaments, but not, as is sometimes stated, entirely lined with bronze. It is generally supposed that these tombs, as well as those excavated in the rock, belong to a later date than the shaft-tombs on the Acropolis.

There are no works available for the Mycenae collection.