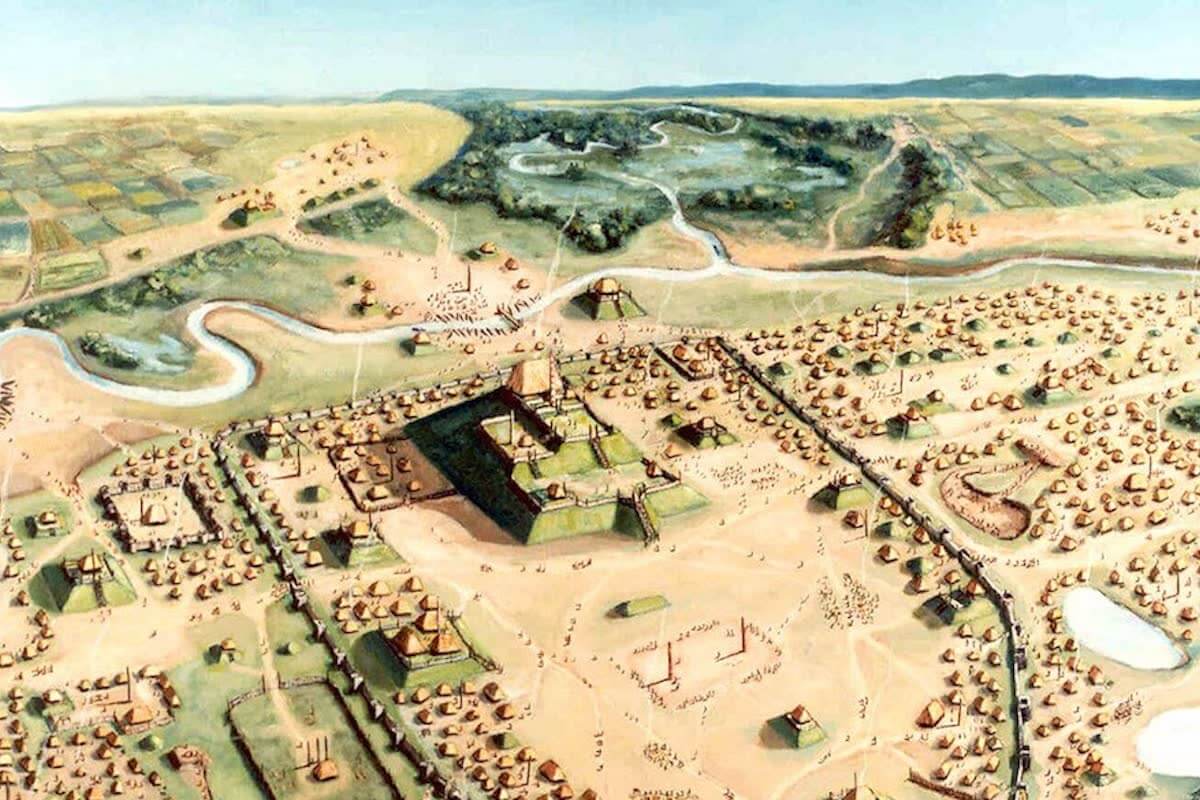 MOUND-BUILDERS, in North America, the name given to the prehistoric inhabitants who chiefly centred in the valleys of the Mississippi and Ohio, and who seem to have possessed a measure of civilization far in excess of that of the North American Indians when first met by the whites. The remarkable mounds, which have given occasion for the name, are fortified enclosures and tumuli of the most varied appearance, round, conical, or in the shape of animals.

They are scattered over an immense tract of country from the great lakes to the Gulf of Mexico, and from the Rockies to the Atlantic, but are specially frequent in the valley of the Mississippi, along its left tributaries, in Arkansas, Kansas and the basin of the Ohio. But the old theory that the mound-builders were a distinct race of highly civilized agriculturists, who had lived from remote antiquity in the regions of the mounds and were eventually exterminated by the nomadic hordes coming from the northward, represented to-day by the present Indians, is no longer supported by the principal American ethnologists, who hold that the Indians are their descendants.

In Ohio there are thousands of mounds, some in the form of circles, others four-sided, and in a few cases eight-sided. Sometimes a square and a circle are united. Altar-mounds, small rounded heaps of earth, are found in Ohio. At their centre is a basin-shaped mass of hard clay showing effects of fire. These basins are 3 or 4 ft. across, and contain ashes and charcoal. Upon these altars are found many objects.

The most famous mound in Ohio is the “Great-Serpent,” in Adams county. It lies upon a narrow ridge between three streams which unite. It is a gigantic serpent made in earth. Across the widely-opened jaws it measures 75 ft.; the body just behind the head measures 30 ft. across and is 5 ft. high; and, following the curves, the length is 1348 ft. The tail is in a triple coil. In front of the monster is an elliptical enclosure with a heap of stones at its centre. Beyond this is a form somewhat indistinct, thought by some to be a frog.

In Wisconsin the most interesting mounds are the effigy mounds — earthen forms of mammals, birds and reptiles — usually in groups and of gigantic size. Among them are buffalo, moose, elk, deer, fox, wolf, panther and lynx. Some panthers have tails 350 ft. long, and some eagles measure 1000 ft. from tip to tip of outspread wings. Occasionally the figures are cut or sunk in the earth, and near them are hundreds of simple burial mounds. It seems most probable that the purpose of these effigy mounds are totemic, and that they were objects of worship as guardians of the villages.

Further south in west Tennessee another class of mound is found. This contains graves made of slabs of stone set on edge. The simplest have six stones, two at the sides, two at the ends, one at the top and one at the bottom. Sometimes there is one of these graves in a mound, sometimes many. In one, 12 m. from Nashville, 45 ft. across and 12 ft. high, were found a hundred skeletons, mostly in stone graves ranged one above the other. The skeletons in the upper graves had been buried stretched at full length. The lower graves were short and square, and the bones in them had been cleaned and piled in little heaps.

The mound-builders were Stone-Age men, and made many beautiful objects of stone, shell, bone and beaten metals, but they had no knowledge of smelting. That they were not one race is proved by a study of the skulls from the mounds.

Authorities. — E. G. Squier and E. H. Davis, Ancient Monuments of the Mississippi Valley (1847); I. A. Lapham, Antiquities of Wisconsin (1855); Stephen D. Peet, Emblematic Mounds; Cyrus Thomas, “Burial Mounds of the Northern Sections of the United States,” in the Fifth Report (Washington, 1887), and “Mound Explorations” in the Twelfth Report (1894) of the Bureau of American Ethnology.

There are no works available for the Mound Builders collection.