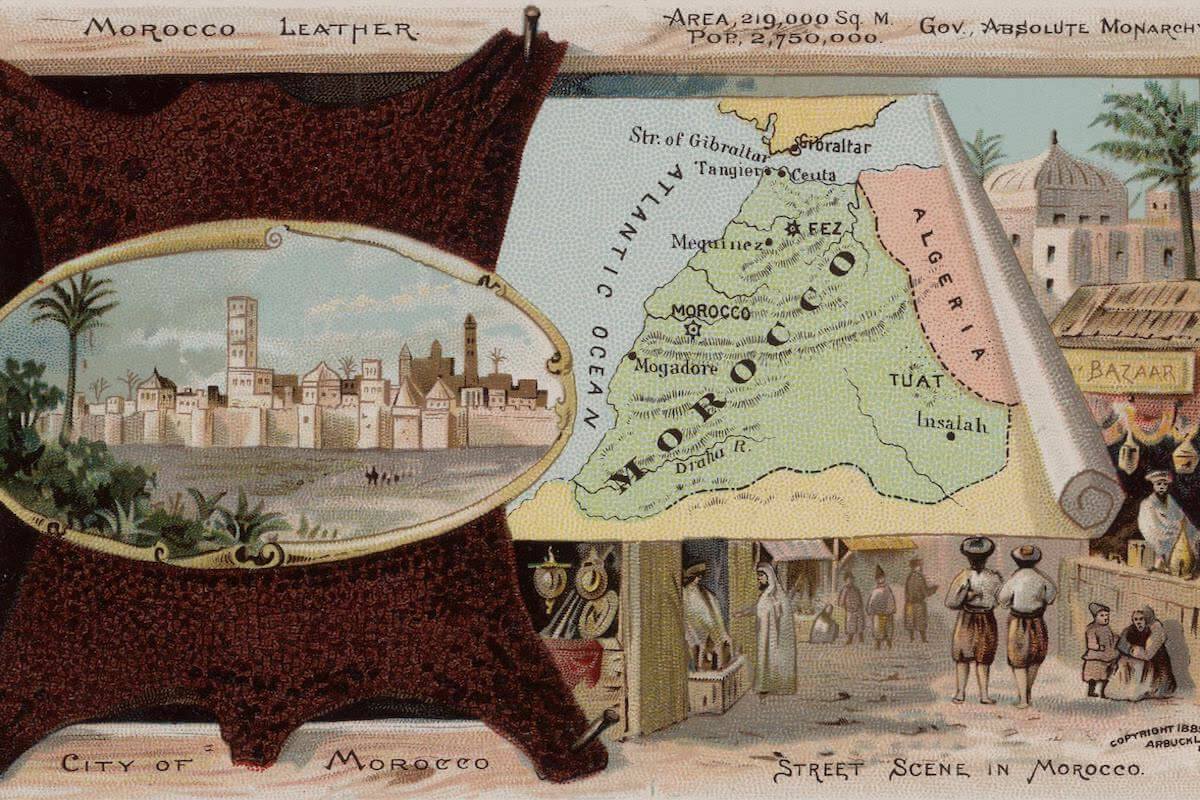 Morocco (m?-r?k?k?), a country in the northwest of Africa, a Mohammedan empire, consisting of the kingdoms of Fez and Morocco and the territories of Sus, Adrar, Draa and Tafilet, under a reigning sultan, whose government is a despotism modified by anarchy. It contains about 219,000 square miles, of which the Sahara occupies over 200,000. The Atlas Mountains cross it in several ranges from southwest to northeast, making a large region hilly.

There are rich, level plains in parts of the country, and, though the soil sometimes is thin in the western part, most of it is of use for pasturage and there is little real desert. Parts of Morocco, where the sea-breezes prevail and the Atlas Mountains protect from the hot winds of the desert, are temperate; but the interior valleys are very hot in summer, and in winter ice and snow are not uncommon. The products are those of temperate and tropical countries. Sheep and goat skins, oxen and oxhides, gum and eggs, with almonds, oranges, figs, lemons and dates are among the exports, while cotton is grown for home use.

The cultivation and use of tobacco are forbidden by the sultan, and no animal can be exported without his permission. The animals resemble those of southern Europe, save a few species which come from the regions of Africa to the south. The mineral wealth is almost unknown, as the interior has not been explored, but gold, silver copper, tin, iron, coal and petroleum are evidently abundant. The mines are scarcely touched, and no European is allowed to visit them.

The people, numbering about 4,500,000, are divided into six groups; the Berbers, who inhabit the mountain regions, are the original inhabitants; the Arabs, descendants of those who invaded the country in the 7th century; the Jews, who settled early in the region, with many refugees from Spain and Portugal; a few Europeans, mainly Spaniards, confined to the coastal towns; the Moors, a name given to all the Mohammedans but really belonging only to Arabs with a mixture of Spanish blood, found mostly in the large cities; and the negroes, who were brought from the Sudan as slaves. There are three capitals — Fez (population 140,000), Morocco and Mequinez; the seaports on the Atlantic are Mogador and Tangier (35,000 population) and on the Mediterranean, Tetuan.

Morocco for four centuries was a part of the Roman empire, and fell into the hands of the Vandals in 429 A. D., until, in 533 A. D., it passed to the Eastern empire Since 680 it has most of the time been in possession of the Arabs, and the people have been Mohammedans. First it was a part of the caliphate of Bagdad. Then it divided into several independent monarchies, which, after civil wars and revolutions, united in one kingdom under Mulai-Ismail, who reigned during 1692-1727. The country is still very backward, and, though the enslaving of Christians and piracy were done away with in 1817, the interior is almost inaccessible and slavery still exists.

In 1905-06 an international political crisis occurred in Europe over affairs in Morocco, Germany resenting exclusion from the Anglo-Franco understanding and alliance in Moroccan matters, which she interpreted to mean restriction of German trade and influence in the country. After a period of extreme tension between the Powers, an international conference met at Algeciras, Spain, the latter nation being party to the British-Franco-Spanish agreement. The result of the conference was to propitiate Germany by an open-door arrangement as regards trade, by drafting regulations tending to suppress the illicit traffic in arms, by the recruiting and control of a body of native police from 2,000 to 2,500 strong, distributed in detachments for the maintenance of order, especially at the ports, and by the establishment at Tangier of a state-bank, which is to fulfill the functions of treasurer and paymaster of the Moroccan empire.

Morocco, the southern capital of the sultanate, is situated at the northern end of a fertile plain, 1,447 feet above the sea. It is surrounded by an earth-wall from 20 to 30 feet high, with square towers at intervals, and seven gates, said to have been brought from Spain. It has the remains of former greatness, but is poorly built, with low, flat-roofed houses without windows and with narrow, unpaved, dirty streets. It carries on a considerable local trade, though much less than Fez, with several tanning and leather-dyeing establishments.

The palace is outside the city, its grounds covering 180 acres; no Europeans live within the city-walls. The city was founded in 1072, and in its greatest prosperity, in the i3th century, it contained more than 700,000 inhabitants. It has been sacked more than once in the civil wars, and has steadily declined. Its situation in sight of the Atlas Mountains and its command of the trade-routes make it probable that it will regain its former greatness whenever the country is well-governed. The city lies about 250 miles southwest of Fez. Its chief industries are the carpet and morocco-leather trade. Population 60,000.