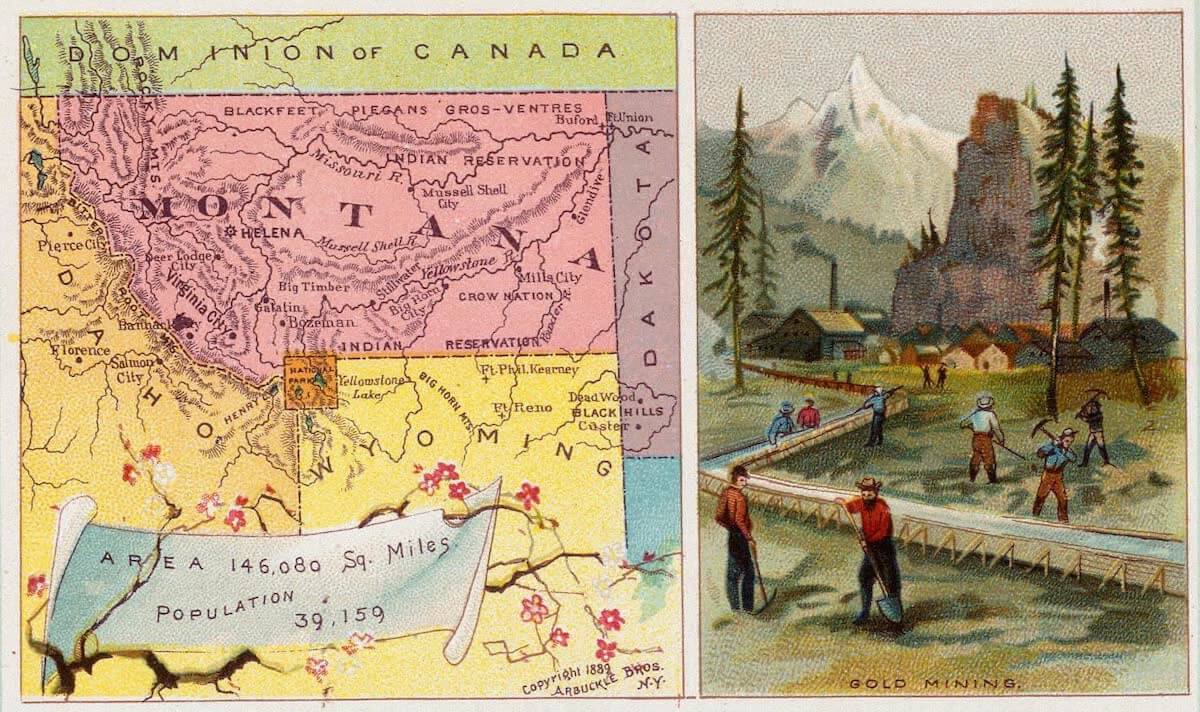 Montana (m?n-tä?n?), one of the northwestern states of the Union, is the third in size, coming next to Texas and California, covering a surface of 145,310 square miles and being larger than the British islands. It is bounded on the north by Canada, south by Wyoming and Idaho, east by the Dakotas and west by Idaho.

There are several United States posts on the boundary line of Canada and at other places, to keep in check the Indians, and four Indian agencies with their reservations. Montana was admitted to the Union in 1889, and has a population of 376,053, of whom 12,500 are Indians. Its capital is Helena (population 12,515). The other chief towns of the state are Butte City (population 39,165) and Great Falls City (population 13,948). Montana was early visited by fur-traders and French missionaries, but was not settled until after the gold discovery in 1861. It has been the scene of many Indian wars, notably the terrible massacre of General Custer's forces by the Sioux.

Surface. The Rocky Mountain region in the west includes one fifth of the state, while the east is dry, rolling plains, needing irrigation to make them productive. The mountainous part rises from 8,000 to 11,000 feet high, with high valleys and passes, but the eastern plains are lower than Colorado or Wyoming, so that the climate is somewhat milder. The dry regions have already been improved by canals and reservoirs built by private enterprise. The Bad Lands, as they are called, near Yellowstone River, have a peculiar soft, sticky soil, in which animals sink at every footstep. The Rocky Mountains cross the state for 300 miles, with numerous smaller ranges and fertile valleys.

Drainage. The Missouri flows 1,300 miles in Montana, and Clark's Fork of Columbia River runs north into Idaho, their sources being scarcely a mile apart. Through a great cañon, cut for five miles through a gorge from 600 to 4,000 feet deep; past Bear Tooth Mountain, 2,500 feet high; by the Long Pool, with its strange, booming noises; over the Great Falls, where, in four separate descents in 15 miles, its waters fall 450 feet; and through five miles of rapids the Missouri River makes its way. The Yellowstone, rising in the National Park, crosses the entire state for 850 miles. There are many mountain lakes and numerous mineral springs. The Warm Springs are near the wigwam-shaped geyser, with its smoke ascending like a council fire, in Deer Lodge Valley. Near Helena the hot springs have created a resort for invalids and tourists, with one of the largest bathhouses known and a very fine hotel.

Climate. The climate is variable, with sudden changes and scanty rainfall east of the mountains, while in the northwest the rainfall is more ample and the climate made milder by the great, warm current from Japan. The chinook winds also have a great effect on the climate. These warm winds may occur in any part of the state, making the air very mild, and melting large quantities of snow in a short time. Because of the absence of humidity the climate is very healthful, and especially beneficial to those affected with pulmonary trouble.

Minerals. The greatest wealth of the state is mineral, and its foremost industry is mining. About one third of the gold, silver, copper and lead mined in the United States is from Montana. The first gold was discovered in 1852, but little was done in mining until 1861, the mines now producing enormous quantities and bringing great wealth to their owners. Silver, lead and copper are also mined, these, with gold, producing in one year nearly $70,000,000. Large beds of coal and deposits of iron-ore, building-stone, coal and extensive claybeds are also found. The mining of sapphires began in 1891, four regions are worked, and Montana leads the Union in this country.

Forestry. More than one fourth of the state is covered with timber. In the western part white cedar, white pine and Engelman's spruce grow, and along the streams are forests of cottonwood. In the dry portions are stunted red cedars, which are of great value to the settlers, as they supply wood and posts. An alpine species flourishes on the summits, and assists irrigation by holding back the melting spring snow. The government forest-reserves include a considerable portion of the state's timber, nearly 11,700 square miles.

Agriculture and Stock-Raising. Near the streams is a rich black soil; a sandy loam on the bench lands; and grazing lands on the bluffs. Dry farming has been satisfactorily tried on the uplands, and the experiment station encourages this method. In the order of relative importance the crops are corn, wheat, oats, barley and hay. Yellowstone Valley produces two and three cuttings of alfalfa, and cereals are extensively grown, through irrigation, in Gallatin, Jefferson and Madison Valleys. The orchards produce apples, cherries, plums, apricots and peaches, while small fruits, as blackberries, strawberries, currants and gooseberries, grow in large crops. Stock-raising is one of the industries, the flocks running wild, guarded by shepherds and dogs, and horses and cattle are kept in large herds on the great ranches. Montana has more sheep and produces more wool than any other state.

Manufactures. Foremost among the industries stands ore-smelting. The largest smelter in the world is at Anaconda; there are many in Butte; and one each at Helena and Great Falls. There are some large lumber mills, sawmills and some extensive factories which make doors, sash, blinds and furniture. A woolen mill is located at Big Timber, a biscuit and cracker factory at Helena and malt liquors in all large places. Montana has 4,207 miles of railroad, and is served by the Great Northern the Northern Pacific, the Burlington, the Oregon Short Line and the Milwaukee and St. Paul roads, the last putting it into direct connection with Chicago.

Education. Although Montana is quite a young state, her educational system is admirable. Twelve hundred teachers are employed and handsomely salaried, and more than 25c. is spent every day on the education of every child. In 1898 the state passed a law establishing county high schools, which are supported by county assessments and are under separate administration from city schools. The state School of Mines is at Butte, the state normal school at Dillon, the state agricultural college and experiment station at Bozeman, the state university and Sacred Heart Academy at Missoula, and Wesleyan University at Helena. A summer school of sciences was established on Flathead Lake in 1899 by the state university. It is known as the University of Montana Biological Station, and is well-patronized by other states as well as Montana. There are institutions for the deaf-dumb-and-blind, for the insane, a reform school, a soldiers' home and a penitentiary.

There are no works available for the Montana collection.