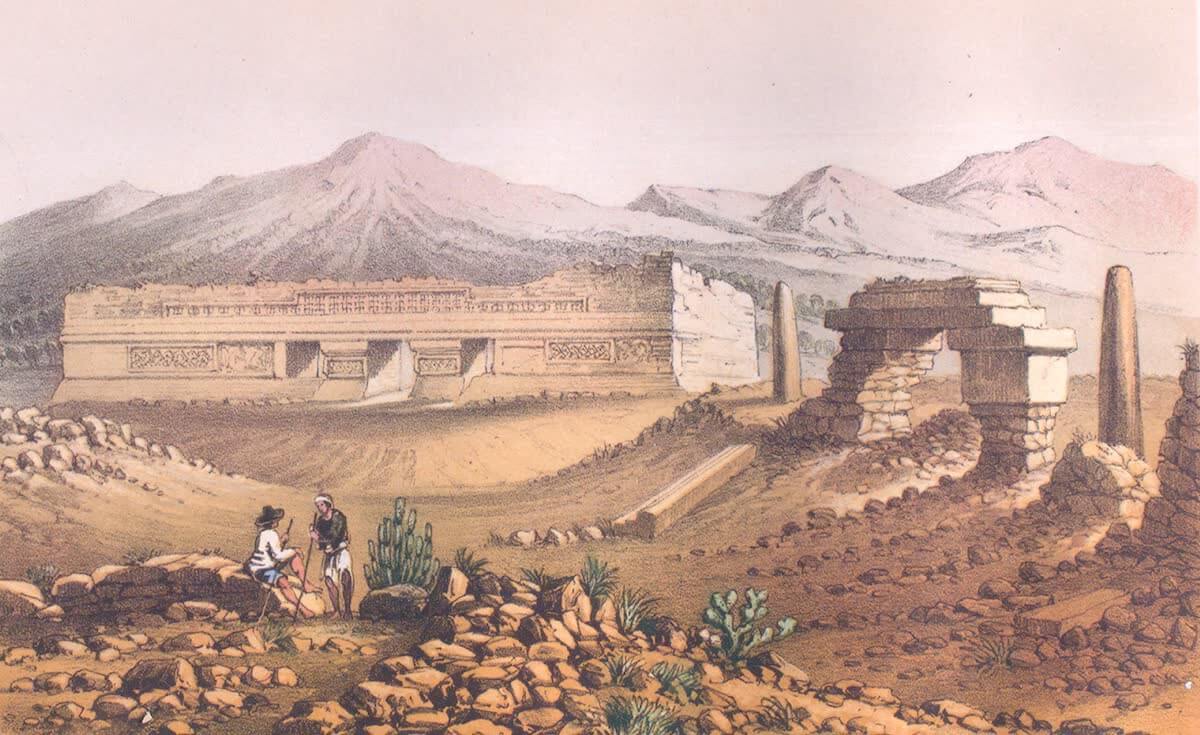 About ten leagues from the capital, on the road leading to Tehuantepec, are the remains of what antiquarians have styled the sepulchral palaces of Mitla, lying in the midst of a rocky granitic region, and surrounded by sad and sombre scenery. According to tradition, these edifices were erected by the Zapotecs, as palaces and sepulchres for their princes. It is asserted that at the death of members of the royal family, their bodies were laid in the vaults beneath, while the sovereign and his relatives retired to mourn the loss of the departed scion in the chambers above these solemn sepulchres, which were screened from the public eye by dark and silent groves.

Another tradition declares that these edifices were the abodes of a sect of priests, whose duty it was to dwell in seclusion and offer expiatory sacrifices for the royal dead who reposed in the vaults beneath. The village of Mitla was called Miguitlan, signifying, in the Mexican tongue, a place of sadness; while by the Zapotecs it was named Leoba, or "the tomb."

The palaces or tombs of Mitla, form three edifices, symmetrically arranged in an extremely romantic site; the principal and best preserved edifice has a front of nearly one hundred and fifty feet. A stair-way through a dark shaft leads to a subterranean apartment of one hundred feet in length, by thirty in width, whose walls are covered with Grecian ornaments similar to those on the exterior of the edifice, as shown in the plate. These external walls are said to be decorated with labyrinthine figures, formed by a mosaic of small porphyritic stones, and we recognize in them the same designs which are admired in the ancient vases, falsely called Etruscan, and on the frieze of the old temple usually assigned to the god Redicolus, which lies near the grotto of Egeria at Rome.

But the objects which chiefly distinguish the architectural remains of Mitla from all other Mexican antiquities are six porphyritic columns, which support the ceiling of a vast saloon. These singular columns,—almost the only ones found in the New World,—evince the extreme infancy of art;—they have neither bases nor capitals, and are cut in a gradually tapering shape from a solid stone, more than fifteen feet in length.

The distribution of the apartments in this extraordinary edifice presents some striking analogies with the monuments of Upper Egypt, described by Denon and the savants who composed the institute at Cairo. Don Pedro de Laguna, who examined them carefully many years ago, discovered on their walls some curious paintings of sacrifices and martial trophies. In order to form an idea of the almost Cyclopean style of architecture, we may remark the extraordinary dimensions of the stones above the entrances to the principal halls. Mr. Glennie states that one of these masses is eighteen feet eight inches long, four feet ten inches broad, and three feet six inches thick. A second is nineteen feet four inches long, four feet ten and a half inches broad, and three feet nine inches thick, whilst a third is nineteen feet six inches long, four feet ten inches broad, and three feet four inches thick. The antiquarian will not fail to observe, that there is some similarity between the exterior of these Oajacan remains and those which have been uncovered and described in Yucatan, by Stephens, during his second expedition. It is not improbable that an intercourse existed between the inhabitants of these districts, prior to the Spanish Conquest. We believe that these architectural remains and nearly all of those in Yucatan, Chiapas and Guatemala, were the abodes and temples of the Indians who dwelt in Mexico and the adjacent countries when Grijalva and Cortez first landed on our continent. The distance from Oajaca, through Chiapas and Tabasco, to Yucatan is not too great to have prevented even a rapid communication from Mitla to Uxmal, or Palenque. The reader will recollect that the realm of Montezuma is alleged to have extended to near the present limits of the Republic of Central America; nor will he forget with what rapidity the well trained Indian couriers of the Emperor passed over the three hundred intervening miles of mountain, plain and valley, between Vera Cruz and the Valley of Mexico, in order to inform their sovereign of the Spaniards' arrival and their leader's determination to visit the Aztec Court. At Cozumel, and elsewhere in Yucatan, the earliest Spanish adventurers were struck by the architecture of the edifices which were inhabited by the Indians. In their letters and narratives they always speak of these "buildings of stone and lime" as indicating civilization. The Indian deities were, at that time, unquestionably, worshipped in them. At Cholula, Tlascala, and Tenochtitlan or Mexico, as well as at Tezcoco,—pyramids, dwellings, palaces, walls, streets, causeways, were all built of stone cemented by mortar, and many of these objects were profusely ornamented. There can be no doubt of these facts, for they were attested at the time by numerous witnesses, while many of the material relics of that age have descended even to the present time, and may still be inspected in the capital of the Republic. Why, then, should we hesitate to believe that a vast chain of civilized, intelligent and affiliated nations, co-existed on the central part of this continent in the sixteenth century, and that the ruined cities, temples and pyramids which are spread from the waters of the Gila as far south as Peru and Chili, and whose wonderful remains are now gradually unearthed by the industry of antiquarians, are the architectural fragments of their national grandeur?

We do not conceive it necessary to throw back the Indian architects into the gloom of antiquity, long anterior to the arrival of the Spaniards. There is a natural yearning in the human mind for the mystery with which a vague, indefinite epoch, surrounds ruins that are accidentally discovered. But this is a poetical sentiment, rather than a fair starting point in archaeological researches; and, in spite of the national vanity which might be gratified by proving that the aboriginal civilization of our continent was as old as that of Egypt, we shall adhere to the belief that Mitla, Palenque, Uxmal and Quemada were inhabited by the builders or their descendants, whilst the thrones of Mexico and Peru were occupied by Montezuma and Atahualpa.