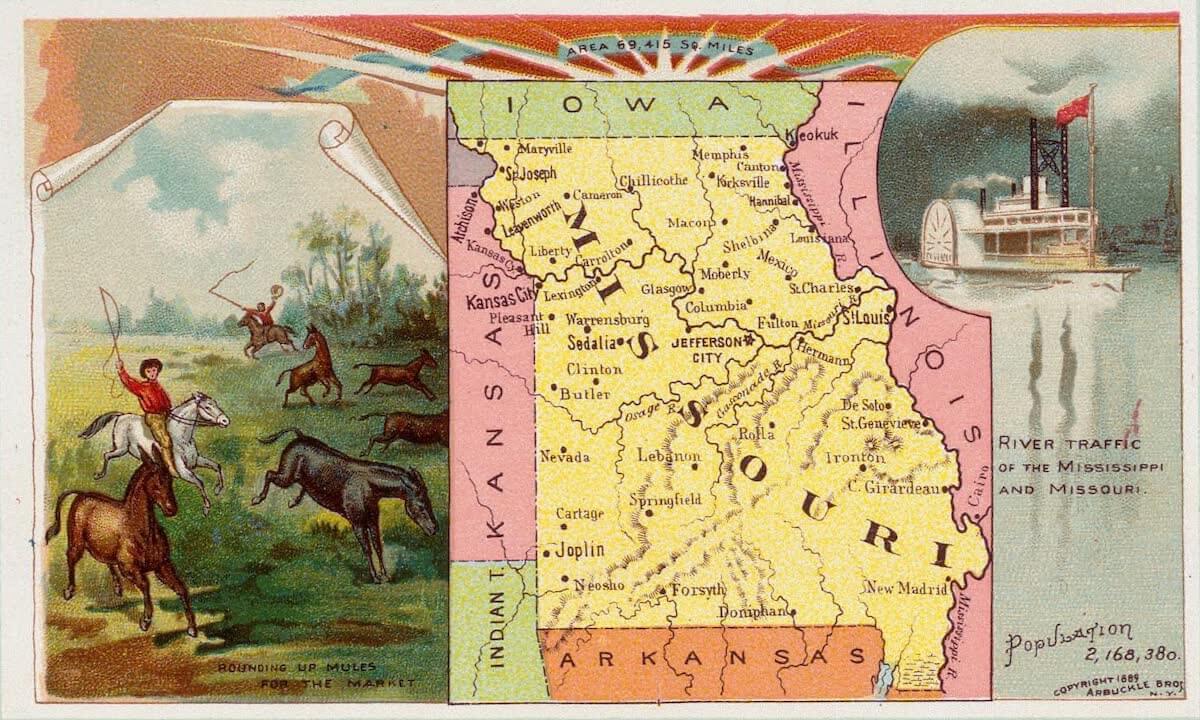 Missouri (m?s-soo?r?), one of the central states of the Union, lies on the western side of the Mississippi. It is 280 miles long, varies from 208 to 312 miles in width, and covers 68,735 square miles, being almost twice as large as Indiana. It is divided into two parts by the Missouri River, which flows 436 miles across the state from Kansas City to St. Louis.

In 1762 France ceded to Spain the territory west of the Mississippi, and St. Louis, founded in 1764, was a Spanish city with Spanish governors until 1804. The territory of Missouri was founded in 1812, and in 1821 part was made into the state of Missouri, though its boundaries were not settled until 1836.

The contest over the admission of Missouri into the Union ended with what is known as the Missouri Compromise, which allowed slavery in Missouri on condition that it be permitted in no other state north of 36½°. The state suffered severely in the Civil War, being divided in sentiment and overrun by both armies, but has since been very prosperous.

Population. The population is 3,420,143. Over half of the total foreign population are Germans, who, although small in number in proportion to the total population of the state, have contributed largely to its industrial and educational development.

Surface. The north part is rolling prairie, with forests along the rivers, while the south is hilly, the Ozark Mountains being in this part and reaching 1,500 feet in height, while another ridge in the southeast has many bold knobs, as Pilot Knob and Iron Mountain. There are a number of curious caverns, many miles long, with hidden lakes and streams and great halls and galleries, adorned with stalactites, and also numerous groups of mineral springs.

Drainage. This state has excellent drainage, its eastern border being formed by the Mississippi. Twelve miles above St. Louis the Missouri unites with it, and near St. Louis the Meremac. From the Ozarks come the Grand Platte, Osage and Gasconade, which are tributaries of the Missouri.

Climate. The climate is marked by extremes, lacking alike the moderating influence and protection of sea air or sheltering mountains.

Minerals. Missouri is rich in minerals, its iron fields (including Iron Mountain, which covers 500 acres, and Pilot Knob) being almost inexhaustible and supplying very rich ore. Lead is found in large quantities, some of the caverns having millions of pounds on their roofs and sides. It yields more zinc than any other state, and has several nickel mines, very large coal-fields and fine quarries of stone.

Agriculture. The soil is rich and places the state third in the value of agricultural products. Corn, tobacco, oats, wheat, hay and fruits are the chief crops. Missouri is surpassed only by California in the production of wine, and also is a large stock-raising country.

Manufactures. The manufactures are flour, beer, wine, tobacco, jewelry, shoes, clothing, railroad and street cars, drugs etc., and there is a large beef and pork-packing business.

Commerce. River transportation for freight is being revived, and large quantities of cereals are shipped from St. Louis to New Orleans for foreign markets. Many important railroad systems traverse the state, connecting at various points with lines extending in all directions. About 30 railroads enter St. Louis alone.

Education. Missouri has a public school system adopted in 1839. Free public schools for white and colored are required by law in every district for children from 6 to 20. The state has five normal schools, a university (established in 1839), with an agricultural college and farm at Columbia and a school of mines at Rolla. Washington University and St. Louis University at St Louis, Drury College at Springfield, Westminster College at Fulton, William Jewell College at Liberty, Grand River College at Edinburg and Missouri Valley College at Marshall are only a few among many institutions, and Missouri's school fund is the largest of any state in the Union.