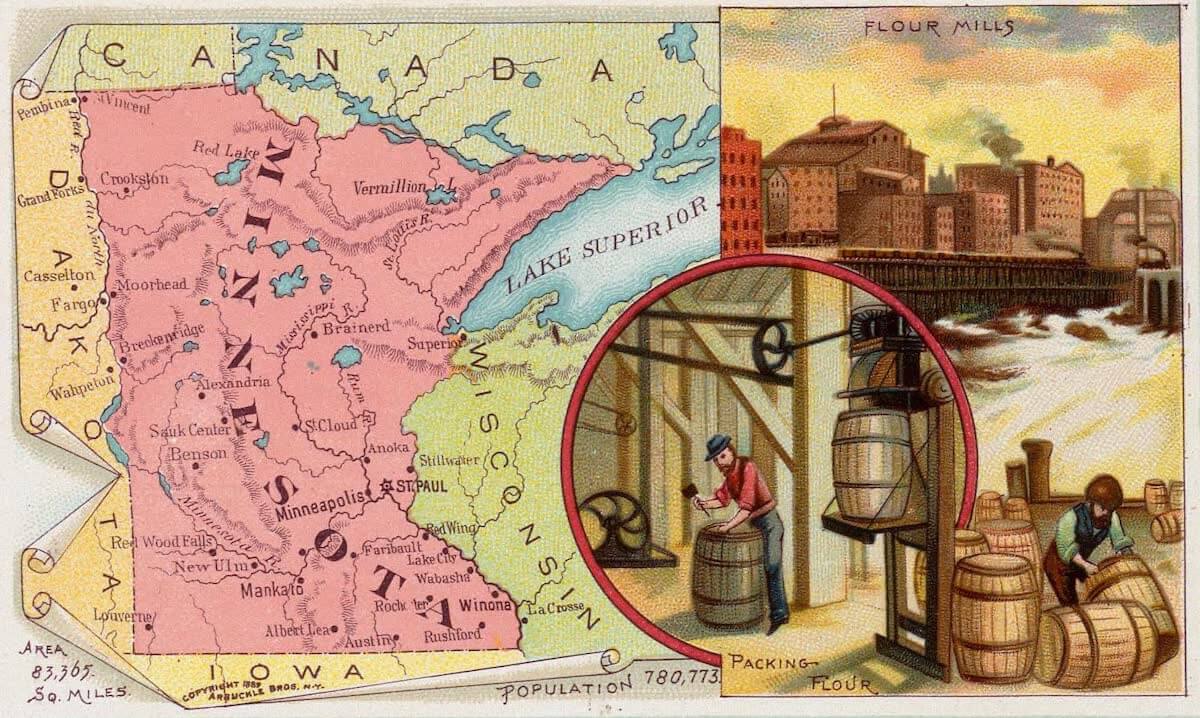 Minnesota belongs to the northern group of states, lying next to Canada. Its land-surface approximates 78,649 square miles, and is larger than Ohio and Indiana; and its water-surface is about 5,637 square miles, the total area being 64,286 square miles. It lies between Manitoba and Ontario on the north; Ontario, Lake Superior and Wisconsin on the east; Iowa on the south; and South Dakota and North Dakota on the west.

Minnesota was first visited by Groseilliers and Radisson, French fur-traders, in 1655-56 and 1660. The part of the state west of the Mississippi came into our hand by the Louisiana purchase. The part east of the Mississippi had been ceded to Great Britain by France in 1763 and belonged afterward to Virginia, who ceded it to the United States. Fort Snelling was built in 1820. After the Ojibwas and Sioux in 1837 surrendered their lands east of the Mississippi, immigration set in. In 1849 Minnesota became a territory, in 1858 a state. The capital is St. Paul, population 214,744.

Surface and Drainage. The state contains the sources of the three great river systems of North America. The Red River of the North sets out here for Hudson Bay; the St. Louis River and others entering Lake Superior find their way to the Atlantic; and the Mississippi starts from Lake Itasca on its long journey to the Gulf of Mexico. The Mississippi travels for 746 miles in and adjoining Minnesota, now through rapids and falls, as at Sauk Rapids and St. Anthony, and now broadening into lakes, as Lake Pepin. It is navigated to within 192 miles of its source.

About one third of this state, lying at the south and southwest and reaching in the Red River valley to the international boundary, is mainly prairie; and the other two thirds on the northeast originally were wooded, but now in large part are cleared and occupied by farms. The altitude above the sea ranges from 602 feet at the shore of Lake Superior to 2,230 on Misquah Hills, the highest in the state, north of this lake. The Mississippi drains about 47,000 square miles in Minnesota; about 7,700 square miles are tributary to Lake Superior and the St. Lawrence; about 9,700 square miles are drained to Rainy River and the Lake of the Woods; and about 18,300 square miles to Red River, making together 28,000 square miles in this state tributary to Lake Winnipeg and, through Nelson River, to Hudson Bay. In the central part is one of the most valuable forests of the west, called the Big Woods. Ten thousand lakes of every shape and size, with wooded islands and with bays and waters filled with choice fish, add to the beauty and wealth of the state.

Climate and Resources. The climate is severe in winter, but dry and bracing, with light snowfall. The soil is fertile, with extensive swamps in the north and many acres of land yet uncultivated. The hard spring-wheat of the state is the best in the world, while other products are corn, oats, potatoes and apples. It also is a stock-raising state. The great forests, which originally covered half the state, give it an enormous lumber trade. The iron mines of the Mesabi and Vermilion ranges, 50 to 75 miles north of Duluth, produce ore very rich in iron, and belong to an ore field reaching to the Mississippi. There are large quarries of fine building-stone; and at the pipe-stone quarry, near the southwestern corner of the state, the Indians come for the red stone that can easily be carved into pipes.

Education. Minnesota has 8,841 school-houses with 443,445 pupils. The state University of Minnesota in Minneapolis was opened in 1869, and now has 5,369 students and 390 instructors. The farm connected with the agricultural college is two miles from the university and covers 250 acres. Macalester College and Hamline University at St. Paul; Carleton and St. Olaf Colleges at Northfield; St. John's University (Roman Catholic) at Collegeville; Parker College (Free Baptist) at Winnebago City; Augsburg Seminary (Lutheran) at Minneapolis; and Gustavus Adolphus College (Lutheran) at St. Peter are a few of the higher institutions of learning. The population, made up of settlers from New England, other eastern and middle states and foreigners, mostly from northern Europe, Swedes, Norwegians, Danes, Germans, Russians, Icelanders, Lapps and Finns — with 10,225 Indians of the Ojibwa tribe, — numbers 2,075,708.

There are no works available for the Minnesota collection.