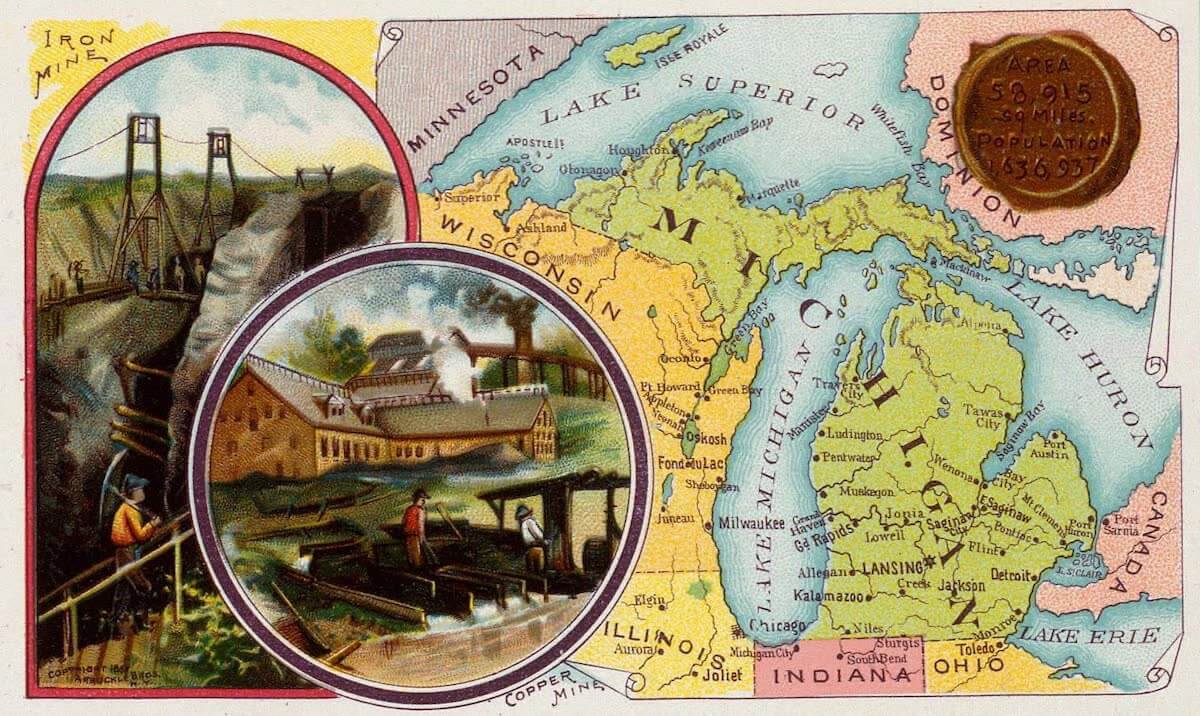 Michigan, one of the central states of the Union, is made up of two peninsulas, separated by the Strait of Mackinac. The lower peninsula is the larger one and is bounded by Lake Michigan and the Strait of Mackinac on the north, on the east by Lakes Huron, St. Clair and Erie, on the south by Ohio and Indiana and on the west by Lake Michigan. The upper peninsula lies between Lakes Huron, Michigan and Superior, being touched on the west by Wisconsin. The state is 400 miles in length and has an average width of 200 miles. Its area is 58,915 square miles.

Michigan was first visited by French Jesuits and a mission established for the Chippewas in 1641, In 1688 Father Marquette renewed the mission and later formed another at St. Ignace for the Hurons which soon became a French fort. Other settlements were made by La Salle, Duluth and Cadillac. In 1760 there were British garrisons at Detroit and other points, many being destroyed by the Indians under Pontiac. Detroit was the capital of the British possessions in the northwest until 1796. In the War of 1812 it was taken by the English and retaken by Commodore Perry. Michigan was admitted to the Union in 1837. The capital is Lansing (population 31,229), though the chief city is Detroit (population 465,766). The population, 2,810,173, includes 6,000 Indians and a large number of Canadians. See Michigan by Cooley.

Topography. A considerable part of the state is water, there being, besides the Great Lakes on its borders, over 5,000 small lakes. It has a coast-line of 1,624 miles, with 120 lighthouses and many fog-signals. The lakes have many islands; Manitoulin Island in Lake Huron, among the largest, covers 1,000 square miles. Lake Huron alone has 3,000 islands. The Strait of Mackinac, the passage between Lakes Michigan and Huron, is only four miles wide. Several large bays are on the coast — Saginaw Bay on the east and Great and Little Traverse Bays on the west. The passage from Lake Erie to Lake Huron is through Detroit River, Lake St. Clair and St. Clair River, the Detroit being 20 miles and the St. Clair 40 miles in length. Lake St. Clair Canal, called the Cut, was built in 1871, and is 8,200 feet in length and is used by over 2,500 ships yearly. St. Mary's ship-canal, at the head of St. Mary's River, has the largest lock in the world, and more ships pass through it than through Suez Canal. The largest rivers are the Grand, 270 miles, Saginaw, Au Sable, Kalamazoo and St. Joseph. The upper peninsula has the highest land in the state, the Porcupine Mountains, and the Mineral Range a little farther south. The climate is warmer than that of the same latitude in Wisconsin, and its fruits and flowers more varied.

Natural Resources. Michigan has large salt-wells, the product being greater than that of New York. Coal, though not of the best quality, is found; grindstone-quarries are in operation; while large amounts of fire clay are used in the manufacture of drain-pipes. Marble, freestone, limestone and glass-sand, with copper and iron, also form the mineral wealth of the state, besides its many mineral springs. The iron-ore is the purest in America, and amounts to one fifth of the whole product in the United States, and is found mostly in the northern peninsula. The richest copper-mines in the world are found near Lake Superior, at Keweenaw Point, and gold mines are in operation near Ishpeming. The forests of northern Michigan made the state one of the leading lumber-states of the Union, but these are nearly exhausted.

Manufactures. Among the manufactories are many depending upon the large supply of lumber, as wooden bowls, windmills, broom-handles, pumps, wheelbarrows, wood-pulp, veneers, carpet-sweepers, beehives and toys. The manufacture of furniture places Michigan in the third rank in this branch of manufacturing, and has given Grand Rapids worldwide renown. Shipbuilding is carried on largely, as is the making of cars of all sorts and snow-plows for the use of railroads, cariages and wagons, stoves, engines and agricultural implements. Flour and gristmill products and cereal breakfast-foods are manufactured extensively Battle Creek is noted for them. Other industries are connected with the beet-sugar production, with that of fermented liquors and with the manufacture of tobacco and cigars. There also are considerable activities in the operations of creameries and cheese-factories.

Agriculture. The soil is a light, sandy loam, barren in the north but rich and fertile in the south, and the state is one of the best fruit-states in the Union. Apples and peaches are the principal crops, but grapes, pears and plums are also grown, and Michigan takes second rank for its crop of berries. It also has second place for the growth of sugar-beets, and much attention is given to raising peppermint and celery. In 1910 the yield of wheat was 15,642,000 bushels, of corn 68,040,000 bushels and of oats 51,170,000. Cattle, dairy-products, poultry, hay and vegetables are important industries.

Education. Michigan has a thorough and efficient system of schools for higher education as well as for elementary education. Besides nine colleges and universities for both sexes and besides professional schools, Michigan maintains 8,598 schoolhouses, with 17,987 teachers, and four normal schools. The University of Michigan at Ann Arbor, one of the largest institutions in the country, was one of the earliest and most successful of state universities. The agricultural college is at Lansing, the mining school at Houghton, and there are colleges at Kalamazoo, Adrian, Albion, Battle Creek, Hillsdale, Detroit, Olivet and Holland. There are public libraries in Detroit, Grand Rapids and several cities, the state-library is at Lansing, and there is a fine library at Ann Arbor.

There are no works available for the Michigan collection.