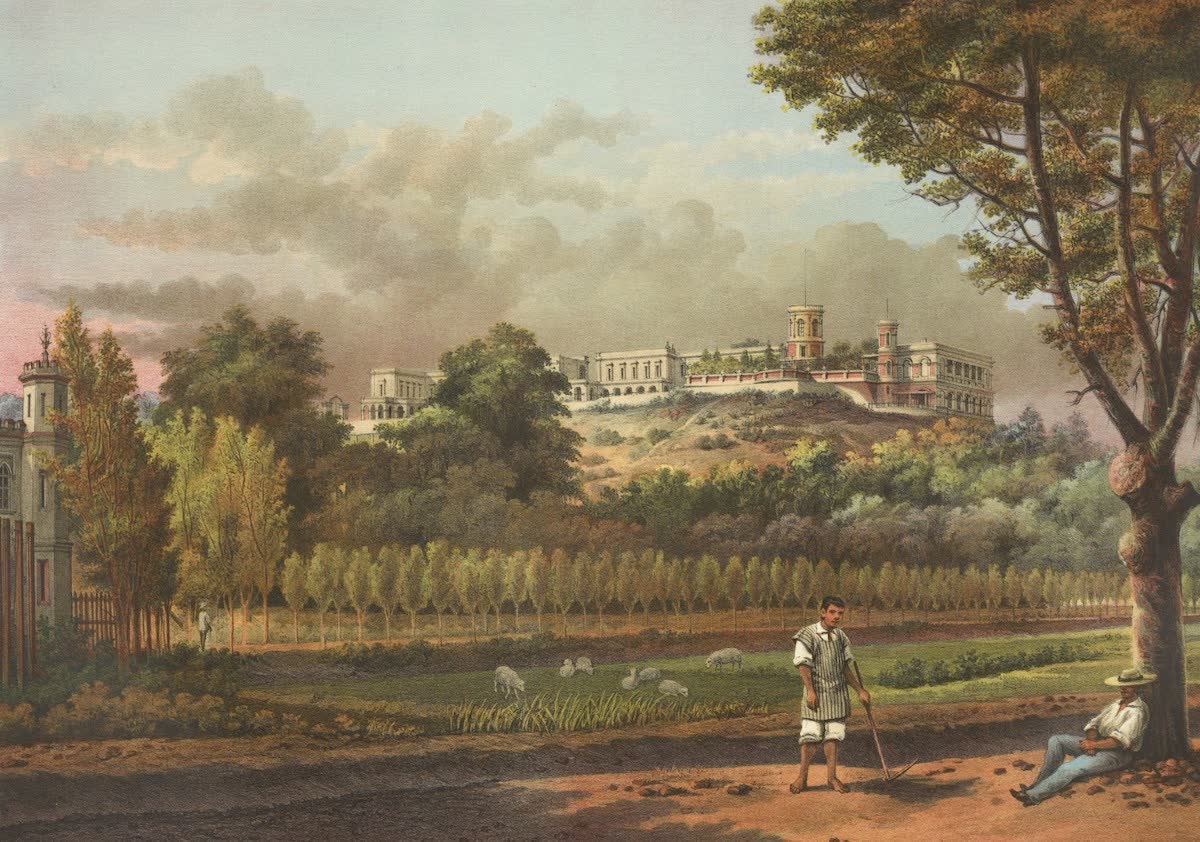 Mexico is a nation that lies between the United States and Guatemala, in North America. It is as large as Great Britain, France, Germany and Austria together, and is 2,000 miles long and from 130 to 1,000 wide. (Area 767,005 sq. miles.) Lying between the Gulf and the Pacific, it has a coast-line of 6,000 miles and numerous ports on both coasts. The peninsulas of Yucatan and Lower California belong to it.

Mexico was discovered for the Europeans when the Spaniards under Cortez landed at Vera Cruz in 1519, and the story of the latter's conquest of Mexico is one of the romances of history. In 1540 all the American territory belonging to Spain, including Mexico, was united under the name of New Spain, and governed by viceroys appointed by the home government.

The policy of the government, however, hindered the development of the country. Mexico was looked upon simply as a mine to be worked for the benefit of Spain. The natives were distributed as slaves on the plantations, and trade with any country but Spain was forbidden under penalty of death. In spite of this policy, however, it was one of the richest and most prosperous of the Spanish colonies.

After three centuries of submission the spirit of discontent, which had been growing during the wars of Spain with France under Napoleon, broke out in rebellion in 1810, under the leadership of a country priest named Hidalgo. In 1821 the last of a series of 57 Spanish viceroys, O'Donoju, surrendered the capital. General Iturbide was proclaimed emperor in 1822, but General Santa Anna raised the standard of the republic, and Iturbide was banished to Italy, and shot the next year when he attempted to return. From that time on the history of Mexico is one of civil war until 1876. Fifty-two presidents or dictators, one emperor and a regent ruled the country in that time.

The early history of Mexico, as learnt from its monuments and picture-writings, includes two periods — that of the Toltecs and the Aztecs. The Toltecs are thought to have reached the country about the 8th century; they cultivated the land, introduced corn and cotton, made roads and built temples, cities and monuments whose ruins still prove their skill. To their invention are thought to belong the Mexican hieroglyphics, or system of writing by pictures, and the Mexican calendar. They are believed to have been driven south by famine and pestilence to Guatemala and Yucatan in the 11th century. After an interval, about the end of the 12th century, the Aztecs entered the land and founded, about 1325, the city of Mexico. They were a less cultivated race than the Toltecs, but more so than the North American tribes, though they are considered now as belonging to the same family. (See Mesoamerica collection)

Texas secured its independence in 1836, and in 1845 became a part of the United States. The boundary line was unsettled, and a dispute over a strip of land brought on war with the United States, with its battles of Monterey, Palo Alto, Cerro Gordo, Buena Vista and Chapultepec, ending with the taking of the City of Mexico by the Americans under General Scott. Peace was concluded in 1848, Mexico ceding to the United States half a million square miles of her territory. In 1861, under the presidency of Juarez, the country was again involved in war with the allied troops of England, France and Spain, partly as the result of some of the internal changes made by Juarez, such as the separation of church and state and the confiscation of church property, and partly because of acts of injustice to foreigners during this period of disorder.

The difficulties were regulated by a treaty, to which the French commander, however, did not agree. Spain and England withdrew their forces, but France declared war, and entered the City of Mexico in 1863. The crown was offered to Archduke Maximilian of Austria, who was declared emperor. After the withdrawal of the French troops from the country, owing to the remonstrance of the United States based on the principle of the Monroe doctrine, the republican troops under Juarez defeated the army of the emperor, who was taken and shot in 1867. Juarez remained president until his death in 1872, when Tejada succeeded; and in 1876, after another revolution, Porfirio Diaz, the ablest of Mexican rulers, became president.

He was re-elected continuously, his eighth term beginning Dec. 1, 1910. Early in 1911 a revolution resulted in the resignation of Diaz and the election of Francisco Madero, who, in turn, was deposed, and General Victoriana Huerta, one of the leaders in both revolutions, made provisional president. Madero was shot dead in the streets of Mexico on the night of February 22, 1913, while being transferred from one prison to another. The people of Mexico, numbering in 1911 15,063,207, are over one-third Indians, embracing 35 tribes, living in communities in villages; the Mestizos, the half-breeds, with a mixture of Spanish and Indian blood, who form about one half the population; and the higher class, which is largely Spanish.

In the early 1900s Mexico was a federative republic. The constitution, originally promulgated on Feb. 5, 1857, and subsequently amended, declares that the Mexican Republic is established under the representative, democratic and federal form of government, composed of states free and sovereign in everything relating to their internal administration, but united in one single federation. The Supreme Government is divided into three coördinate branches: Legislative, Executive and Judicial. The legislative power of the nation is vested in a general Congress, consisting of two Chambers, the Deputies and the Senate. The executive power is lodged in a single individual known as the "President of the United Mexican States," whose term of office is four years. By an amendment to the Constitution, under date of Dec. 20, 1900, he may be re-elected indefinitely. The judicial power is vested in the supreme court and the district and circuit courts.

The territory of the United Mexican States is divided into 1 Federal District, 27 States and 2 Territories, whose organization is almost identical with that of the American Union. The States, as before indicated, are free and sovereign in all matters pertaining to their internal administration, their government being vested in three heads, namely: State government, State legislature and State judicial power. The States and Territories are, for convenience, classified as follows, according to their situation:

There are 24 ports on the Gulf and 31 on the Pacific. Many of the former have steamship lines direct to the Gulf ports of the United States and Europe. In 1911 there were 1,545 miles of railway open. Many brilliant pictorial works have been created regarding the railroads in Mexico during the 19th and 20th centuries.

Mexico has not been a manufacturing country, but with the extension of railroads and the influx of foreign capital and enterprising men a decided impulse has been given to manufacturing industries. One hundred and fourteen cotton mills were in operation in 1904. There also are numerous woolen-mills, and silk-weaving is rapidly increasing. Sugar-mills and flour-mills are many, but do not supply the local demands. Iron-foundries are numerous and profitable, but have been hindered by lack of transportation facilities.

Pottery is made in many places, the cities of Guadalajara, Zacatecas, Guanajuato and Puebla being centers of the industry. Other industries are cotton-seed mills, tanneries, manufactures of glassware, hardware, drawn work and feather work. A noteworthy industry is the exporting of hides and skins. Mexico occupies the fourth rank among nations of the earth in this particular branch, the annual export amounting to more than $6,000,000 Mexican silver. The government is doing all in its power to foster home manufacture and has offered great inducements to those who will establish upon Mexican soil enterprises which will utilize its great resources. As a result the country is now making great strides in the industrial and manufacturing field. Smelting and reduction works, waterworks and electric plants are springing up throughout the country.

The capital invested in Mexico by United States companies, firms and individuals, has been stated to be in round numbers $1,000,000,000 gold, and a large part of this investment has been made within a few years. Of the total 70 per cent. is invested in railroads, the rest in mining and agriculture. United States firms have recently built many electric light and power plants, waterworks plants, telephone systems and similar plants. English capitalists have also invested heavily in Mexican enterprises, particularly in connection with the development of the oil fields.