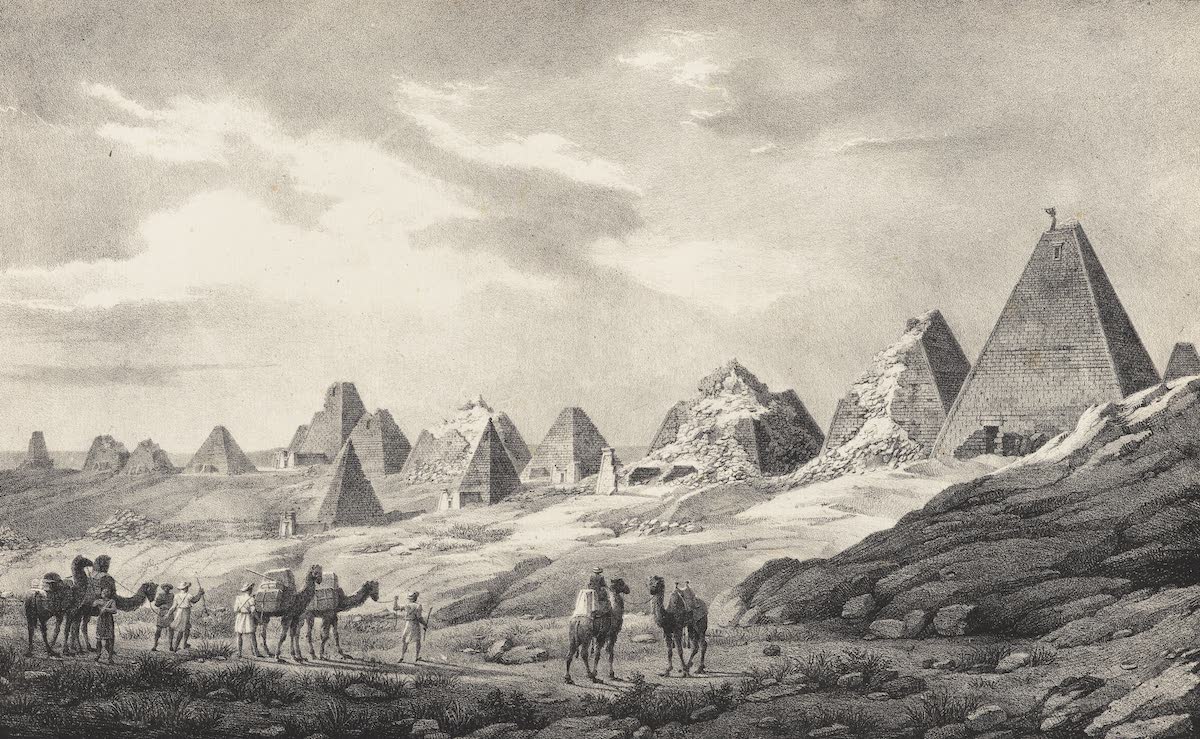 MEROE, the general name (as Island of Meroe) for the region bounded on three sides by the Nile (from Atbara to Khartum), the Atbara, and the Blue Nile; and the special name of an ancient city on the east bank of the Nile, 877 m. from Wadi Halfa by river, and 554 by the route across the -desert, near the site of which is a group of villages called Bakarawiya.

The site of the city is marked by over two hundred pyramids in three groups, of which many are in ruinous condition. After these ruins had been described by several travellers, among whom F. Cailliaud (Voyage à Méroé, Paris, 1826–1828) deserves special mention, some excavations were executed on a small scale in 1834 by G. Ferlini (Cenno sugli scavi operati nella Nubia e catalogo degli oggetti ritrovati, Bologna, 1837), who discovered (or professed to discover) various antiquities, chiefly in the form of jewelry, now in the museums of Berlin and. Munich.

The ruins were examined in 1844 by C. R. Lepsius, who brought many plans, sketches and copies, besides actual antiquities, to Berlin. Further excavations were carried on by E. W. Budge in the years 1902 and 1905, the results of which are recorded in his work, The Egyptian S?d?n: its History and Monuments (London, 1907). Troops were furnished by Sir Reginald Wingate, governor of the Sudan, who made paths to and between the pyramids, and sank shafts, &c.

It was found that the pyramids were regularly built over sepulchral chambers, containing the remains of bodies either burned or buried Without being mummified. The most interesting objects found were the reliefs on the chapel walls, already described by Lepsius, and containing the names with representations of queens and some kings, with some chapters of the Book of the Dead; some steles with inscriptions in the Meroitic language, and some vessels of metal and earthenware. The best of the reliefs were taken down stone by stone in 1905, and set up partly in the British Museum and partly in the museum at Khartum. In 1910, in consequence of a, report by Professor Sayce, excavations were commenced in the mounds of the town and the necropolis by J. Garstang on behalf of the university of Liverpool, and the ruins of a palace and several temples were discovered, built by the Meroite kings.

Meroe was probably also an alternative name for the city, of Napata, the ancient capital of Ethiopia, built at the foot of Jebel Barkal. The site of Napata is indicated by the villages of Sanam Abu Dom on the left bank of the Nile and Old Merawi on the right bank of the river. New Merawi, 1 m. east of Sanam Abu Dom and on the same side of the river, was founded by the, Sudan government in 1905 and made the capital of the mudiria of Dongola.