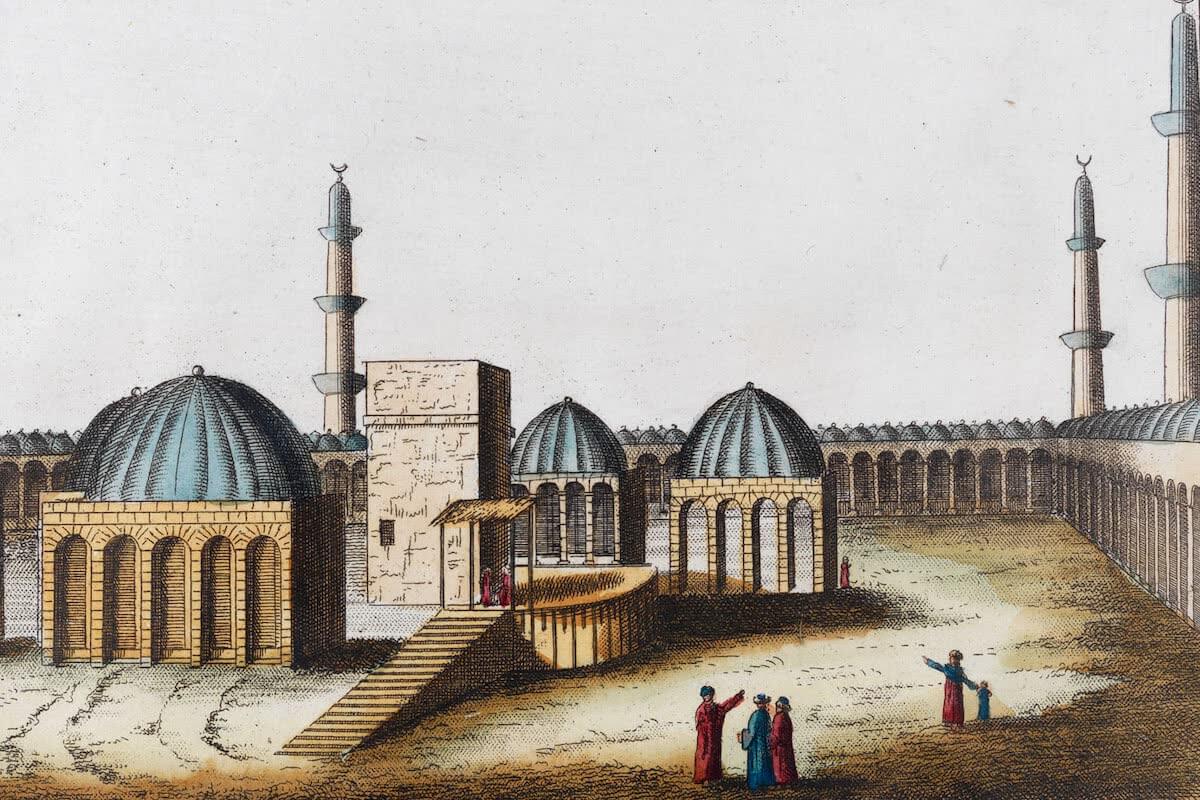 MECCA (Ar. Makkah, or Bakkah, Koran, Sura iii. 90; called also al-Musharrifah, the Exalted, Umm al-Kura, mother of cities, and al-Batad al-Am?n, the safe place, known to the geographer Ptolemy as Macoraba). Capital of the Turkish Province of Hedjaz in Arabia, and, through being the birthplace of Mohammed, and containing the Kaaba, the central and most holy city of all Islam. The two other principal holy cities are Medina and Jerusalem. It is situated in latitude 21° 28' N. and in longitude 40° 15' E., 250 miles south of Medina, and about 60 miles east of Jiddah, its port on the Red Sea, in a narrow, barren valley, surrounded by bare hills from 250 to 800 feet high.

The city is about a mile and a half long, and from one-third to two-thirds of a mile wide, and is divided into the upper and lower city. An aqueduct built by Zubaidah (810), wife of Harun al-Rashid, brings good water from the mountains to the east. By its position, Mecca commands the trade routes connecting lower Hedjaz with North, South, and Central Arabia, and it has at all times been a commercial and religious centre. The streets are somewhat regular, but unpaved; dusty in summer, and muddy during the rainy season.

The houses are often five stories high. Some of the Government buildings, the Hamidiyyah, or palace of the Governor, the printing office, the chief watch-house, and the three armories, are in the new part of the city (al-Jiy?d) southeast of the ?ar?m, or sacred precincts, and this part of the city has a European appearance. The only manufactures of Mecca are rosaries and pottery; some dyeing is also done; the inhabitants make their living chiefly by letting rooms at the time of the pilgrimage (see Hajj) to the pilgrims who come here often to the number of 100000.

The largest number of these pilgrims are Malays and Indians; then come negroes, Persians, Turks, Egyptians, Syrians, Tatars, and Chinese. Ordinarily the city contains about 50,000 inhabitants. The centre of the city is the Masjid al-?ar?m, or Sacred Mosque, which lies beneath the level upon which the rest of the city stands and is always liable to inundations from the Sail or mountain torrent. This sacred area is capable of holding 35,000 people. (See Kaaba.) A great number of people are attached to the mosque in some kind of ecclesiastical capacity, as Kh??ibs (preachers), K?tibs (scribes), Muftis, judicial assessors, muezzins, etc.

In addition to this, each section of the Mohammedan world has its representatives in Mecca, who take care of its pilgrims, provide them with lodgings, instruct them in the ceremonies, and the like. By the side of the mosque runs the Mas‘ah, a street lined by high houses and reaching up to the hills, Safa and Marwah, through which the pilgrims must run seven times. A telegraph line connects Mecca with Jiddah on the west and with Taif on the east, where the Meccans spend their summer.

The history of Mecca has been an eventful one. Mohammedan legend holds that it was inhabited by Ishmael, whose posterity was supplanted by the Bann Jur?um of Yemen, who in their turn were supplanted by the Khuza'a, also of Yemen, in the year A.D. 210. About 450 a certain Kussaï of the Koreish family, and an ancestor of Mohammed, seized the Kaaba and his family is supposed to reign there to-day. Here Mohammed was born (c.570), and in the same year the city was menaced by the Abyssinians (‘Year of the Elephant’). Its patricians opposed the Prophet, but gave in eight years after he had fled to Medina. Though large sums of money were lavished upon it by successive Mohammedan rulers, it was not an easy city to hold.

It had its own pretender to the Caliphate in Abdallah-ben-Zobeïr, who was besieged in Mecca in 692 by the Caliph al-Hajjaj and finally slain. In 930 it was devastated by the Karmathians. But it always had its own rulers or sherifs, descendants of the Prophet through Hasan, son of Ali; and, though they recognized the supremacy of the Fatimites, Mamelukes, and Turkish sultans, they had a large measure of independence.

Since Selim I. (1517) they have ruled in the name of the Turkish Sultan. In 1803 the Wahhabis took the city, but were driven out by Mehemet Ali in 1813. A change in the dynasty of sherifs occurred in 1827. Since 1840 their prestige has gradually diminished, a Wali (Governor) being sent by the Porte to offset their power. Though all non-Mohammedans are strictly prohibited from visiting the sacred territory, a few Europeans have been there (see Hajj, where the literature will also be found). Consult Snouck-Hurgronje, Mekka (The Hague, 1888-89, with atlas), which is the standard work on the subject.

There are no works available for the Mecca collection.