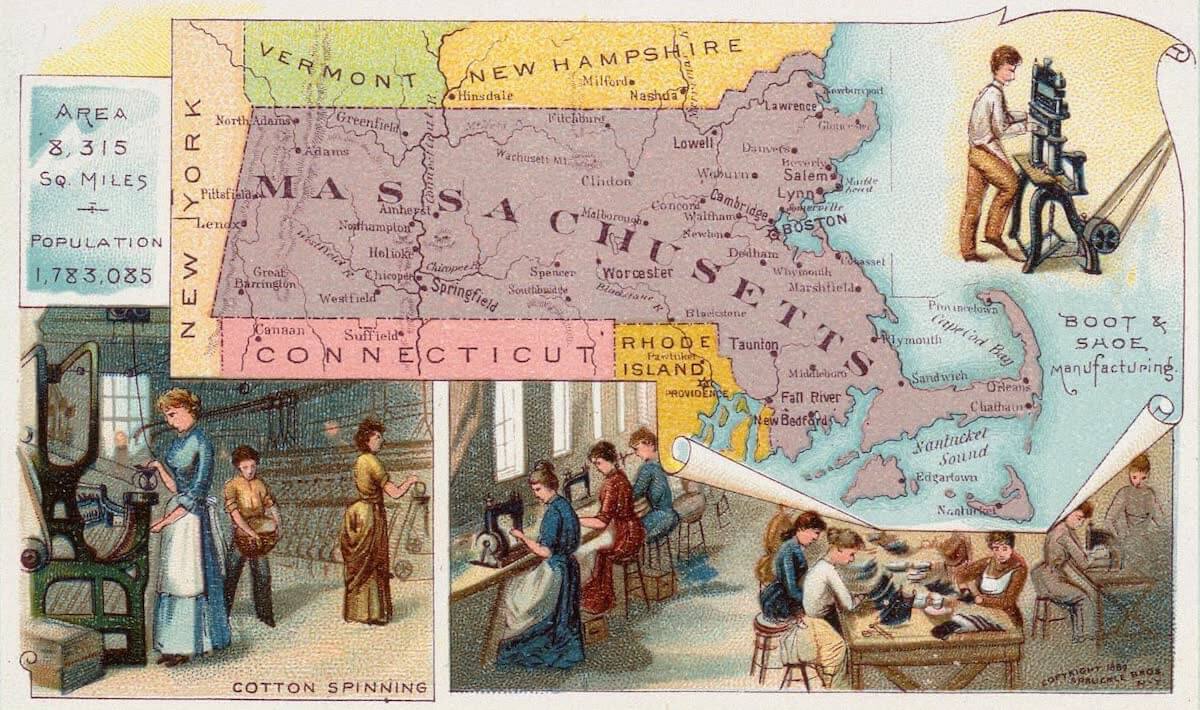 Massachusetts (mas'a-ch?'s?ts) is one of the New England states and one of the original 13 states. It is 47 1/2 miles wide and 182 long, being but one sixth as large as New York. It is bounded on the north by New Hampshire and Vermont, on the south by Connecticut, Rhode Island and the Atlantic, on the east by the Atlantic and on the west by New York. It contains 8,315 square miles, and has a population of 3,366,416.

The earliest discovery of the land embraced in Massachusetts is thought to have been made by the Norsemen about 1000. In 1497 the Cabots reached its coast. But the landing of the Pilgrim Fathers at Plymouth, Dec. 22, 1620, is the date of the first permanent settlement. The stone on which they landed is carefully guarded at Plymouth. Other settlements were made later, forming Massachusetts Bay Colony.

The colonists endured great privations, and suffered terribly in Indian wars. The government at first was in the hands of the colonies and was carried on with Puritan vigor; but in 1692 the country was ruled by a governor appointed by the king. The first battles of the Revolutionary War were fought on the soil of Massachusetts, at Lexington and Bunker Hill, and the troops of Massachusetts were among the earliest on the field in the Civil War.

Topography. Cape Cod is a sandy point, 65 miles long, shaped like a bent arm, inclosing Cape Cod Bay and, with Cape Ann, making Massachusetts Bay. Martha's Vineyard and Nantucket are large islands off the coast. The Green Mountains of Vermont extend into the west of the state in two ranges, with no very high peaks, Greylock, 3,505 feet high, being the highest; and the coast is lined with highlands. The scenery of the western part, especially of Berkshire County, is very beautiful, and it is sometimes called the Switzerland of America. The rivers, as the Merrimac, Connecticut, Housatonic and Concord, are useful mainly as furnishing water-power for innumerable factories.

Natural Resources. Granite, sandstone, limestone and hematite are the chief mineral productions. The fisheries are very valuable. Mackerel, halibut, herring and cod are found in vast numbers. Shellfish, as crabs and lobsters, are also caught, and the oysterbeds on the southern coast are very extensive.

Agriculture. The valleys of the Housatonic and Connecticut Rivers are fertile, but the higher parts and the long sandy coasts are poor soil. Its agriculture is not equal to supplying the demands of its people, as it is the least agricultural state in the Union, only nine percent. of its laborers being employed on farms. Dairy-products, poultry and eggs have occupied the attention of most of the farmers.

Manufactures. Its great source of wealth is its manufactures. Wire-drawing was begun in 1666, and the manufacture of iron and steel wire is still a very large industry. The oldest watch-factory in the United States and the largest in the world is at Waltham. The many shoe-factories in Lynn and the great cotton-mills in Lowell, Lawrence, Pall River and New Bedford are well-known. Shovels, belting, clothing, silverware, jewelry, books, cotton, woolen and silk goods, chocolate and confectionery,carpets, furniture, carriages and paper are a few of the many useful articles produced. At Roxbury originated the manufacture of india-rubber goods in this country. Massachusetts is the greatest shoe-and bootmaking state in the Union.

Education. The most lively interest in educational matters has been manifested from the earliest days, and the public-school system is not excelled in the country. By provision of law each city and town maintains its schools under the supervision of a local board. The members of these boards are elected by women as well as men. The state's board of education is appointed by the governor, but exercises no direct control over the local boards except in a general way. It promotes all educational matters, looks after the distribution of the income of the state's school-fund and directly manages the state's normal schools, of which there are ten. The State Normal Art-School at Boston trains teachers in drawing and designing.

Education is compulsory between seven and 14, and evening schools in the elementary branches, for persons over 14, are maintained in all towns of 10,000 or more, and evening high schools in towns of 50,000 or more. Among the higher educational institutions are Harvard University, with 4,128 students; Boston University, with schools of art, music, agriculture, law, theology and medicine; Clark University, at Worcester, for the higher special work of college-graduates; Holy Cross College in the same city, an institution of note; Massachusetts Institute of Technology; Massachusetts Agricultural College at Amherst; Andover Theological Seminary; Newton Theological Institute. Amherst, Williams, Tufts and Boston College (Catholic), are some of the best-known institutions.

Radcliffe College for women was founded in 1879. Wellesley College, near Boston, Smith College at Northampton and Mt. Holyoke College, the earliest school of the kind for women in America, are among the ample provisions made for the higher education of women. Music and art are recognized in the New England Conservatory of Music at Boston, Art-Tile Works at Chelsea, Boston Museum of Fine Arts and many art-schools. There are over 500 public libraries, the largest being in Boston, Worcester, Cambridge and Springfield, besides the large libraries of the colleges and the Boston Athenæum.

State Institutions. Among the institutions for defectives are the schools for the deaf at Boston and Northampton; two schools for the blind at Boston; insane asylums at Danvers, Taunton, Northampton, Worcester and Westboro; hospital for epileptics at Foxborough; a school for the feeble-minded at Waltham; and a sanitarium for consumptives at Rutland. There are a reformatory for men at Concord and another for women at Sherborn. The state-prison is at Boston, and the soldiers' home at Chelsea.

Railways. Massachusetts was one of the first states to build railroads. Hoosac Tunnel, one of the first long tunnels, cut for five miles through Hoosac Mountain, costing $16,000,000 and taking 20 years to build, was undertaken by the state. The street-railway companies own nearly 3,000 miles of track, and almost all the principal cities and towns are connected by electric lines. Boston has both a subway and an elevated railway, and its shipping-trade is next to that of New York.