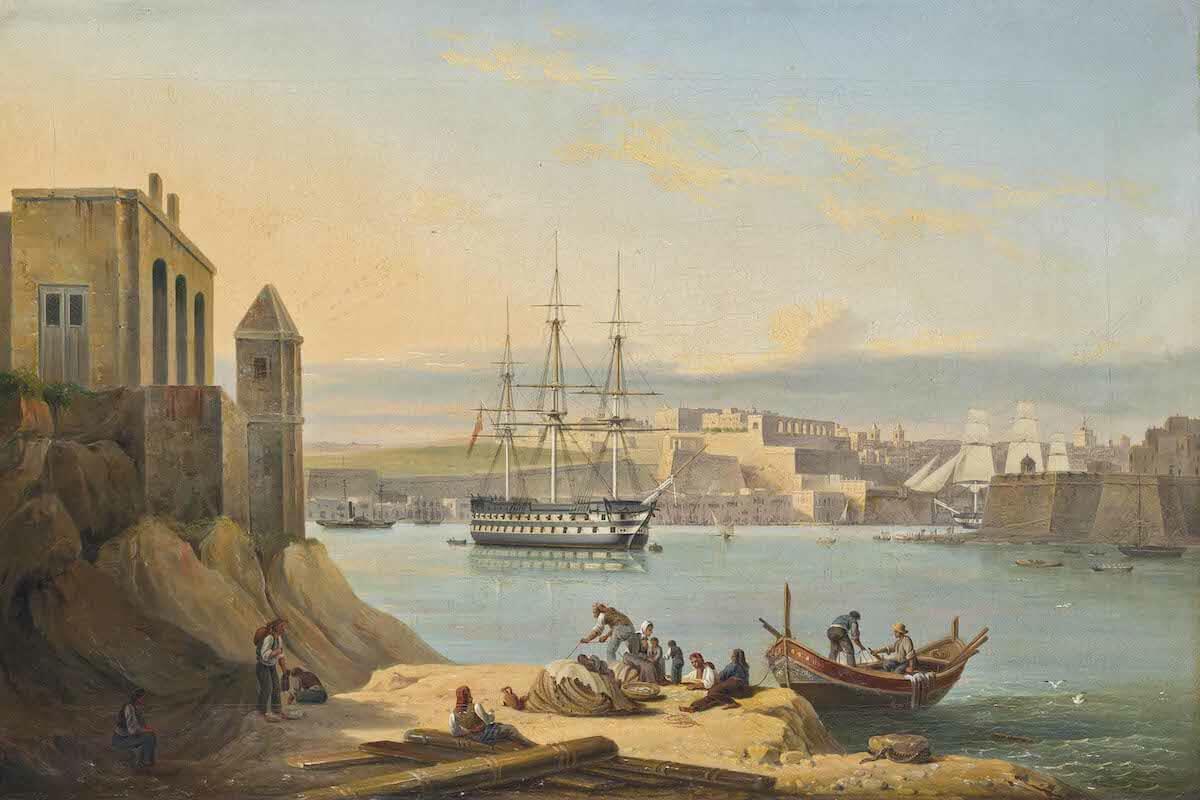 The group of Maltese islands, including Malta (91.5 sq. m.), Gozo (24 3/4 sq. m.), Comine (1 sq. m.) and a few inconsiderable islets, lies 58 miles south of Sicily and about 180 miles S.E. by E. of Cape Bon in Tunisia. Malta is the headquarters of the British Mediterranean fleet, and the principal coaling station in the Mediterranean.

There can be no doubt that, at a very early date, Malta was colonized by the Phoenicians. Numerous megalithic and other remains, as well as inscriptions, testify to this fact. It is even probable that the Phoenicians gave the island its name, which seems to be derived from the verb "malat", "to take refuge" and to mean, therefore, "the place of refuge". It is often asserted that Malta, during the eighth century B.C., passed into the possession of the Greeks and was held by them for three centuries, but there is little evidence to support this view.

It is clear, however, that the Carthaginians became masters of the island, probably in the fifth century B.C., at a time when the weaker Phoenician states united, for mutual protection, under the leadership of Carthage. It is certain, too, that Malta, about the time of the Second Punic war, though the precise date of its capture cannot be fixed (cf. Livy, xxi, 51), became a Roman possession and, after the destruction of the Roman power in the West, remained subject to the Byzantine Empire until 870. In that year the Arabs established themselves in the island where, it appears, they were, as in Sicily and elsewhere, welcomed as deliverers from the hated Byzantine yoke.

The principal and almost the only monument of the Arab dominion is said to be the Maltese language, which is Semitic and has much in common with Arabic. The weight of the best authority seems, however, to incline decidedly to the view that the present Maltese language is directly descended from the Phoenician with but little modification by the Arabic. The Arabs, in fact, seem to have left the Maltese very much to themselves and to have interfered with their language as little as they interfered with their religion and their popular customs.

The account of the capture of Malta by the Normans, as given by Mataterra, the secretary of Count Roger, does not, certainly, convey the idea that the Saracens were sufficiently numerous to offer any serious resistance to the invaders. If the Arab influence had prevailed so far as to make a complete change in the language of the islanders, this could only have been the sequel to a process of denationalization which had no counterpart in the neighbouring island of Sicily and which would have implied the presence of a strong army of occupation. History and philology alike point to the conclusion that the Maltese, in spite of powerful outside influences, are still substantially, a Phoenician people.

Count Roger of Sicily, who landed in Malta in 1090, was welcomed, it seems, not as a deliverer from an oppressive yoke, but because the islanders naturally preferred a Christian to a Mohammedan rule. The Norman domination established by him lasted about a century. It was probably during this period that the absence of a national literature, the need of employing foreign notaries, and other causes, forced the Maltese to adopt Sicilian as their written language. Later on, when the more fully developed Italian asserted itself in Sicily it naturally became the medium of legal and commercial transactions in Malta. Its influence on the spoken language was confined to the vocabulary, which contains a number of Italian words, the structure remaining unaltered. At least conjointly with Latin and other languages, Italian has remained the literary language of the island right down to our own times.

In 1199 Malta, along with Sicily, passed into the hands of the Swabian emperors, but, after the battle of Beneventum (1266) in which Charles of Anjou put an end to the Swabian rule in Apulia and Sicily, it remained for seventeen years in the possession of the French. In 1283, the year after the "Sicilian Vespers", the island, which had fared badly under the Swabians and worse still under the French, once more changed masters and became the property of King Peter III of Aragon. Under the Spanish rule, which lasted two centuries and a half, Malta made considerable progress in civilization. This was very largely owing to the influence of the religious orders, especially the Franciscans, Dominicans, and Augustinians, but partly also to the influx of foreign beneficiaries who, if they lived on the wealth of the land, made some return in the higher culture which they helped to diffuse.

Early in 1523, the Knights of St. John, after the fall of Rhodes, left that island with the honours of war, and being unable, for nearly seven years, to find a lodgment that was convenient to all parties concerned, they were at length established in Malta, which was conferred upon them by the Emperor Charles V in the year 1530. The earlier period of their rule was the golden age of the history of the island, for during that time Malta was one of the chief bulwarks of Christendom against the power of the Turks. The successful defence of the island by the Grand Master La Vallette, in 1565, ranks as high as the Battle of Lepanto among the feats of Christian chivalry. The invaders, numbering over 40,000 men, must have considerably outnumbered the total population of the island which contained but 8500 men bearing arms, including the 592 members of the order. Yet such was the spirit which the brave islanders imbibed from their leaders that they compelled the enemy to retire, with heavy loss, after a siege of nearly four months.

The decline of the Ottoman power meant the decay of the Order of St. John. By the end of the eighteenth century, so rife was the spirit of the Revolution, so powerful the clique of traitors among the Knights, and so great the disaffection of the people, that, when Napoleon Bonaparte appeared before Malta in June, 1798, he found that there was little left for him to do but to take quiet possession of the island. After a few days' sojourn, during which he drew up a new scheme of government and made French the national language, he departed on his fatal expedition to Egypt, carrying with him a great part of the loot which, to the value of £250,000, had been taken from the churches and palaces of Malta.

Shortly after his departure the French garrison, cut off by Nelson's fleet from all chance of reinforcements, was shut up in Valetta by the Maltese who were aided, at the last, by English and Neapolitan troops, and was compelled to surrender in September, 1800, after a siege of two years. Immediately after this event the Maltese, who had no reason for desiring the return of the Knights and still less of falling into the power of France or Russia, offered to place the island under the protection of the British flag. The offer was accepted on the distinct understanding that their religion and institutions should be respected. The British sovereignty was confirmed at the treaty of Paris (1814). The population of Malta and Gozo was over 25,000 in 1535; over 40,000 in 1621; 54,463 in 1632, and 114,000 in 1798. Since this last date it has nearly doubled.

Valetta, an important fortress and beautiful city, capital of the island of Malta. The city was founded by John Parisot de la Valette, who so gallantly defended the island of Malta against the Turkish fleet in 1565. Alone and unsupported by any of the Christian powers, La Valette held the island under circumstances of great difficulty and distress; and at the end of four months the Turks were compelled to withdraw, after suffering a loss of several thousand men. The city contains many relics of the occupation by the Knights of Malta. Population 60,000.

Population. Owing to the prosperity consequent upon its important position, the island is able to support a population out of all proportion to its size. The estimated civil population of the islands was 205, 059 on 1 April, 1906. If about 18,000 be added for the garrison and the Royal Navy, we reach a total of over 223,000. Without reckoning the fluctuating population of the harbours, the density of the population in Malta itself works out at over 2000 persons per sq. mile. Of the civil population over 99% are Catholics.

In 1901 there were in the civil population 696 lunatics, 418 blind, 80 lepers, 211 lawyers, and 190 doctors. In the same year the secular clergy consisted of 698 priests and 251 clerics; the regular clergy of 249 priests, 151 clerics and novices, and 140 lay brothers. There were 470 religious women including novices and lay-sisters. In Malta and Gozo there are 27 religious houses of men and 36 convents and institutes of religious women. There are about 190 schools, in which some 20,000 persons are being educated. Besides the university (about 120 students), the Lyceum (400), and 79 government elementary schools, there are 53 other government schools, 2 seminaries (312), 22 schools under religious direction, the rest under the direction of private individuals. The overflow of the population is mainly to other Mediterranean ports. In 1901, 33,948 Maltese returned as residing in countries bordering on the Mediterranean. Of these, 15,208 were in Tunis and 6984 in Egypt.