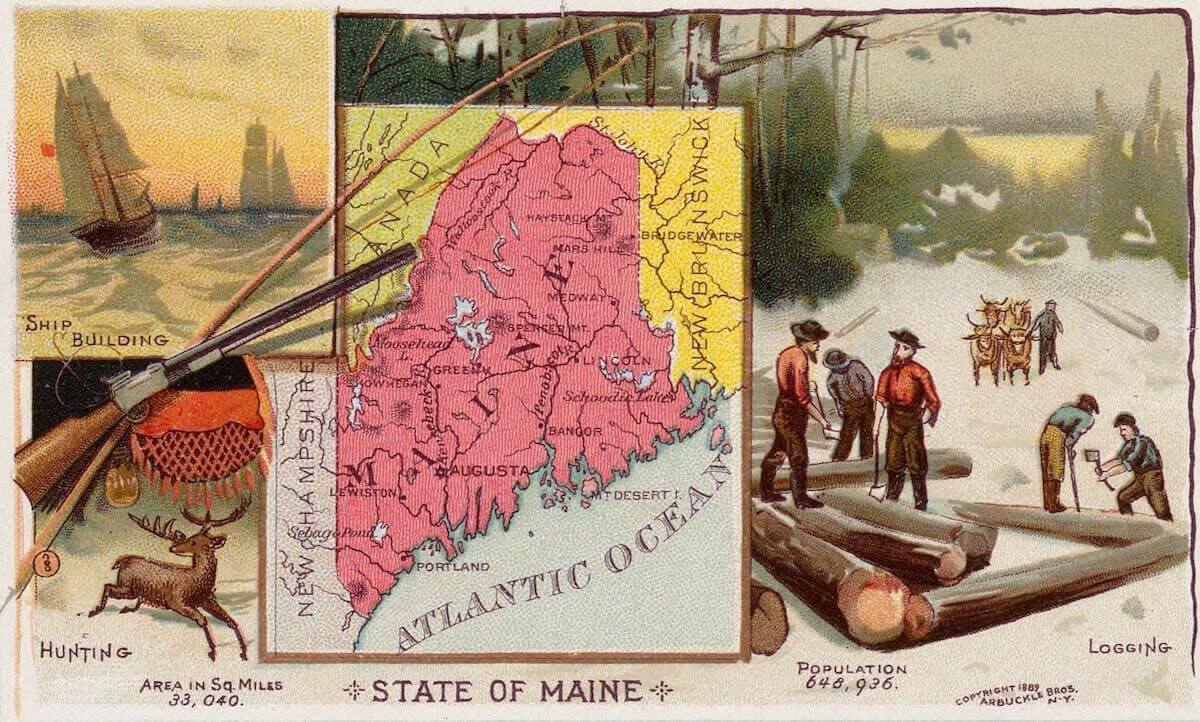 Maine, the nation's sunrise portal, situated in the northeastern corner of our land, can boast as early discovery and settlement as any part of North America. It was called Maine because thought to be the “mayne” land of New England. It is the most northeasterly state, and is bounded on the north and east by New Brunswick, on the south and east by the Atlantic, on the west by New Hampshire and on the northwest and north by Quebec. Its extreme length is 350 miles, its width 225, and its total area 33,000 square miles, the land-surface being 29,895 square miles. Maine has a coast of about 225 miles, but the numerous indentations of the sea make a tide-line of not less than 2,500 miles. It has been aptly called “hundred-harbored Maine” by Whittier.

It is more than a tradition that the Northmen visited the coast. The Cabots, sent out by England in 1497-8, crossed the Gulf of Maine during their first voyages. Verrazano sailed along the coast in 1524, and was so pleased with the grandeur and beauty of the region now known as New England that he called it New France. The coast was visited and explored by Gomez in 1525; by Rut, an Englishman, in 1527; by Andre Thevet, a French Roman Catholic priest, in 1556; by Pring, sent out by England, in 1603; and in the same year by De Monts, who took possession of the land in the name of France.

In 1605 Weymouth landed at the island known as Monhegan, and took possession of the country in the name of James I of England. In 1607 Captain Raleigh Gilbert landed at what now is Pemaquid and made a settlement at Phippsburg, but this had a brief existence. The second colony established by the English was founded in 1616 near Biddeford, and numerous settlements followed in 1623. French explorers made a settlement on Mt. Desert Island in 1613. Settlements were also made about this time on York and Kennebec Rivers.

In 1614-15 Captain John Smith visited the shores of Maine, and published a brief description and a map of the country and named it New England. In 1650 the territory was under six governments, and the colonists being weary of the strife fostered by these unnatural conditions called on Massachusetts for aid and finally came under its control. In 1742 the population had increased to 12,000. The settlements mostly were along the shores and near the rivers. In 1790 the population was 96,540. In 1785 the people asked for separation from Massachusetts. This was finally granted in 1819, and in 1820 Maine was admitted as a state. It was the first state to pass a prohibitory law. The boundary line between the British possessions and Maine caused a long dispute, but in 1842 it was finally settled.

Climate. The climate, though cooler than might be expected from its latitude, is not severe. The summer heat is tempered by sea-breezes and cool winds from the north. The cold of winter has a constancy which makes it less severely felt than the changing temperatures of more southern sections. The average winter temperature is 20°. The summers are short, less than five months between frosts, even in the southern part, but the thermometer sometimes rises for a few days to 100°. The average summer heat is 62°. The lakes and forests attract great numbers of tourists, and the sea coast is lined with the cottages of summer-residents from all parts of the country. Some of these resorts, notably Bar Harbor, Old Orchard and York Beaches and the islands in Casco Bay are among the most popular and fashionable ones in the country.

Minerals. The fact that the surface is made up of the bases of two mountain ranges explains the great variety of minerals found in the hills of Maine. Granite is abundant in the western portion, and a belt of the same rocks extends along the coast and for miles inland. The convenience of transportation is a large factor in giving Maine the second rank in this product. The best-known minerals are red, gray, white and dark granite, feldspar, quartz, mica, limestone, marble and tourmaline. The crystalline rocks produce many rare gems. Iron, copper, silver, gold, tin and manganese are found in small quantities. The higher portion of the surface has a thin and rocky soil and is unproductive. Along the river valleys and in the region of the lakes the soil is fertile.

Forests. One of the most valuable of Maine's natural resources is her extensive forests. The whole northern portion is covered with trees, and is the great timber-producing area. The many lakes and rivers render it peculiarly adapted to lumbering. In these forests are found pine, spruce, hemlock, fir, rock and white maple, oak, white, yellow and gray birch, beech, cedar, black larch, cherry, bass-wood, white and brown ash, poplar, elm and chestnut. Fruit-trees are abundant. Apples, pears and plums are extensively grown. Grapes, gooseberries, raspberries, blackberries and strawberries are plentiful.

Animals. There are many varieties of wild animals. The bear, moose, caribou, deer, wolf and wild-cat live in the dense forests, and the beaver, sable, mink, squirrel, fox, raccoon, porcupine and marten are trapped by the hunters.

Fisheries. In value and extent of sea-fisheries Maine stands second only to Massachusetts, while in importance of her freshwater fishing she has no equal. Bangor has one of the finest salmon-pools in the world. Large quantities of lobsters, clams and sardines are taken for canning purposes, while hundreds of vessels are engaged in cod and mackerel fishing. The state fish-commissioners have been engaged for years in restocking the lakes and rivers with choicest fish. During the open seasons sportsmen come from far and near to hunt in the forests and fish in the lakes and streams.

Agriculture. The land-surface comprises 19,132,800 acres, an area equal to all the other New England states. While Maine does not claim to be a great agricultural state, yet her broad acres furnish many home-farms, where her people live in comfort and prosperity. Not a few of our best men and women trace their strength of purpose and sturdiness of frame to the training received on “the old farm.” The most important agricultural products are hay, potatoes, oats, sweet corn, butter, cheese, apples and wool.

Surface. The surface is broken, there being several mountain-ranges in the north and west and some large peaks, as Mt. Katahdin, 5,385 feet high, Saddleback Mountain 4,004 feet and Mt. Baker 3,589 feet. The general slope of the land is from an extreme elevation of 2,000 feet on the west to 600 feet on the east. The beaches, marshes and low, grassy islands on the coast are rarely found east of Kennebec River. Beyond the mouth of this river the shore becomes bolder, rising in precipitous cliffs and rounded summits.

Drainage. Two drainage-slopes stretch north and south from a watershed which crosses the state in an easterly and westerly direction, making the general flow of the rivers south, southeast and north and northeast. The largest rivers are the Penobscot, Kennebec, Androscoggin and Saco of the southern slope and the St. John and St. Croix of the northern. The rivers are navigable only for a few miles, and therefore are of but little value in commerce. Their sources are at a high elevation, and consequently are great sources of water-power. More than 2,656,200 horse-power is available on the rivers. This force is equivalent to the working energy of 34,000,000 men, laboring 24 hours a day every day throughout the year.

The lakes among the hills and mountains number 1,570, with an aggregate area of 2,300 square miles, and are of great natural beauty. The most noted are Moosehead Lake, the Rangeley Lakes and Chesuncook Lake. The lakes are nearly all connected with the river-systems.

Manufactures. Manufactures are being rapidly developed. The largest paper-mills are located at Cumberland Mills, Rumford Falls and Millinocket. The chief center of the boot and shoe industry is in Auburn. Cotton-goods are extensively manufactured in Lewiston, Biddeford and Waterville. In many of the villages woolen mills and factories for the manufacture of household utensils and toys are found. Maine granite is known and valued throughout the country. It is used for almost every purpose, from the paving-block to the choicest statuary. Large quantities of lumber are produced. The manufacture of starch from potatoes is an important industry in Aroostook County. There are 50 of these factories, and 2,000,000 bushels of potatoes are used annually. The Kennebec is the center of the great ice-industry.

Education. Education of the youth has always been dear to the people, and there is a strong sentiment in favor of the public schools. The quality of blood which they received from their ancestors and the training they had in “the little red school-house” or its more pretentious companion developed a body of men and women of such character that they have not only reflected credit upon Maine, but have done a large share of the intellectual work of America. As early as 1794 a charter was obtained for the establishment of Bowdoin College at Brunswick. Colby, the second college established in the state, was opened in 1818. It was first incorporated as Maine Literary and Theological Institution, Waterville. Bates College at Lewiston grew out of Maine Seminary, which was chartered in 1855.

The college was opened in 1863, and a charter was granted in 1864. It was the pioneer of co-education in New England. The Maine College of Agriculture and the Mechanic Arts was established in 1862, and in 1866 the college was located at Orono on a farm of 375 acres. By act of the legislature in 1897 the name of the institution became the University of Maine. There are six state normal schools which send out over 200 teachers yearly. These schools are at Farmington, Castine, Gorham, Presque Isle, Ft. Kent and Machias. There are about 60 academies, seminaries and institutes.

The larger towns, villages and cities maintain about 178 free high-schools of standard grade. The state appropriates over $875,000 each year for instruction in the public schools. This is supplemented by a still larger sum in the various municipalities. The aggregate of these two amounts to more than $2,000,000. There are 213,123 children of school age. The enrollment was 132,592 and the average attendance was 113,960. There are 4,600 schools and 5,000 teachers. The population is increasing slowly by immigration from Canada and Sweden. The census of 1910 gives a population of 742,371. The principal cities are Portland, Lewiston (of which Auburn is practically a part), Bangor, Bath, Augusta, Biddeford and Waterville. See Abbott's History of Maine.