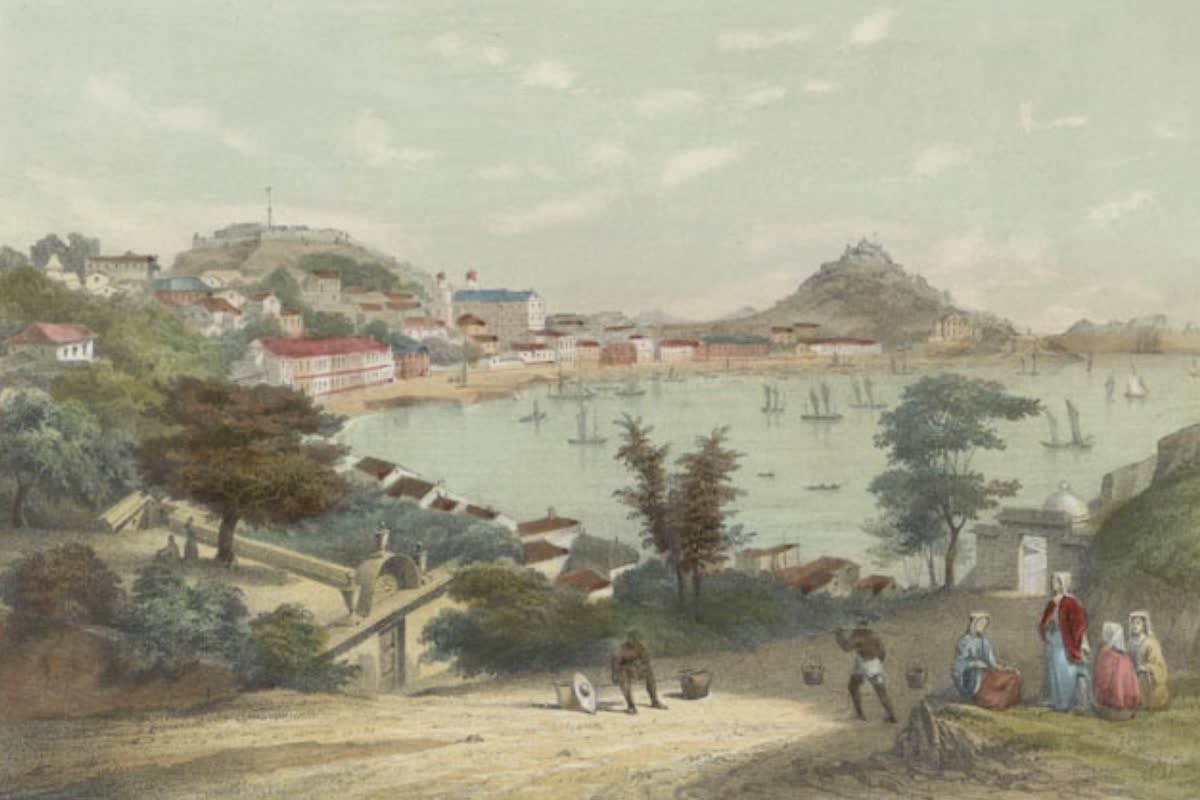 Bold and rocky hills about 300 ft. high occupy both extremities of the peninsula, the picturesque city, with its flat-roofed houses painted blue, green and red, lying in the undulating ground between. The forts are effective additions to the general view, but do not add much to the strength of the place. Along the east side of the peninsula runs the Praya Grande, or Great Quay, the chief promenade in Macao, on which stand the governor’s palace, the administrative offices, the consulates and the leading commercial establishments.

The church of St Paul (1594-1602), the seat of the Jesuit college in the 17th century, was destroyed by fire in 1835. The Hospital da Misericordia (1569) was rebuilt in 1640. The Camoens grotto, where the exiled poet found leisure to celebrate the achievements of his ungrateful country, lies in a secluded spot to the north of the town, which has been partly left in its native wildness strewn with huge granite boulders and partly transformed into a fine botanical garden. During the south-west (summer) monsoon great quantities (67 in.) of rain fall, especially in July and August. The mean temperature is 74.3° F.; in July, the hottest month, the temperature is 84.2°; in February, the coldest, it is 59°. On the whole the climate is moist. Hurricanes are frequent.

Of the Portuguese inhabitants more than three-fourths are natives of Macao—a race very inferior in point of physique to their European ancestors. Macao is connected with Hong-Kong by a daily steamer. Being open to the south-west sea breezes, it is a favourite place of resort from the oppressive heat of Hong-Kong. It is ruled by a governor, and, along with Timor (East Indies), constitutes a bishopric, to which belong also the Portuguese Christians in Malacca and Singapore. Though most of the land is under garden cultivation, the mass of the people is dependent more or less directly on mercantile pursuits; for, while the exclusive policy both of Chinese and Portuguese which prevented Macao becoming a free port till 1845-1846 allowed what was once the great emporium of European commerce in eastern Asia to be outstripped by its younger and more liberal rivals, the local, though not the foreign, trade of the place is still of very considerable extent.

Since the middle of the 19th century, indeed, much of it has run in the most questionable channels; the nefarious coolie traffic gradually increased in extent and in cruelty from about 1848 till it was prohibited in 1874, and much of the actual trade is more or less of the nature of smuggling. The commodities otherwise mostly dealt in are opium, tea, rice, oil, raw cotton, fish and silk. The total value of exports and imports was in 1876-1877 upwards of £1,536,000. In 1880 it had increased to £2,259,250, and in 1898 to £3,771,615. Commercial intercourse is most intimate with Hong-Kong, Canton, Batavia and Goa. The preparation and packing of tea is the principal industry in the town. In fishing a large number of boats and men are employed.

In 1557 the Portuguese were permitted to erect factories on the peninsula, and in 1573 the Chinese built across the isthmus the wall which still cuts off the barbarian from the rest of the island. Jesuit missionaries established themselves on the spot; and in 1580 Gregory XIII. constituted a bishopric of Macao. A senate was organized in 1583, and in 1628 Jeronimo de Silveira became first royal governor of Macao. Still the Portuguese remained largely under the control of the Chinese, who had never surrendered their territorial rights and maintained their authority by means of mandarins—these insisting that even European criminals should be placed in their hands. Ferreira do Amaral, the Portuguese governor, put an end to this state of things in 1849, and left the Chinese officials no more authority in the peninsula than the representatives of other foreign nations; and, though his antagonists procured his assassination (Aug. 22), his successors succeeded in carrying out his policy.

Although Macao is de facto a colonial possession of Portugal, the Chinese government persistently refused to recognize the claim of the Portuguese to territorial rights, alleging that they were merely lessees or tenants at will, and until 1849 the Portuguese paid to the Chinese an annual rent of £71 per annum. This diplomatic difficulty prevented the conclusion of a commercial treaty between China and Portugal for a long time, but an arrangement for a treaty was come to in 1887 on the following basis: (1) China confirmed perpetual occupation and government of Macao and its dependencies by Portugal; (2) Portugal engaged never to alienate Macao and its dependencies without the consent of China; (3) Portugal engaged to co-operate in opium revenue work at Macao in the same way as Great Britain at Hong-Kong. The formal treaty was signed in the same year, and arrangements were made whereby the Chinese imperial customs were able to collect duties on vessels trading with Macao in the same way as they had already arranged for their collection at the British colony of Hong-Kong. For a short time in 1802, and again in 1808, Macao was occupied by the English as a precaution against seizure by the French.

There are no works available for the Macau collection.