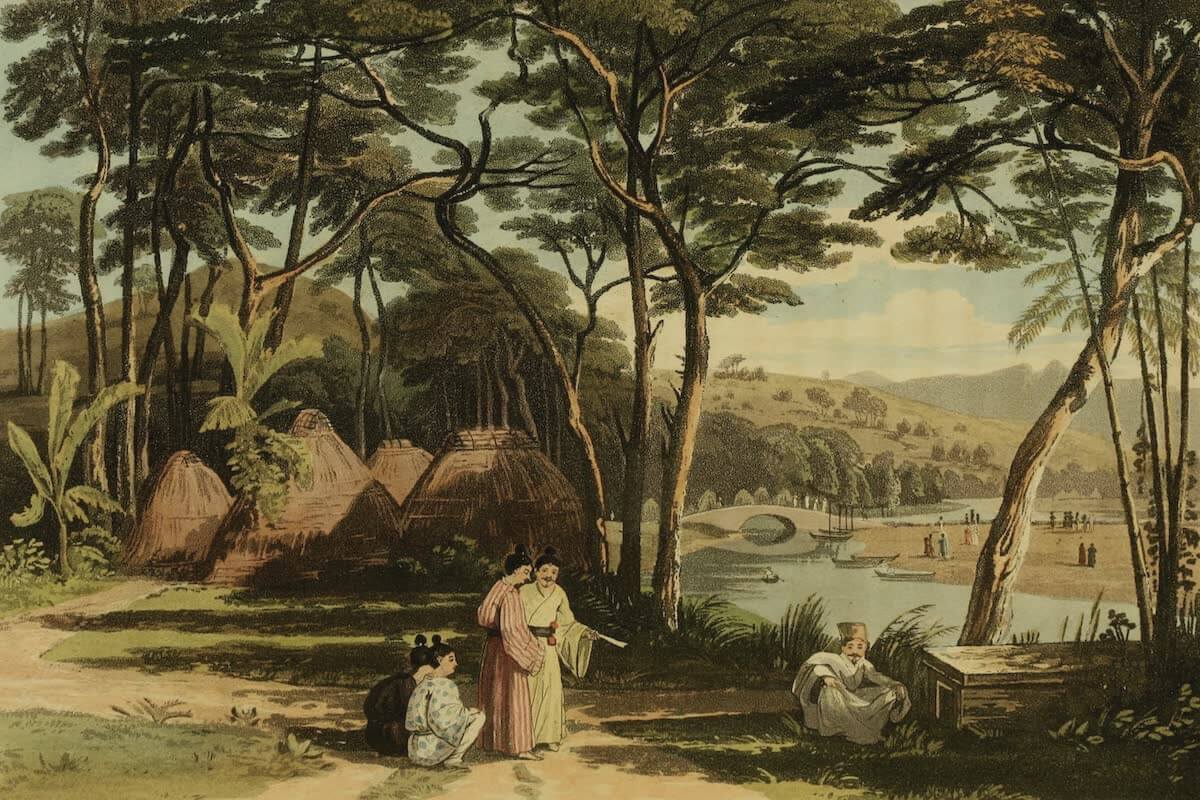 KOREA, a former empire in Asia, since 1910 a part of the Japanese Empire comprising the peninsula lying between the Yellow Sea and the Sea of Japan, and separated by the Strait of Korea from the Japanese Islands. It has a coast line of about 1,740 miles, and a total area of about 90,000 square miles. The N. boundary line is formed by the river Tu-man flowing N. E., and the Amnok flowing S. W. from the watershed of Paik-to-san. The Tu-man, for the last 5 miles of its course, separates Russian Asia from Korea. A belt of land, 5,600 square miles, on the N. side has for the last three centuries been constituted a neutral zone between Korea and Manchuria, but is now being gradually encroached upon from both the Chinese and Korean side.

The earliest records of Korea go back to 1122 B. C., when Ki-tze with 5,000 Chinese colonists brought to Korea Chinese arts and politics. Almost the first knowledge of Korea obtained by Europe was through the shipwreck of some Dutchmen on the coast in 1653. The missionary De Cespedes had, however, entered Korea at the end of the 16th century, and from 1777 other missionaries followed.

In 1835 Maubant gained a footing in Korea, but in 1866, after thousands of converts had been put to death, the only three Catholic missionaries left had to flee for their lives. Japan was the first to effect a footing in Korea in 1876, when a treaty was concluded between the two countries. Korea followed this up by treaties with China and the United States in 1882; with Germany and Great Britain, 1883; with Italy and Russia, 1884; and with France, 1886.

The three ports opened to foreign trade are Chemulpo, Fusan, and Gen-san. The new policy has led to discontent; and there was an insurrection in 1884. The suzerainty of China had been acknowledged by Korea from early times, but Japan protested, and this was one of the alleged causes of the Japanese-Chinese War of 1894. China renounced her claim in 1895 and Japan began to display an active interest in Korea. Russia thereupon asserted her right to a voice in Korean affairs, and by 1901 the rival interests of the two powers caused a straining of their relations. In April, 1903, Russian activity on the Yalu River, on the boundary between Korea and Manchuria, attracted Japan's special attention.

All concessions granted to Russia were nullified by the Korean King, under pressure of Japanese influence. Still the Russians managed to secure a foothold at Yongampho, and in October built a fort at that place. This aroused Japan to greater activity, and Korea became the principal bone of contention that led to the Russo-Japanese War. After the beginning of hostilities, in February, 1904, Japan took possession of Seoul, the capital, expelled the Russian minister, and virtually established a protectorate over the kingdom. Japan landed her troops at various points on the Korean coast, and northern Korea became the scene of Japan's land operations, and the Japanese army was finally mobilized on the Yalu. On April 15, 1904, the royal palace at Seoul was burned to the ground.

In 1907 Prince Ito assumed charge of Korea's foreign affairs. Japan's attempts to disarm Korea's soldiery led to two years fighting, in which thousands were killed. A Korean Independence Association was formed in China and appealed to the Paris Peace Conference. Disorders and riots in 1919 were sternly suppressed by the Japanese Government. In 1920, it was stated that the Korean Nationalists had appealed to the Russian Soviet Republic for help against Japan.

Occupying about the same latitude as Italy, Korea is also like Italy hemmed in on the N. by Alpine ranges, and traversed from N. to S. by a branch chain. From the N. the chain runs close to the coast, till, about the 37th parallel, it trends inland. The climate is healthful, bracing in the N., but colder in winter and hotter in summer than in corresponding European latitudes. Various kinds of timber trees abound, except in the W., where wood is scarce.

The fauna is very considerable, and besides tigers, leopards, deer, includes pigs, tiger-cats, badgers, foxes, beavers, otters, martens, and a great variety of birds. Among the products are rice, wheat, beans, cotton, hemp, maize, millet, sesame, perilla. Ginseng grows wild in the Kange Mountains, and is also much cultivated about Kai-song. The cattle are excellent (the bull being the usual beast of burden), the ponies very small but hardy, fowls good, pigs inferior. Iron ores of excellent quality are mined; and there are copper mines. The output of silver is small. Gold to the value of $500,000 has been exported in one year. Three-fourths of the trade is with Japan, and over a fifth with China.