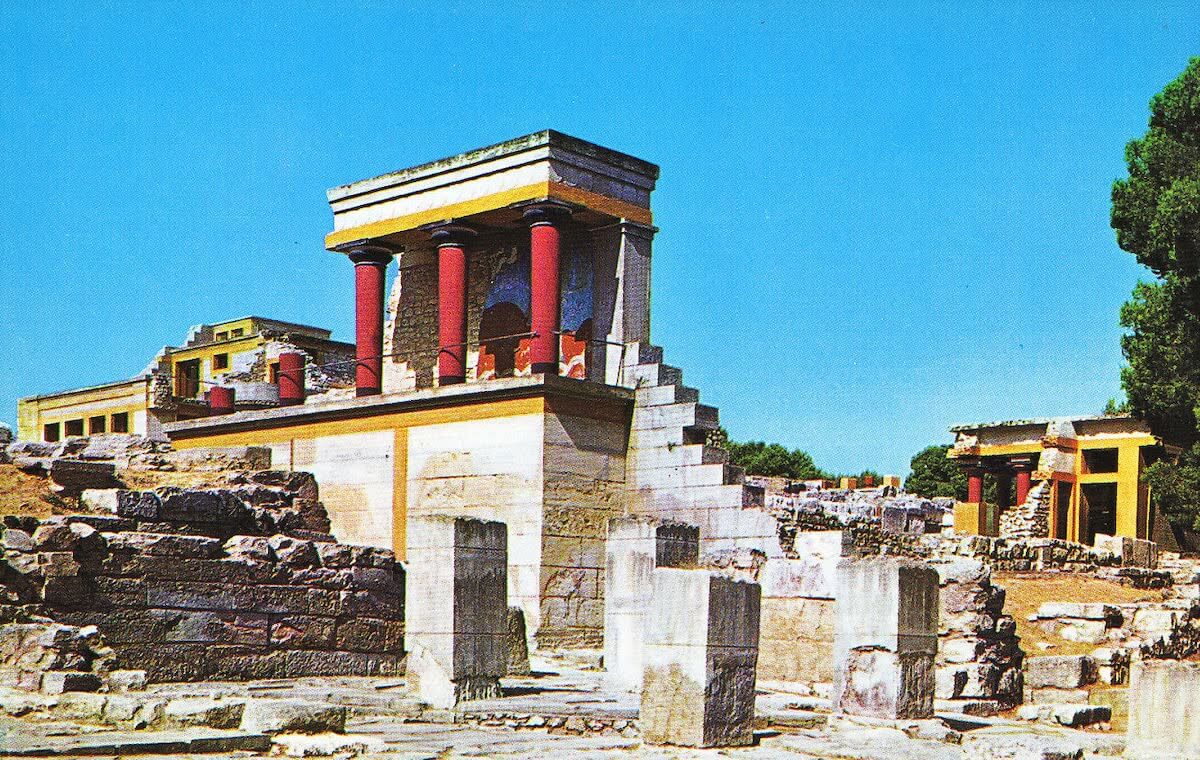 Knossos, Cnossus, or Gnossus is an ancient city of Crete, on the left bank of the Caeratus, a small stream which falls into the sea on the north side of the island. The city was situated about 3 m. from the coast, and, according to the old traditions, was founded by Minos, king of Crete.

The locality was associated with a number of the most interesting legends of Greek mythology, particularly with those which related to Jupiter, who was said to have been born, to have been married, and to have been buried in the vicinity. Knossos was also assigned as the site of the labyrinth in which the Minotaur was confined. The truth behind these legends has been revealed in recent years by the excavations of Dr Evans.

As the historical city was peopled by Dorians, the manners, customs and political institutions of its inhabitants were all Dorian. Along with Gortyna and Cydonia, it held for many years the supremacy over the whole of Crete; and it always took a prominent part in the civil wars which from time to time desolated the island. When the rest of Crete fell under the Roman dominion, Knossos shared the same fate, and became a Roman colony. Aenesidemus, the sceptic philosopher, and Chersiphron, the architect of the temple of Diana at Ephesus, were natives of Knossos.

The chief building is the Great Palace, the so-called "House of Minos," the excavation of which by Arthur Evans dates from 1900: a number of rooms lying round the central paved court, oriented north and south, have been identified, among them being the throne-room with some well-preserved wall paintings and a small bathroom attached, in the north-west quarter a larger bathroom and a shrine, and residential chambers in the south and east. The latter part of the palace is composed of a number of private rooms and halls, and is especially remarkable for its skillful drainage and water-supply systems.

In 1907 excavations on the south side of the palace showed that the plan was still incomplete, and a southern crypto-porticus, and outside it a large south-west building, probably an official residence, were discovered. Of special interest was a huge circular cavity under the southern porch into which the sub-structures of the palace had been sunk. This cavity was filled with rubbish, sherds, &c., the latest of which was found to date as far back as the beginning of the Middle Minoan age, and the later work of 1908 only proved (by means of a small shaft sunk through the débris) that the rock floor was 52 ft. below the surface. The first attempt to reach the floor by a cutting in the hill-side proved abortive, but the operations of 1910 led to a successful result. The cavity proved to be a great reservoir approached by a rock-cut staircase and of Early Minoan date.

In 1904-1905 a paved way running due west from the middle of the palace was excavated, and found to lead to another building described as the "Little Palace" largely buried under an olive grove. The first excavations showed that this building was on the same general plan and belonged to the same period as the "House of Minos," though somewhat later in actual date (17th century B.C.). Large halls, which had subsequently been broken up into smaller apartments, were found, and among a great number of other artistic remains one seal-impression of special interest showing a one-masted ship carrying a thorough-bred horse—perhaps representing the first importation of horses into Crete.

A remarkable shrine with fetish idols was also discovered. The sacred Double-Axe symbol is prominent, as in the greater palace. By the end of 1910 the excavation of this smaller palace was practically completed. It was found to cover an area of more than 9400 ft. with a frontage of more than 130 ft., and had five stone staircases. One object of special interest found in the course of excavation is a black steatite vessel in the form of a bull’s head. The modeling is of a very high order, and the one eye which remains perfect is cut out of rock crystal, with the pupil and iris marked by colors applied to the lower face of the crystal.

The work of excavation in the palace has been complicated by the necessity of propping up walls, floors and staircases. In some instances it has been found necessary to replace the original wooden pillars by pillars of stone. Again in the "Queen’s Megaron" in the east wing of the Great Palace it was found that the exposure of the remains to the violent extremes of Cretan weather must soon prove fatal to them. It was therefore decided to restore the columns and part of the wall, and to roof over the whole area.