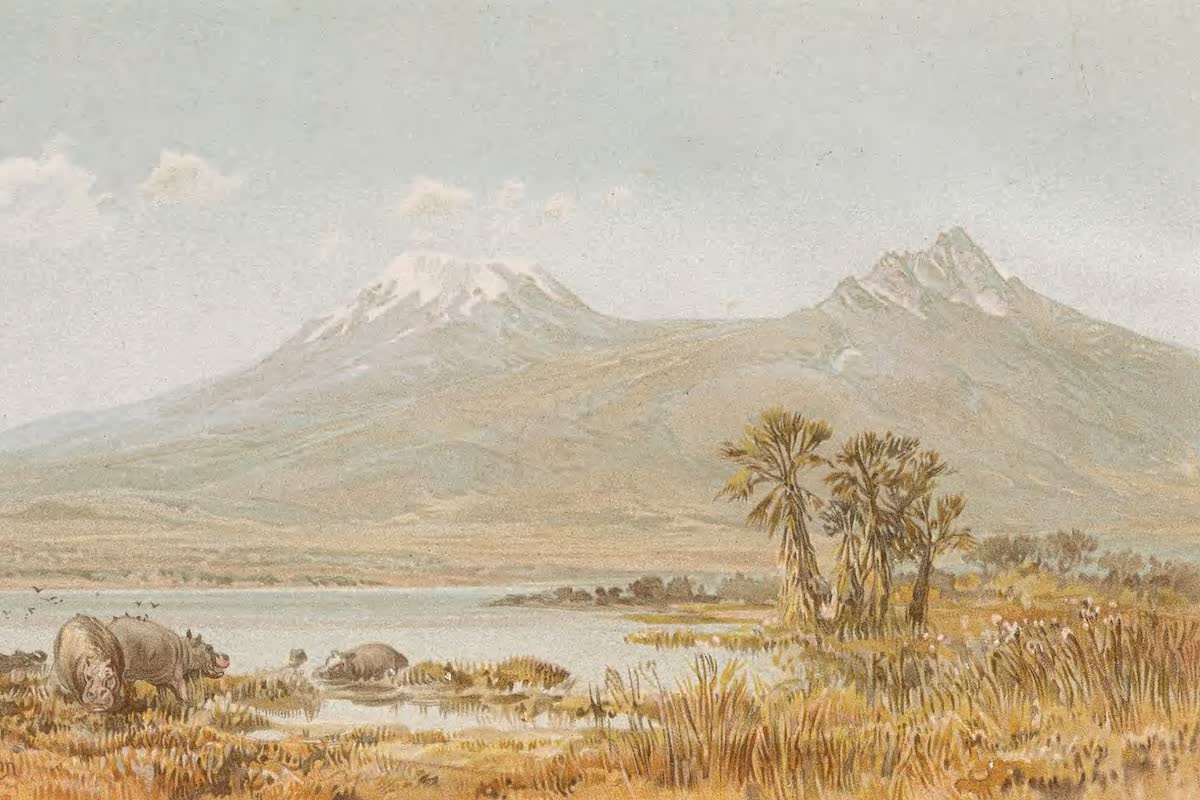 Kilimanjaro is a great mountain in East Africa, its centre lying in 3° 5' S. and 37° 23' E. It is the highest known summit of the continent, rising as a volcanic cone from a plateau of about 3000 ft. to 19,321 ft. Though completely isolated it is but one of several summits which crown the eastern edge of the great plateau of equatorial Africa. About 200 m. almost due north, across the wide expanse of the Kapte and Kikuyu uplands, lies Mount Kenya, somewhat inferior in height and mass to Kilimanjaro; and some 25 m. due west rises the noble mass of Mount Meru.

The major axis of Kilimanjaro runs almost east and west, and on it rise the two principal summits, Kibo in the west, Mawenzi (Ki-mawenzi) in the east. Kibo, the higher, is a truncated cone with a nearly perfect extinct crater, and marks a comparatively recent period of volcanic activity; while Mawenzi (16,892 ft.) is the very ancient core of a former summit, of which the crater walls have been removed by denudation. The two peaks, about 7 m. apart, are connected by a saddle or plateau, about 14,000 ft. in altitude, below which the vast mass slopes with great regularity in a typical volcanic curve, especially in the south, to the plains below. The sides are furrowed on the south and east by a large number of narrow ravines, down which flow streams which feed the Pangani and Lake Jipe in the south and the Tsavo tributary of the Sabaki in the east. South-west of Kibo, the Shira ridge seems to be of independent origin, while in the north-west a rugged group of cones, of comparatively recent origin, has poured forth vast lava-iiows. In the south-east the regularity of the outline is likewise broken by a ridge running down from Mawenzi.

The lava slopes of the Kibo peak are covered to a depth of some 200 ft. with an ice-cap, which, where ravines occur, takes the form of genuine glaciers. The crater walls are highest on the south, three small peaks, uncovered by ice, rising from the rim on this side. To the central and highest of these, the culminating point of the mountain, the name Kaiser Wilhelm Spitze has been given. The rim here sinks precipitously some 600 ft. to the interior of the crater, which measures rather over 2000 yds. in diameter, and is in part covered by ice, in part by a bare cone of ashes. On the west the rim is breached, allowing the passage of an important glacier formed from the snow which falls within the crater. Lower down this cleft, which owed its origin to dislocation, is occupied by two glaciers, one of which reaches a lower level (13,800 ft.) than any other on Kilimanjaro. On the north-west three large glaciers reach down to 16,000 ft.

Mawenzi peak has no permanent ice-cap, though at times snow lies in patches. The rock of which it is composed has become very jagged by denudation, forming stupendous walls and precipices. On the east the peak falls with great abruptness some 6500 ft. to a vast ravine, due apparently to dislocation and sinking of the ground. Below this the slope is more gradual and more symmetrical. Like the other high mountains of eastern Africa, Kilimanjaro presents well-defined zones of vegetation. The lowest slopes are arid and scantily covered with scrub, but between 4000 and 6000 ft. on the south side the slopes are well watered and cultivated. The forest zone begins, on the south, at about 6500 ft., and extends to 9500, but in the north it is narrower, and in the north-west, the driest quarter of the mountain, almost disappears. In the alpine zone, marked especially by tree lobelias and Senecio, flowering plants extend up to 15,700 ft. on the sheltered south-West flank of Mawenzi, but elsewhere vegetation grows only in dwarfed patches beyond 13,000 ft. The special fauna and flora of the upper zone are akin to those of other high African mountains, including Cameroon. The southern slopes, between 4000 and 6000 ft., form the well-peopled country of Chaga, divided into small districts.

As the natives believe that the summit of Kilimanjaro is composed of silver, it is conjectured that Aristotle's reference to "the so-called Silver Mountain" from which the Nile flows was based on reports about this mountain. It is possible, however, that the "Silver Mountain" was Ruwenzori, from whose snow-clad heights several head streams of the Nile do descend. It is also possible, though improbable, that Ruwenzori and not Kilimanjaro nor Kenya may be the range known to Ptolemy and to the Arab geographers of the middle ages as the Mountains of the Moon. Reports of the existence of mountains covered with snow were brought to Zanzibar about 1845 by Arab traders. Attracted by these reports Johannes Rebmann of the Church Missionary Society journeyed inland from Mombasa in 1848 and discovered Kilimanjaro, which is some 200 m. inland.

Rebmann's account, though fully borne out by his colleague Dr Ludwig Krapf, was at first received with great incredulity by professional geographers. The matter was finally set at rest by the visits paid to the mountain by Baron Karl von der Decken (1861 and 1862) and Charles New (1867), the latter of whom reached the lower edge of the snow. Kilimanjaro has since been explored by Joseph Thomson (1883), Sir H. H. Johnston (1884), and others. t has been the special study of Dr Hans Meyer, who made four expeditions to it, accomplishing the first ascent to the summit in 1889. In the partition of Africa between the powers of western Europe, Kilimanjaro was secured by Germany (1886) though the first treaties concluded with native chiefs in that region had been made in 1884 by Sir H. H. Johnston on behalf of a British company. On the southern side of the mountain at Moshi is a German government station.