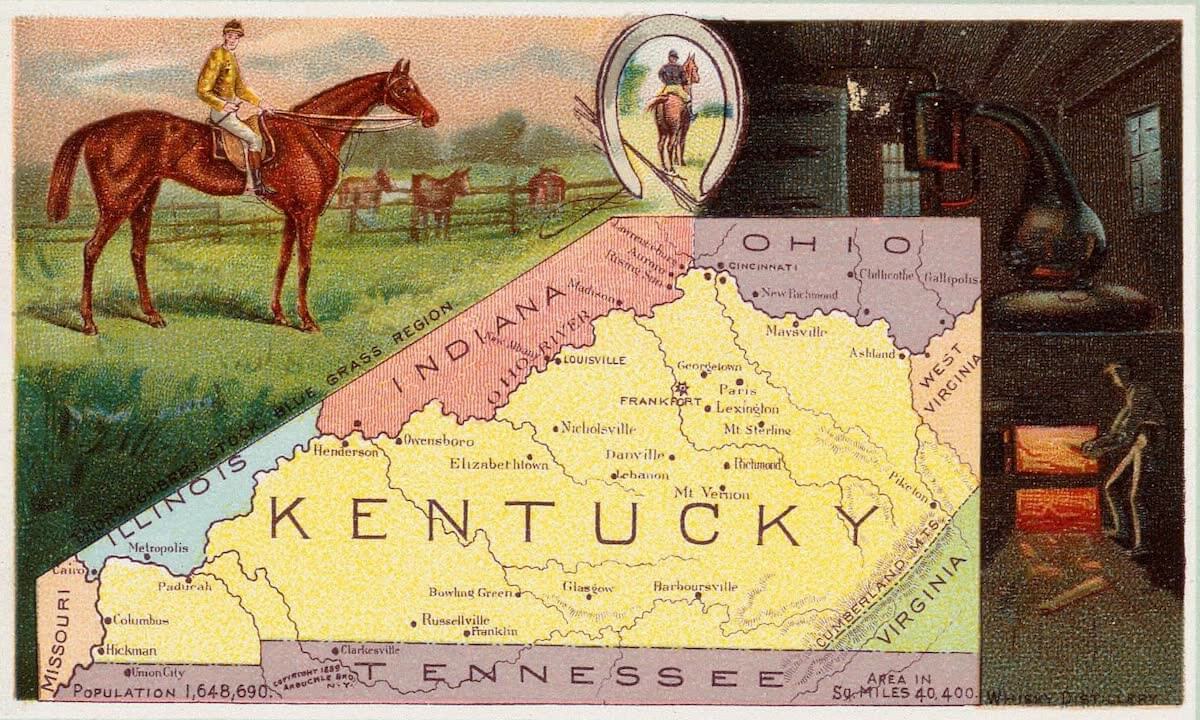 Kentucky is one of the central states in the east of the United States. It is bounded on the north by Illinois, Indiana and Ohio, on the east by West Virginia and Virginia, on the south by Tennessee and on the west by Missouri. Its extreme length from east to west is about 350 miles, and its greatest width from north to south is 170 miles, the area being 40,400 square miles. Kentucky is divided into three distinct portions — the mountainous regions of the east comprising about one eighth of the state; central Kentucky comprising about three eighths, and western Kentucky comprising the remainder.

Kentucky originally was a part of Virginia, and was explored and settled principally by emigrants from Virginia and North Carolina. For many years it was the hunting-ground of the Indians north of the Ohio River and south of Tennessee. It took years of strife and bloodshed to win it from the Indians. It was admitted into the Union in 1792 — the fifteenth state. Kentuckians have acted a conspicuous part in national and state affairs, and in the War of 1812, the war with Mexico, the Civil War and the Spanish War her sons stood abreast of the soldiers and patriots of any other state. The population is 2,289,905, fifteen per cent. being African-American.

Drainage. In and around the state Kentucky has a greater number of miles of navigable streams than any other state, a total of about 2,000 miles. On the east it is separated by the Big Sandy from West Virginia, on the north from Ohio, Indiana and Illinois by the Ohio River, and on the west from Missouri by the Mississippi River. The other navigable streams are the Tennessee, Cumberland, Kentucky (on which is situated Frankfort the capital), Green (a beautiful stream passing near the entrance of the famous Mammoth Cave), Licking, Barren and Trade Water Rivers. The Kentucky is noted for beautiful and picturesque scenery.

Surface. The 32 counties that compose the eastern region are covered with mountains from 600 to 2,500 feet in height. Between these ranges are many streams flowing through narrow though rich valleys. The wealth of this section consists mainly in inexhaustible supplies of minerals of various kinds. Central Kentucky is composed of rich limestone soil — not very level but sufficiently so to make it ideal farming land. Its natural drainage is almost perfect, so much so that there is very little swamp to be found. The continual disintegration of the limestone rock keeps the soil fertile. The surface of western Kentucky is generally level, intersected, however, by numerous creeks and small rivers.

Climate. In the lowlands along the Mississippi there is more or less malaria. The other districts are remarkably salubrious, the death-rate being exceptionally low. Statistics show that Kentuckians stand superior and at the top in size and strong physical characteristics. The temperature rarely reaches zero or goes higher than 90°. The average annual rainfall is 48 inches.

Soil. The lands along the many rivers are alluvial, the soil on some of the streams being from four to ten feet deep, notably in the Ohio and the Mississippi river-bottoms. Much of this is overflowed annually in the winter, from which deposits of rich soil are left, so that the fertility is inexhaustible. On many of these bottoms corn has been grown annually for 50 years without any diminution in production. The upland limestone section, including the famous Blue Grass soil, and a large portion of western Kentucky also are fertile, and are kept so from the yearly disintegration of the limestone and phosphatic shale which is very abundant and near the surface. Farms a century old, that have been properly managed, show no signs of exhaustion and do not require artificial fertilizers. This soil covers about 15,000 square miles. In the east the soil is generally fertile, even to the tops of the mountains; but, owing to its rugged surface, it is not well adapted to successful farming. All of this, however, is rich in timber and minerals.

Natural Resources. The state abounds in minerals of various kinds, the chief ones being bituminous and cannel coal, iron ore, petroleum, natural gas, asphalt, various kinds of building stone, pottery clay, terracotta and firebrick clay, molders and glass sands, pigment earths, lead, zinc and fluorspar. The coalfields cover 16,000 square miles, and the coal is mostly of superior quality. Cannel coal is found in several counties, and is mined in considerable quantities, most of it being shipped to Europe. Railroads are being rapidly built throughout the coal regions, thus bringing increased quantities yearly into market. Coal in the eastern counties is mined at low cost; no deep shafts and corresponding machinery are required; the strata show themselves in the sides of the mountains from which the coal is easily and rapidly secured and loaded into cars. In the lower parts of the coalfields four strata of iron ore are found. These ores yield from 33 to 53 per cent. of metallic iron. The ore and fuel for smelting it are found near each other, and hence require no long transportation to prepare the iron for market. Bessemer steel can be made from ores found within less than 75 miles of vast deposits of coking coal. The development of the coal and iron industries is large, and is increasing rapidly.

Petroleum is found in large quantities in several counties in the southeast. Portland cement and asphalt in large quantities and zinc, lead and fluorspar are found in different localities. Building-stones of various kinds are found in exhaustless quantities, and are not excelled in quality. Few states surpass Kentucky in the extent and quality of its hardwood forests. In the eastern part the river and creek valleys and the sides of the mountains are covered with a heavy growth of walnut, cherry, oak, poplar, chestnut, white and blue ash, birch, linden and white hickory. Through the central part there is very little timber of any kind, nearly all the land being in cultivation. In western Kentucky are found large forests of hickory, poplar, pine, chestnut and several varieties of oak.

Agriculture. This is the chief industry. More than 14,350,000 acres are under cultivation. The farm-products are varied, and several are produced in great abundance. The chief products are barley, buckwheat, corn, oats, rye, wheat, cotton, flax, hemp, sorghum, hay, tobacco and vegetables. Nearly 5,000,000 acres are devoted to corn, wheat, hay, hemp and tobacco. Kentucky produces nearly half the tobacco of the United States. The yield in 1910 was over 381,000,000 pounds, an average of 810 per acre. The yield of corn was 105,270,000 bushels and that of wheat about 10,000,000 bushels. The state produces six times as much hemp as the remainder of the union. The orchard products are apples, peaches, apricots, cherries, pears and plums. Grapes are grown abundantly in almost all quarters. Stockraising is carried on extensively and is very profitable. Horse-breeding is one of its most important and profitable industries, and brings vast sums of money. Kentucky thoroughbreds are famous throughout the world. Thousands of mules are raised and shipped annually, to the cotton states. Large herds of the finest strains of cattle (notably the Durham and Herefords) are to be seen in many counties. Sheepraising is becoming very profitable, and the proportions of this industry are increasing yearly.

Manufactures. Kentucky has excellent natural facilities for manufacturing; her immense hardwood forests, her vast coalfields and her extensive natural waterways afford opportunities for profitable investment in almost all kinds of manufactured products. The increase for the last ten years, in all these lines, has been marvelous. The chief manufacturing cities are Paducah, Henderson, Owensboro, Louisville, Newport and Covington, all on the Ohio River. Louisville, at the falls of the Ohio, is rapidly becoming one of the most important manufacturing cities in the Union. Here are some of the largest plants in the world for the production of plug-tobacco, snuff, cigars, wagons, buggies, carriages, furniture and all kinds of farming implements. Manufacture of famous Kentucky whiskey is a large industry. The internal revenue from this source is over $20,000,000 annually.

Commerce. The commerce has increased nearly a hundredfold in the past decade. Besides horses, mules, cattle, sheep and swine, the leading articles of commerce are tobacco, flour and gristmill products, lumber of all kinds, liquors, iron and steel goods, leather, clothing, cars, cottonseed oil and dressed meats.

Education. Kentucky has provided and is supporting a uniform system of public schools which are required to be taught six months in the year, and which all children between the ages of six and twenty years are entitled to attend. The state pays liberally for the support of these public schools, the per capita of 1911 being $4.40. There are about 9,000 elementary public schools. These are divided into eight grades, requiring from eight to ten years for their completion. The number of children reported in 1911 within the school age was 739,684. The same provision is made for the colored children as for the whites, but they must be taught in separate schools and by colored teachers.

The state school fund in 1911 amounted to $3,500,000. This, in some of the counties and in nearly all the towns and cities, is supplemented by local taxation, so that their schools are taught from eight to ten months each year and their teachers receive higher salaries. The average salary of teachers in the rural districts is about $50 per month. Kentucky has two superior normal schools for the training of teachers, one located in Richmond, Madison County, in the east, and the other in Bowling Green, Warren County, in the west. The state also supports a university in Lexington, which is attended by nearly 1,000 students annually, and schools for the blind, deaf and dumb and the feeble-minded. A normal and industrial school for the negroes, located in Frankfort, is largely attended. Tuition is free, and the teachers, 17 in number, are paid by the state. Among the most noted of the colleges and universities are Kentucky University at Lexington, Georgetown College in Georgetown, Berea College at Berea, Bethel College in Russellville, Central University in Danville and Kentucky Wesleyan College in Winchester. Most of these are well-endowed, and do thorough and efficient work.

There are no works available for the Kentucky collection.