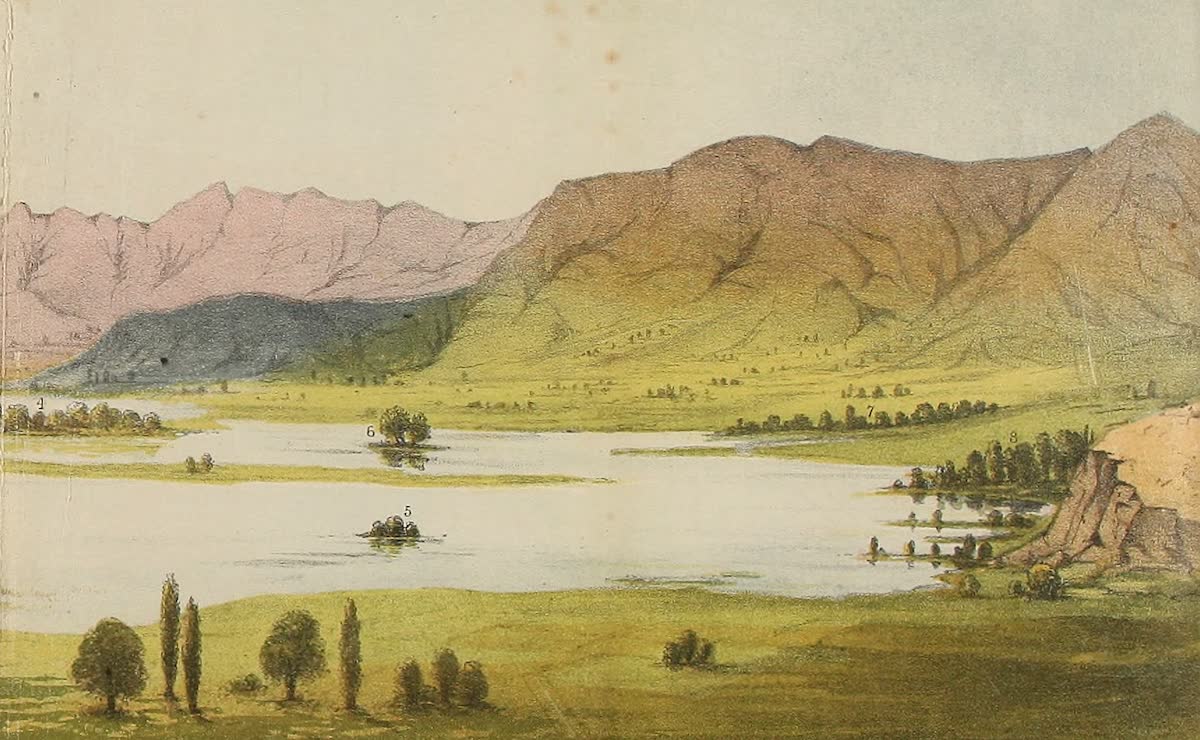 Kashmir, or Cashmere, a native state of India, including much of the Himalayan mountain system to the north of the Punjab.

It has been fabled in song for its beauty (e.g. in Moore’s Lalla Rookh), and is the chief health resort for Europeans in India, while politically it is important as guarding one of the approaches to India on the north-west frontier. The proper name of the state is Jammu and Kashmir

Kashmir is bounded on the north by some petty hills chiefships and by the Karakoram mountains; on the east by Tibet; and on the south and west by the Punjab and North-West Frontier provinces. The remainder of the state consists of uninhabited mountains, and its only really important possessions are the districts of Jammu and Kashmir.

Its territories in the early 20th century comprised the provinces of Jammu (including the jagir of Punch), Kashmir, Ladakh, Baltistan and Gilgit; the Shin states of Yaghistan, of which the most important are Chilas, Darel and Tangir, are nominally subordinate to it, and the two former paid a tribute of gold dust.

Jammu, or Jummoo, the capital of the state of Jammu and Kashmir in Northern India, on the river Tavi (Ta-wi), a tributary of the Chenab. Pop. (1901), 36,130. The town and palace stand upon the right bank of the river; the fort overhangs the left bank at an elevation of 150 ft. above the stream. The lofty whitened walls of the palace and citadel present a striking appearance from the surrounding country.

Extensive pleasure grounds and ruins of great size attest the former prosperity of the city when it was the seat of a Rajput dynasty whose dominions extended into the plains and included the modern district of Sialkot. It was afterwards conquered by the Sikhs, and formed part of Ranjit Singh’s dominions. After his death it was acquired by Gulab Singh as the nucleus of his dominions, to which the British added Kashmir in 1846. It is connected with Sialkot in the Punjab by a railway 16 m. long. In 1898 the town was devastated by a fire, which destroyed most of the public offices.

The state of Jammu proper, as opposed to Kashmir, consists of a submontane tract, forming the upper basin of the Chenab. Pop. (1901), 1,521,307, showing an increase of 5% in the decade. A land settlement has recently been introduced under British supervision.

In the time of Asoka, about 245 B.C., one of the Indian Buddhist missions was sent to Kashmir and Gandhara. After his death Brahmanism revived. Then in the time of the three Kushan princes, Huvish?a, Jushka and Kanishka, who ruled over Kashmir about the beginning of the Christian era, Buddhism was to a great extent restored, though for several centuries the two religions existed together in Kashmir, Hinduism predominating. Yet Kashmir, when Buddhism was gradually losing its hold, continued to send Buddhist teachers to other lands. In this Hindu-Buddhist period, and chiefly between the 5th and 10th centuries of the Christian era, were erected the Hindu temples in Kashmir.

In the 6th and 7th centuries Kashmir was visited by some of the Chinese Buddhist pilgrims to India. The country is called Shie-mi in the narrative of To Yeng and Sung Yun (578). One of the Chinese travellers of the next century was for a time an elephant-tamer to the king of Kashmir. Hsüan Tsang spent two years (631-633) in Kashmir (Kia-chí-mí-lo). He entered by Baramula and left by the Pir Panjal pass. He describes the hill-girt valley, and the abundance of flowers and fruits, and he mentions the tradition about the lake. He found in Kashmir many Buddhists as well as Hindus. In the following century the kings of Kashmir appear to have paid homage and tribute to China, though this is not alluded to in the Kashmir chronicle. Hindu kings continued to reign till about 1294, when Udiana Deva was put to death by his Mahommedan vizier, Amir Shah, who ascended the throne under the name of Shams-ud-din.

Of the Mahommedan rulers mentioned in the Sanskrit chronicles, one, who reigned about the close of the 14th century, has made his name prominent by his active opposition to the Hindu religion, and his destruction of temples. This was Sikandar, known as But-shikan, or the "idol-breaker." It was in his time that India was invaded by Timur, to whom Sikandar made submission and paid tribute. The country fell into the hands of the Moguls in 1588. In the time of Alamgir it passed to Ahmad Shah Durani, on his third invasion of India (1756); and from that time it remained in the hands of Afghans till it was wrested from them by Ranjit Singh, the Sikh monarch of the Punjab, in 1819. Eight Hindu and Sikh governors under Ranjit Singh and his successors were followed by two Mahommedans similarly appointed, the second of whom, Shekh Imam-ud-din, was in charge when the battles of the first Sikh war 1846 brought about new relations between the British Government and the Sikhs.

Gulab Singh, a Dogra Rajput, had from a humble position been raised to high office by Ranjit Singh, who conferred on him the small principality of Jammu. On the final defeat of the Sikhs at Sobraon (February 1846), Gulab Singh was called to take a leading part in arranging conditions of peace. The treaty of Lahore (March 9, 1846) sets forth that, the British Government having demanded, in addition to a certain assignment of territory, a payment of a crore and a half of rupees (1, 1/2 millions sterling), and the Sikh government being unable to pay the whole, the maharaja (Dhulip Singh) cedes, as equivalent for one crore, the hill country belonging to the Punjab between the Beas and the Indus, including Kashmir and Hazara. The governor-general, Sir Henry Hardinge, considered it expedient to make over Kashmir to the Jammu chief, securing his friendship while the British government was administering the Punjab on behalf of the young maharaja.

Gulab Singh was well prepared to make up the payment in default of which Kashmir was ceded to the British; and so, in consideration of his services in restoring peace, his independent sovereignty of the country made over to him was recognized, and he was admitted to a separate treaty. Gulab Singh had already, after several extensions of territory east and west of Jammu, conquered Ladakh (a Buddhist country, and till then subject to Lhasa), and had then annexed Skardo, which was under independent Mahommedan rulers. He had thus by degrees half encircled Kashmir, and by this last addition his possessions attained nearly their present form and extent. Gulab Singh died in 1857, and was succeeded by his son, Ranbir Singh, who died in 1885. The next ruler, Maharaja Partab Singh, G.C.S.I. (b. 1850), immediately on his accession inaugurated the settlement reforms already described. His rule was remarkable for the reassertion of the Kashmir sovereignty over Gilgit (q.v.). Kashmir imperial service troops participated in the Black Mountain expedition of 1891, the Hunza Nagar operations of 1891, and the Tirah campaign of 1897–1898. The total revenue of the state is about £666,000.