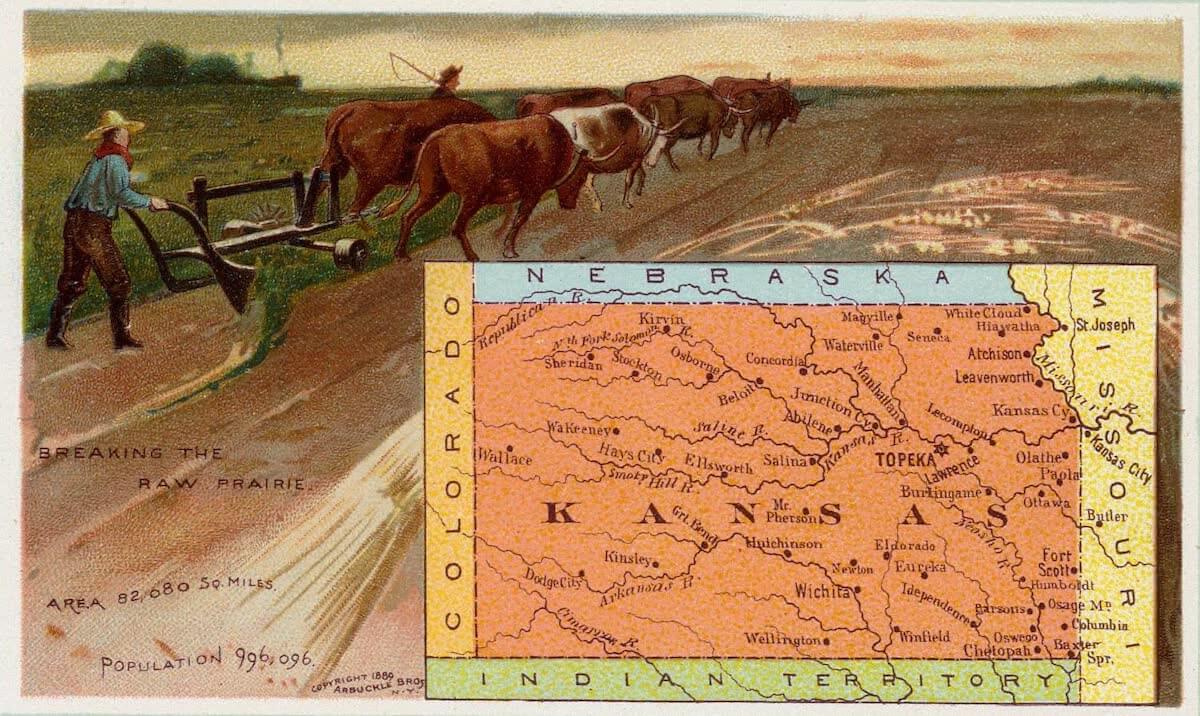 Kansas was admitted in 1861 as the 34th state of the Union. It is the central state, nearly equidistant between the Atlantic and Pacific oceans and from the northern and southern boundaries of the United States, and is bounded on the north by Nebraska, on the northeast and east by Missouri, on the south by Oklahoma and on the west by Colorado. Popularly, Kansas is known as the Sunflower State.

It comprises an area of 82,144 square miles, extending 400 miles from east to west and 208 miles from north to south, practically all arable land. Its area is 60 per cent. greater than that of England and 175 per cent. larger than that of Scotland. New York and Maine together, or Indiana and Ohio united, would not equal its area, and it is larger than all New England, with Delaware and Maryland added.

With the exception of a fraction in the southwest corner, Kansas was a part of the Louisiana Territory, sold to the United States by Napoleon in 1803, and then inhabited by Indians. The white pioneers endured great privations, hardships and peril. To protect the frontiersmen the government established military posts, the first being at Cantonment Martin, Atchison County, in 1818. Fort Leavenworth was established in 1827, and later Fort Scott and Fort Riley, the first and last still being among the most important of the country's military posts.

Kansas became a territory and was formally opened for settlement in 1854 by the Kansas-Nebraska Act, which repealed the Missouri Compromise and anticipated the extension of slavery on American soil. It was specified, however, that the electors of Kansas should decide whether it be a free or slave state. The friends of freedom and adherents of slavery at once inaugurated a vigorous campaign to settle the question according to their respective views. At the outset fraud and illegal methods characterized elections, turning the battle of ballots into one of bullets and changing the situation to one of violence and fierce contention.

The bitter strife continued, increasing in intensity, and with the admission of Kansas to the Union on January 29, 1861, carrying a provision in its constitution for the prohibition of slavery, the great conflict of arms between the northern and southern states was begun. When war was declared, Kansas showed her loyalty by furnishing soldiers in excess of her quota and greater than the total of her voters. Thus it was that, as a territory and during the first years of statehood, Kansas was involved in almost continual warfare. This, with the hostility of the Indians and other vicissitudes, greatly retarded development, but the return 01 peace and the homecoming of the surviving veterans, with the immigration of other settlers attracted by the state's possibilities, marked the beginning of epoch-making progress.

Geography. The surface is a gently undulating plain, having a gradually increasing altitude from 750 feet at Kansas City on the Missouri to 3,906 feet at the western or Colorado border. In soil there is much diversity; from the dark, deep loam of limestone land, common in the eastern third, to the "plains" and sandy formations further west. Their comparative fertility is an unsettled problem.

Drainage. The state is watered and drained by several important non-navigable streams, viz: The Kansas (or Kaw), Arkansas, Republican, Solomon, Blue, Smoky Hill, Marais des Cygnes, Saline, Neosho, Medicine and Cimarron, besides innumerable smaller rivers and creeks. The larger streams in the main flow eastward or to the southeast, finding their outlets in the Missouri or the Arkansas.

Climate. The climate is without tropic heat or arctic cold. Extremes in weather, when occurring, are of short duration, and farm operations as a rule may be comfortably pursued almost without interruption throughout the year. The average temperature of December, January and February for 20 years has been 31° F.; of the three summer months 74°; and the annual average 53°. The average rainfall in the eastern third of the state for 20 years was 35.66 inches annually, gradually decreasing further west. For the whole state the annual precipitation has averaged 28 inches.

Agriculture. Kansas essentially is an agricultural state. The western portion for years was largely given over to grazing purposes, and in the early days it was not regarded as adapted to other uses, but as the population increases it is being more thickly inhabited, and general farming there has advanced materially and steadily pushed the line of reliable productivity to the western limits. These developments have come about through the increased skill of the farmer, whose general intelligence has been enlarged by the judicious agricultural educational system maintained and liberally supported, largely by the state. An element in this is the state's Board of Agriculture, with offices in the Capitol at Topeka, which by its distribution of instructive and practically helpful literature to farmers is unique among such institutions and quite distinct from the agricultural college and experiment stations. Numerous farmers' institutes and other kindred organizations have, too, their helpful influences.

In the middle portion are the famous wheat-growing counties, and in the eastern half the great corn- and clover-counties, although corn and wheat are grown in every county, as is, with two or three exceptions, alfalfa, without doubt the state's most valuable forage-plant. The growing appreciation of alfalfa is indicated by its increased area since its considerable introduction about 1890 to 956,962 acres in 1909, placing Kansas first in acreage and production. Beetgrowing for sugar-making is a new feature, beginning experimentally in 1901. In 1906 one of the most modern beet-sugar factories in the world in construction and equipment was erected in western Kansas at Garden City, the center of activity in sugar-beet territory.

Kansas has inexhaustible supplies of pure water 10 to 200 feet beneath the surface, available for irrigation by windmill or other power, and this is being utilized extensively in numerous localities. Water from the Arkansas River and its underflow irrigates considerable areas in its fertile valley, although only a small portion of the total cultivated area is irrigated, and this is confined almost entirely to the valleys in the more western counties. Scarcely 50 per cent. of the area is under the plow, but the value of the total farm-products in 1909, with live stock on hand, was over $460,000,000. Statistics indicate the diversity of conditions by the variety of crops grown, there being annually reported cotton, hemp, flax, tobacco, sugar-beets, sorghums, broom-corn, Indian corn, wheat and other cereals and crops. The state perhaps is most conspicuous, however, as a wheat-raiser, and in the production of this grain ranks first. The yield in 1901 was nearly 100 million bushels, the greatest production by any state in one season. In the ten years ending with 1906 the state produced 707,480,388 bushels of wheat worth $424,339,237. By far the greater proportion of the wheat is grown in the central counties, popularly referred to as the wheat-belt. It is the corn crops, however, that have made the commonwealth rich, as it is on this crop that the immense meatmaking industries most largely depend. The largest yield was 273,888,321 bushels in 1889, and the most valuable was worth $78,321,653 in 1902. The area annually devoted to corn averaged in the ten years ending with 1906, 7,121,300 acres. The following table shows the quantities and values of several of the state's field crops in 1910:

Manufactures and Mining. Many establishments, as those for glassmaking, brick, cement and smelting, have recently grown up in southeastern Kansas as the result of the development of its zinc, oil and gas-bearing fields. Natural gas has given great impetus to such industries. Cement factories are operating on extensive scales, with large capital invested in their properties. The smelting and refining of zinc in 1909 amounted to $10,857,000, and in this industry Kansas has long ranked first. Besides vast deposits of natural gas, petroleum, lead and zinc, the state's coal is mostly mined in the southeast, and the value of the output in 1910 was $7,914,709. Quarries of superior limestone, sandstone and gypsum are worked in the more central counties; underlying many of these is a seemingly inexhaustible saltbed; and but two states surpass Kansas in salt production.

Railroads. Of railroads Kansas has more than 10,838 miles. Of the 105 counties one hundred have one or more railroads, and, excepting seven, all county-seats have one or more. Admirable natural roads, passable everywhere throughout the year, afford expeditious and comfortable travel and enable the marketing of farm-products at all seasons.

Population. The state is divided into 105 counties; the smallest county is Wyandotte, with 153 square miles, but first in population, with 100,068 inhabitants, including Kansas City, the state's metropolis and the seat of the second largest livestock market and of the second most extensive meat-packing industries in the world. The last census, of 1910, showed the population of the state to be 1,690,049.

Education. The laws are liberal and just, favoring sobriety, morality, industry, wholesome living and home-making. The manufacture and sale of intoxicating liquors, except for medical, scientific and mechanical purposes, is forever prohibited by a constitutional provision adopted in 1880. Intelligence is encouraged by liberally providing educational institutions and providing liberally for their support. Besides high schools in numerous counties and in all the cities and larger towns and the many colleges and academies, the state in 1910 had 9,300 free public-school houses, where 398,746 pupils were enrolled and 13,467 teachers employed, at an annual outlay of $5,773,342 for salaries. The schoolhouses and school-property are valued at $20,891,590.

The University of Kansas, at Lawrence, takes rank with like institutions in older states, and the same is true of the Kansas Normal, at Emporia, while the Agricultural College, at Manhattan, is claimed to stand, in attendance, at the head of such colleges in the United States, having about 1,700 students (1910-11) and a teaching staff of 80. Many important denominational schools and colleges are liberally endowed and supported, and have a large attendance. The school for the education of deaf-mutes is at Olathe; that for the education of the blind, at Kansas City. Besides these there are the state's school for feeble-minded youth at Winfield; Soldiers' Orphans' Home at Atchison; Soldiers' home at Dodge City; Industrial reformatory at Hutchinson; Industrial school for girls at Beloit; Industrial school for boys at Topeka; Hospitals for the insane at Topeka and Osawatomie; Hospital for epileptics at Parsons; and penitentiary at Lansing. The federal government maintains a military prison and a national soldiers' home near Leavenworth.

There are no works available for the Kansas collection.